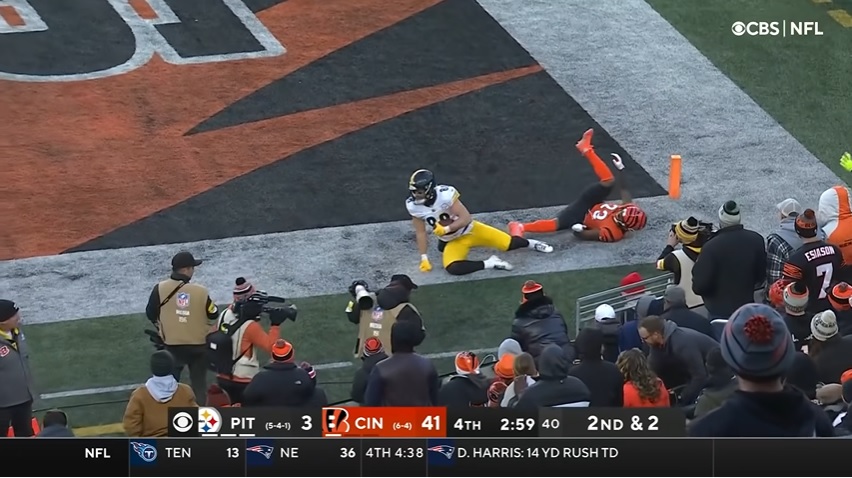 The Pittsburgh Steelers traveled to Cincinnati Sunday afternoon for a division clash with the Bengals with hopes of getting right back into the thick of it for the AFC North crown. Those hopes were quickly diminished as the Bengals put it on Pittsburgh early, jumping out to a 31-3 lead by intermission and finished the day handing the Steelers a miserable 41-10 loss. It was Pittsburgh’s biggest loss the Steelers have taken in years, showing little fight on the defensive side of the football as well as incompetent play on the offensive side of the ball to sustain any sort of steady play running the football.

With all the issues Pittsburgh had in this shellacking, rookie TE Pat Freiermuth continued to showcase his talent that made Pittsburgh select him in the second round of the 2021 NFL Draft with another strong performance despite the circumstances. Freiermuth has become a go-to target for veteran QB Ben Roethlisberger, posting incredible efficiency numbers when the two link up in the passing game. Freiermuth is a reliable target that is regularly sure handed, being a great security blanket like we see on this pass play on third down where Ben checks it down to Freiermuth in the flat who then turns up field, making one defender miss and fights through contact to pick up the first.

Freiermuth’s next reception didn’t come until the fourth quarter when the game was well out of reach, but he still played hard, trying to move the chains and keep the offense moving. Ben Roethlisberger stated in his postgame interview that he liked the heart and character Freiermuth and Diontae showed late in the game with the victory well out of reach. We see that on this check down reception on 3rd-and-21 where Ben throws short to Freiermuth who turns up field and throws one defender off coming in to chop him down and then keeps fighting forward after being met by a host of Bengal defenders, trying to get every last yard possible.

Freiermuth has a natural acumen as a receiver you don’t often see from rookie TEs, being able to line up in-line, as an H-Back, in the slot, and even out wide and be effective both over the middle and up the sideline. He is a well-versed route runner than can get out of his breaks and can make the contested catch. Check out this reception over the middle of the field from the slot where Freiermuth whips back to the ball quickly, catching the pass from Ben while getting hit by the defensive back, holding onto the pass, and setting up third-and-short for the offense.

Freiermuth produced Pittsburgh’s lone touchdown of the game late on an impressive catch in the end zone. Watch as Freiermuth lines up split out wide at the bottom of your screen and gives the defender a stutter-and-go route, hesitating inside then breaking up the sideline into the end zone, tracking the ball in the air and battling through tight coverage to stretch out his right arm and bring the ball into his chest while the slot corner runs in and puts his shoulder on Freiermuth’s head, coming down with the catch in-bounds and maintaining possession of the ball for the score.

Here is a zoomed-in version of the play, showing Freiermuth’s concentration on the ball and the heart to make the difficult catch in traffic knowing fully well that he is going to get lit up by the defender flying in from the side. Freiermuth would end up getting evaluated for a concussion after this play as you see #35 Jalen Davis run his shoulder clear through Freiermuth’s helmet.

As reported by Alex Kozora after the game, Pat Freiermuth tied Heath Miller’s rookie mark of six TD catches with his TD late against the Bengals. That puts Freiermuth just one TD away from tying the Steelers’ record, set by Eric Green in 1990. Six TDs currently ranks third in the entire NFL by the TE position. For the season, Steelers rookie TE Pat Freiermuth has 40 receptions for 327 yards and six touchdowns. There is no denying that he needs to get stronger and improve as a blocker in the running game, but this is often the case for most rookie TEs transitioning from college to the pros.

While the argument can be made whether Freiermuth was the right pick over Creed Humphrey in the second round of the 2021 NFL Draft, he has proven to be a fantastic selection for the Steelers as the TE of the future in Pittsburgh for the foreseeable future. He reliability and versatility as a pass catcher cannot go understated as he is arguably having a better rookie season than Atlanta Falcons TE Kyle Pitts who was selected #4 overall this past spring. For splitting snaps early on with Eric Ebron, Freiermuth has come on strong the last several weeks, cementing himself as a key contributor in the passing game that Roethlisberger trusts.

It remains to be seen what direction Pittsburgh will take following the 2021 season regarding the QB position, but having a young, talented TE like Freiermuth who is only going to get better must be a reassuring thought for whoever is under center come 2022. A core of Freiermuth, Diontae Johnson, Chase Claypool, and Najee Harris is quite a set of weapons to work with all still on their rookie deals. Obviously, Pittsburgh must weather the storms they are currently facing this season regarding the stagnant offense, but should they work out the offensive system and the future of the QB position, Freiermuth looks to be the real deal as a future stalwart on offense for the Pittsburgh Steelers.

What are your thoughts on Pat Freiermuth’s performance against the Cincinnati Bengals? Do you think he has proven himself as that franchise TE in Pittsburgh? What do you think his ceiling can be going forward? Please leave your thoughts in the comments section below and thanks again for reading!