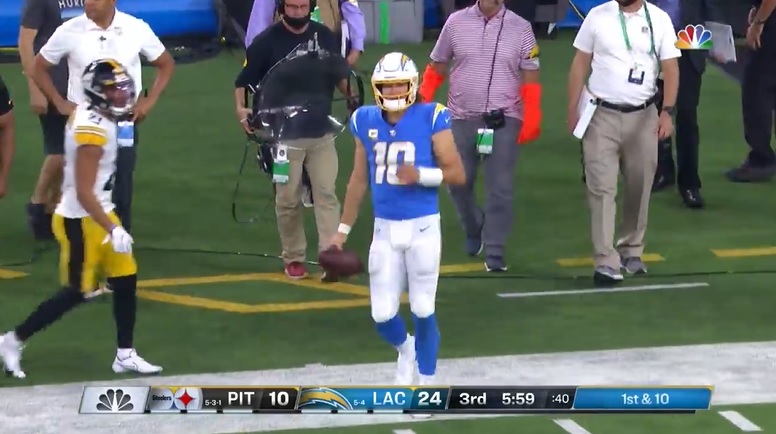 Mobility seems to be at the tip of Mike Tomlin’s tongue throughout the season, nothing the uptick in league-wide QB mobility and all the benefits it brings. More aggression 4th down, the designed run game options, and another answer when a defense has taken away all passing options. Pittsburgh felt the brunt of the latter Sunday night from Los Angeles Chargers’ QB Justin Herbert, who ran for 90 yards, tied for the 4th most rushing yards by a QB against the Steelers since 1950.

Scrambled really is the more accurate word. All those yards came off scrambles, not designed runs, and they broke the Steelers’ back time and time again. Four in particular really hurt Pittsburgh. Painful as it may be, let’s talk about them.

First one comes mid-way through the 2nd quarter, the Steelers down 7-3. Chargers facing 3rd and 6. Pittsburgh in their nickel package, playing man coverage. The Steelers rush four. Coverage seems to do their job but Herbert steps up and runs to his left. LB Joe Schobert is in man coverage on the RB and takes him to the left flat as Herbert crosses the LOS, picks up the first down, and gets 18 yards out of it.

It is harder to clog up escape lanes with just four rushers, that’s just a numbers game (usually a gap open, four rushers versus five blockers) and Herbert takes off. Because of the downfield man coverage, the secondary is late to react to Herbert’s wheels and it creates additional run-after.

The next comes later on the same drive. 1st and 10 from the Steelers’ 42. Playaction and the Steelers bring pressure/run blitz. But Devin Bush and practice-squad elevatee Delontae Scott (#50) get into the same gap, losing contain and allowing Herbert to roll to his right. He looks downfield, sees nothing, and takes off, again netting 18 yards. 36 yards off Herbert’s legs on this drive.

This is on Scott, not Bush.

Third quarter. Another third down in Steelers’ territory. Chance to get off the field and keep points off the board. Four man rush. Alex Highsmith beats the RT here, flushing Herbert to his left. This should be a pressure/sack/incompletion. To the top, Cam Heyward and Taco Charlton appear to be running a game, a T/E stunt with Charlton slanting inside and Heyward looping over the top (or Heyward is trying to compensate for Charlton rushing inside here, hard to tell). But Heyward lacks the foot speed to contain Herbert, who gets the edge, runs away from Heyward and Highsmith, and picks up the first down, a 13-yard gain.

Again, with the Steelers playing man-to-man, backs are turned, eyes aren’t on the quarterback, and it pits Herbert against the pas rush. A matchup Herbert won over and over.

Last one. The big one. 4th quarter, 3rd and 5, Steelers down a touchdown. Great get-off down chance. Pittsburgh in dime, again in man-coverage. Another four-man rush. Like the first example, Herbert is able to climb the pocket and find clean space, using his legs and running with a big lane.

Again, with the Steelers playing man coverage, the DBs are late to find Herbert. And it doesn’t help that James Pierre and Arthur Maulet run into each other in the middle of the field, injuring Maulet and shaking up Pierre.

Terrell Edmunds misses the tackle downfield and it takes Cam Heyward chugging along to save the touchdown. A 36-yard gain, the Chargers score against a gassed Steelers’ defense the next play.

The four-man rush makes it tough for the defense to contain things but it looks like either a failed game between the Steelers’ defensive linemen or Cam Heyward getting out of his gap, doing a little too much to try to make a play in a big spot.

Three drives, four runs, all of which resulted in points for the Chargers. Two touchdowns and a field goal. Pittsburgh had chances to get stops here on all three of these drives. But the Steelers lacked any good answers. Send additional pressure and risk leaving a young, injured secondary 1v1 against the Chargers’ great weapons. Drop seven, rush four, and Herbert was escaping the pocket and making plays with his legs.

But the lack of contain here isn’t a new issue and it was a big reason for the defensive struggles. And probably one of many reasons why Mike Tomlin and the Steelers will hold QB mobility in high regard when they search for a new starter next season. It’s games like these that really leave a mark and Pittsburgh has struggled to contain mobile throwers all season long.