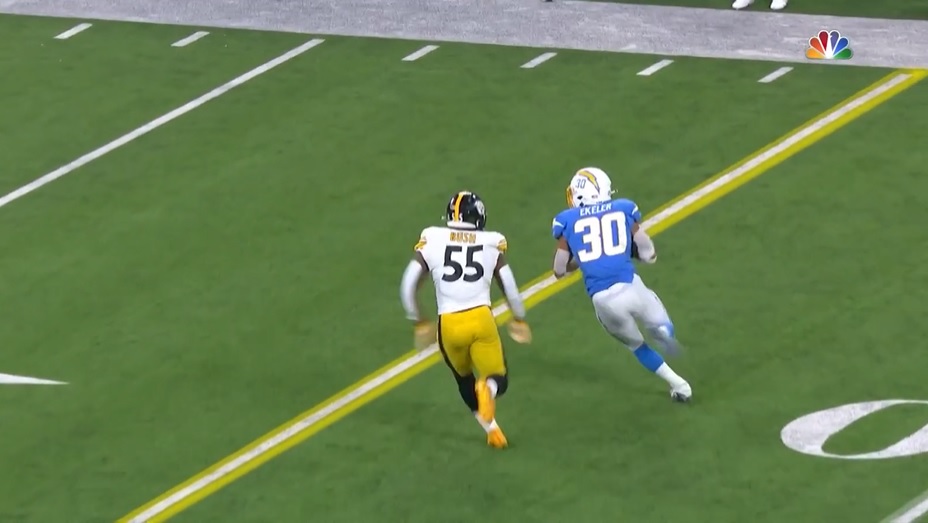 The Pittsburgh Steelers suffered a heartbreaking loss to the hands of the Los Angeles Chargers Sunday night by a score of 41-37, falling just short of pulling of an improbable comeback in the fourth quarter. It’s crazy to imagine Pittsburgh having the ability to score 37 points, the most of the season, given the problems this offense has have over the past calendar year. However, an offensive explosion was necessary as the defense had its worst statistical outing in the regular season since 2013, allowing over 500 yards of total offense and 41 points up on the board with several impact players out of the lineup on the defensive side of the football for Pittsburgh.

LB Devin Bush has notably been struggling as of late this season since coming back from ACL surgery last season, looking lost at times on the field and seemingly lacking that aggressive demeanor we knew him for coming out of Michigan back in 2019 and he displayed as a rookie and in his short stint of action in 2020 prior to the injury. However, Bush’s struggles culminated Sunday night in primetime, playing a big part in the onslaught of points by the Chargers.

Pro Football Focus highlighted Bush’s performance shortly after the game concluded, stating that he had a game to forget. He was given a negative grade on over 40% of his plays against the run and gave up six receptions on six targets in coverage for 67 yards (53 yards after the catch) and one touchdown.

Bush’s struggles against the run are highlighted on both of #30 Austin Ekeler’s TD runs in this contest, continuing to be slow to diagnose the play and fight off blocks to make a play. Watch on this first score on the ground by Ekeler as Bush correctly takes on the block by #87 Jared Cook but fails to shed the block to make a play on Ekeler running to his right shoulder, allowing him to run untouched into the end zone.

On Ekeler’s second TD of the night, Bush has his eyes in the backfield and starts to work to his left as Ekeler takes the handoff but counters back to the right side of the screen. Bush gets picked up immediately on the combo block by #70 Rashawn Slater climbing to the second level, engulfing Bush who watches as Ekeler plunges into the end zone for the score.

PFF gave Devin Bush a grade of 28.8 for his play Sunday night which expectantly was the lowest on the team and was the lowest of his NFL career. More specifically, Bush came out as the lowest-graded defender against the run and his coverage grade was second-worst only to rookie Tre Norwood. Bush failed to fight off blocks against the run once engaged by blockers at the point of attack, allowing runners to get into the second level and run untouched into the secondary.

For example, Pittsburgh has Los Angeles backed up inside their own five on this play, but once Ekeler takes the handoff, a wide running lane forms on the down block by Slater to wash out #99 Henry Mondeaux. Bush takes on #89 Donald Parham and has inside leverage to disengage the block and play chase to Ekeler coming through the hole, but he allows Parham to get a hold of his chest and run him clear into the secondary as Ekeler runs for first down yardage.

Here is another example of Bush getting covered up on the block by Slater climbing to the second level on this carry by #22 Justin Jackson. Notice how Bush does take responsibility for the left side A-gap on the play, forcing Jackson to go to his left as the rest of the defense rallies to the ball to hold him to a short gain. So all-in-all not a bad play by Bush on this rep.

In fact, there were moments Sunday night where we saw Bush execute in run defense the way he did prior to this season and the knee injury. Watch this counter run to the right side where Bush does a great job working laterally down the LOS into the gap and manages to wrap up Jackson who tries to cut back inside to evade Bush as he brings him down after a modest gain.

In pass coverage, there were also positive moments even on a couple of the completions where we saw the Devin Bush of old, opening up and running down the ball in space with the sideline-to-sideline speed that made Pittsburgh decide to trade up into the Top 10 to select Bush in the 2019 NFL Draft. On this reception by Austin Ekeler out of the backfield, Bush immediately reacts to the back running to the flat, closing ground on Ekeler and runs him down along the sideline for a short gain.

On this reception by Parham against this zone coverage look, Bush makes his drop and reads #10 Justin Herbert’s eyes as he works through his reads and breaks on the ball once thrown to Parham sitting in the soft spot of the zone, quickly wrapping him up and bringing him down to limit minimal YAC.

However, there were several key moments in coverage where Bush fell well short of the bar. Here on Los Angeles’s last drive of the game, we watch Bush come to pick up Ekeler running up out of the backfield. Bush freezes his feet and fails to make any contact with Ekeler who breaks to the left sideline, getting plenty of separation on Bush who runs a step behind as Ekeler catches the pass and turns up field for the long catch-and-run.

We see Ekeler exploit the matchup with Bush again on one of his two TD receptions earlier in the game in a similar way, first staying in the backfield as if he is going to pass protect, but then leaks out and beats Bush who allows far too much inside leverage on Ekeler’s route, giving Herbert the easy pitch-and-catch for Ekeler to scoot into the end zone for the TD.

Bush’s strength wasn’t as a coverage defender coming out of Michigan, but he showed improvement in that area of his game at times prior to the knee injury. Now, Bush appears to be a shell of his former self out there, both in coverage and as a defender against the run. There are moments where he shows flashes of the player, he was pre-injury, but his negatives far-outweigh his positives at this point, displaying a lack of processing and execution on the field along with questionable effort at times. It’s sad to see a player of Bush’s talent level regress as much as he has but having played 79% of the defensive snaps Sunday night, it may be time to reduce his role even more.

I doubt that Pittsburgh will sit Bush down completely in a full-out benching, but given his inconsistent play and lack of execution, it appears time to allow Robert Spillane and possibly rookie Buddy Johnson a chance to play to “change things up” as well as know what they have in-house before going into the offseason and potentially addressing the position via free agency or the NFL Draft. Bush obviously isn’t in a great headspace as of now and taking the pressure off him could pay dividends for his long-term outlook Regardless, things look bleak in terms of Bush’s prospects of getting his fifth-year option picked up this offseason. If he can’t figure it out soon, his days in Pittsburgh could potentially be numbered.

What are your thoughts on Devin Bush’s performance Sunday night against the Chargers? Do you think that his issues stem more from a mental component, his recovery from ACL surgery, a lack of effort, or a combination of these areas? Do you think that Bush can get these issues hammered out with more time? What should Pittsburgh due going forward this season and into the offseason regarding their inside linebacker room? Please leave your thoughts in the comments section below and thanks again for reading!