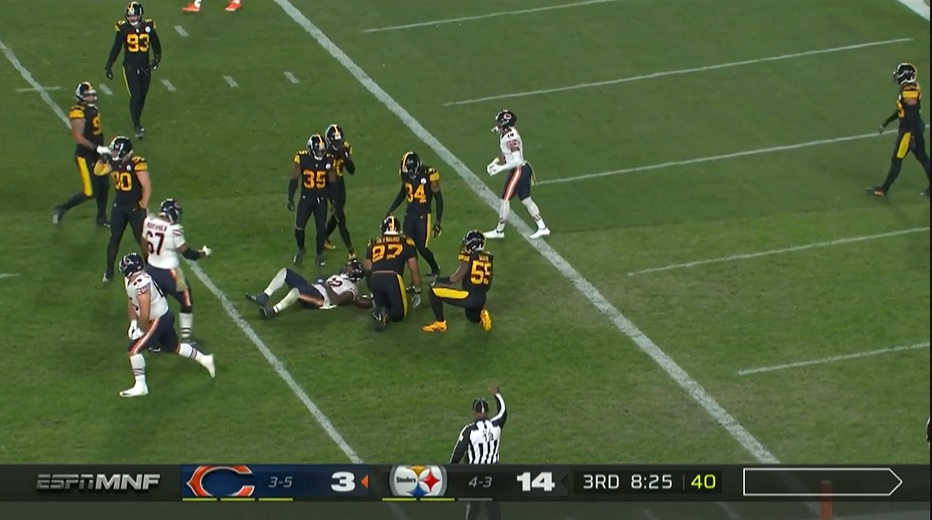 Cam Heyward can do it all. Play the run, rush the passer, bat passes down and now, based on the last two years, intercept the football. All while being a team captain and leader in that locker room. But to me, perhaps his most impressive trait is the fanatical effort he plays with. Chasing the ball hard down-to-down across the field in an attempt to make the play.

And boy did he Monday night.

After a questionable penalty wiped out a Jimmy Graham touchdown, Chicago faced 3rd and Goal from the 15, trailing Pittsburgh 14-3. They played it safe with a RB screen to the field side with David Montgomery. It was well-blocked and Pittsburgh struggled to rally to the ball, their DBs getting depth and carrying routes vertically.

It left Montgomery out in space with blockers in front, a clear path to the inside. But it was Heyward who ran hash to hash, took a great angle to the football, and made the tackle at the four for an 11-yard gain. The Bears settled for a field goal.

Take a look at the play with Heyward’s effort spotlighted.

If Heyward doesn’t run as hard as he did, if he doesn’t take a good angle to a runner obviously faster than him, Montgomery is putting the ball in the end zone. He has a receiver in front and with his size and bowling ball ability (power and contact balance were his calling cards coming out of Iowa State), this is going to be a touchdown. And who knows what happens from there.

Heyward’s effort is nothing new. His first D-line coach John Mitchell demanded big guys running to the football as much as anyone. He watched Aaron Smith and Brett Keisel do the same (though before Heyward’s time, I always remember this Super Bowl XL tackle by Smith). And now Heyward is the man young teammates watch. Like Isaiahh Loudermilk, who showed off his hustle against the Cleveland Browns.

Among all defensive linemen this season, Heyward is second in the league with four tackles 10+ yards downfield. He trails only Jacksonville’s Josh Allen, who is much smaller and more athletic. Among players 270+ pounds, Heyward is #1 in the league. That tackle on Montgomery was a big one though, one overlooked by many. Perhaps in part because of how routine it’s become for a guy like Heyward.