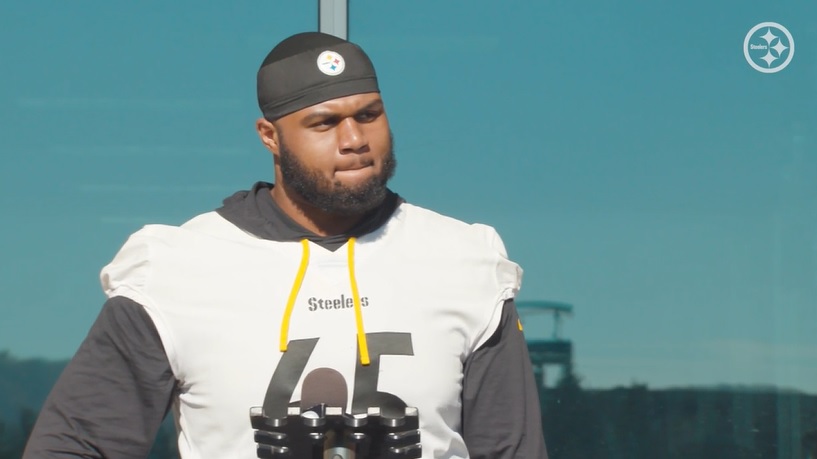 Dan Moore Jr. got more than just a T-Shirt for taking on and surviving the Myles Garrett experience Sunday afternoon. He got a victory. Though Moore’s performance was far from good, it’s better to take your lumps in a win than a loss. That’s how Moore is judging his outing against Garrett and the Browns last week.

He spoke to reporters Saturday about the job he did.

“It was mixed,” he said via Steelers.com. “He definitely got the better of me some plays. I thought I held my ground some plays.”

Garrett finished the day with *just* one sack but beat Moore several times in that game to the point where it was surprising to see the Steelers not try to give him more help. Moore was bailed out on at least one occasion, Najee Harris putting his face in the fan to give Ben Roethlisberger enough time on a 4th and Goal touchdown to Pat Freiermuth.

But like a baseball player who doesn’t let a hitting slump impact his defense, Moore made up for his pass pro woes with some excellent run blocking.

“Thought I played physical in the run game. Overall just trying to clean things up and fine-tune things in pass pro was really what this week was about.”

Moore had one of the best combo blocks of the game, as we noted in our o-line run game review. Despite his struggles, his confidence hasn’t wavered and he’s proven to be a hard worker and quick study.

Moore noted the added difficulty of playing on the road against Garrett, slowing his get-off due to crowd noise. He should have an easier time at home Monday night against Chicago, especially considering the Bears will be without Khalil Mack due to a foot injury.

For Moore, every matchup the rest of the season – the rest of his career – will be easier because of what he did last week against Garrett. That was as difficult a matchup he’ll ever face considering the circumstances of being a rookie on the road. Moore’s had his ups and downs this season but he’s been asked to play quicker than what the Steelers probably anticipated. Like he did against the Browns, he’s surviving, improving, and has a chance to be a long-term option at left tackle.