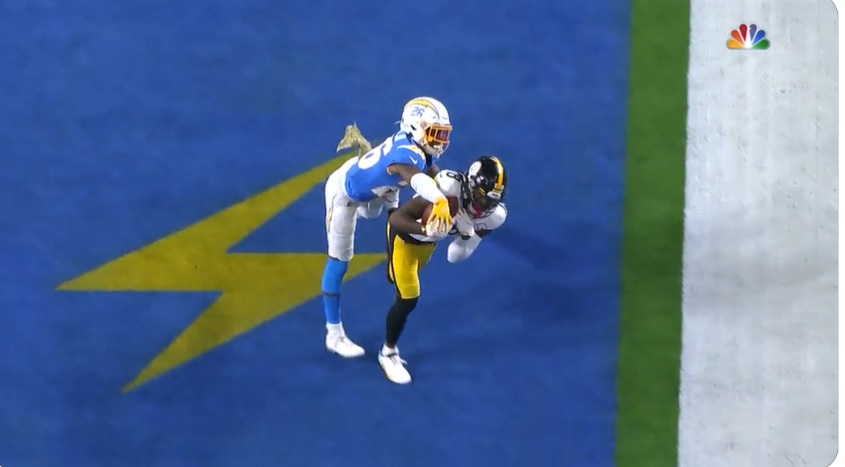 In a year of inconsistency and uncertainty for the Pittsburgh Steelers, third-year wide receiver Diontae Johnson has stood out in a major way in the black and gold.

Johnson, who struggled with drops and overall consistency and focus throughout the 2020 season, has completely flipped the narrative surrounding him as an inconsistent wide receiver who is a boom-or-bust guy into one that is a true, No. 1-type receiver that comes through in the clutch consistently for the Steelers.

That was again the case for Johnson Sunday night in Los Angeles against the Chargers on Sunday Night Football as Johnson finished with seven catches for 101 yards and a spectacular touchdown catch in the back left corner of the end zone over Chargers’ rookie cornerback Asante Samuel Jr., capping off a great late first-half drive for Pittsburgh.

With just one drop on the season, Johnson has shown that hard work and determination still goes a long way in the NFL, regardless of talent, as the third-year pro out of Toledo has become quarterback Ben Roethlisberger’s go-to receiver in any moment on the field. Steelers’ teammate and fellow wide receiver Chase Claypool spoke highly of Johnson during his media availability on Thanksgiving, praising Johnson for his work ethic and overall consistency in becoming a better receiver in his third season.

Steelers WR Diontae Johnson is on pace to catch 100 passes for 1,214 yards and 7 touchdowns.

2018 was the last time the Steelers had a player with 1000 or more yards receiving. #Steelers

“Yeah, it’s just his consistency and work ethic” Claypool said to reporters Thursday, according to video via Steelers.com.  “I think a lot of times after practice, before practice in general practice, you’ll see him catching tennis balls and doing some hand-eye coordination stuff. And you gain extra reps in. I think he does that partly and obviously to build skill, but another thing is to build confidence within himself. So, little things like that you can definitely do. We as receivers started catching tennis balls as well after we saw him do it for so long. So, little habits like that.”

It’s great to hear that Johnson is rubbing off on the rest of the wide receivers room with his work ethic and overall consistency this season, which will undoubtedly make the rest of the room better off down the stretch and throughout the rest of their careers.