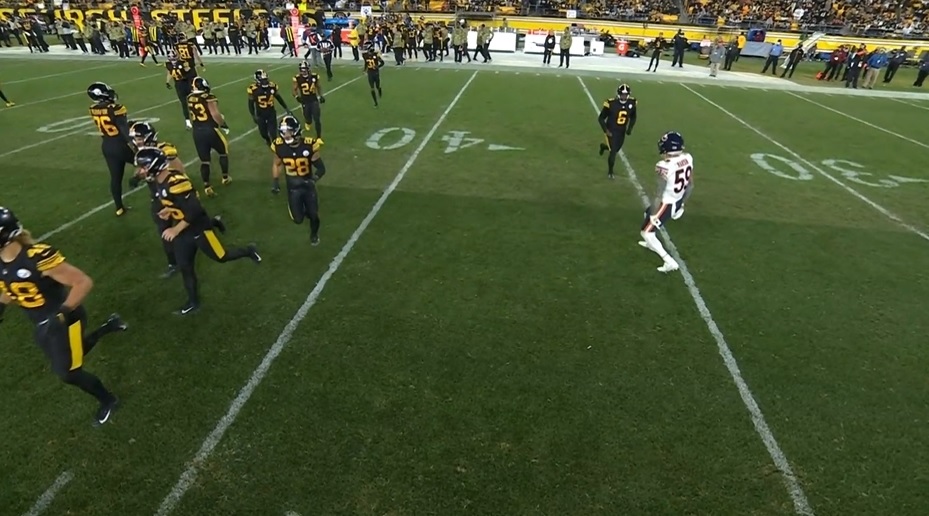 The Steelers-Bears Monday Night Football matchup featured quite the chaos. The referees seemed to at the forefront of a lot of controversy, including a few bad calls on the Bears.

None was more controversial and timely than the taunting penalty called on Cassius Marsh in the fourth quarter. Marsh, signed to the Bears active roster just hours before the game, made a crucial sack to force a punt.

After celebrating in direction of the Steelers sideline, taunting was called on Marsh. He discussed the penalty after the game.

”I think it was pretty clear to everyone who saw it that I wasn’t taunting. On my way to the sideline, I got hip checked by the ref and it’s pretty clear,” Marsh said via the Bears Twitter page.

Marsh was cut by the Steelers back in August and the Bears are his eighth NFL team. The sack would’ve given the ball back to the Bears, down 23-20. Instead, the Steelers’ drive stayed alive and led to a field goal.

Referee Tony Corrente’s “hip check” has been criticized as much as the taunting call in itself.

On the taunting penalty, Cassius Marsh says he was hip checked by referee Tony Corrente. He watched the video and called it, “Incredibly inappropriate.”

Marsh called the actions by Corrente “incredibly inappropriate”, mentioning the fine he would face if the roles were reversed. Even as a Steelers fan, it’s hard to argue against how bad of a call that was. The Steelers ended up getting three crucial points out of the drive.

Some speculated Corrente may have called the flag after contact was made between the two. In his post-game pool report, Corrente said that contact had “nothing to do” with the taunting flag.

“I didn’t judge that as anything that I dealt with,” had said in the pool when asked if the contact contributed to him throwing the flag.

Here is the full pool report with referee Tony Corrente after the #Bears-Steelers game: pic.twitter.com/nvAQODIFlZ

Corrente reiterated after the game that the call was due to him directionally taunting at the Steelers sideline. Taunting and unsportsmanlike conduct penalties as a whole have been cracked down on this season. While the call maybe technically followed the rule, it’s one that needs some tweaking.

After the game, Ben Roethlisberger said he did not remember the play, telling reporters Marsh was a good teammate and that he wished him the best. In fact, according to our training camp notes, Roethlisberger and Marsh walked out to practice together one day.

It was a controversial night for the officials. None bigger than that call that helped shape the win for Pittsburgh.