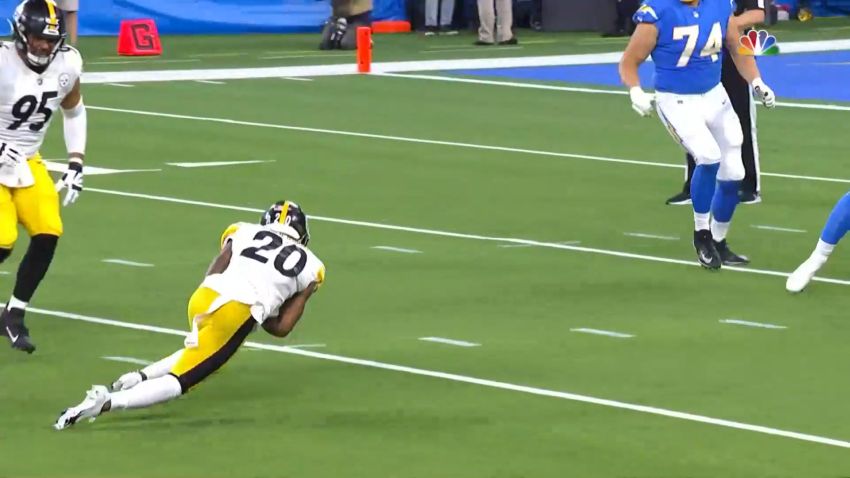 The Pittsburgh Steelers looked sunk for most of last night’s loss. While they still came out on the bottom, however, there was a time in the final frame where it seemed they just might have enough. And it took some splash plays to get there, starting with a blocked punt.

After the offense capitalized on that play, the defense responded with an interception of an unconventional nature. Cameron Heyward got his hands up against a Justin Herbert pass, though it actually bounced off of his helmet. The ball popped into the air, and cornerback Cameron Sutton came up with the giving pick, taking a shot from Chargers lineman Storm Norton in the process.

“It was either me or me. I was going to get it”, Sutton said of that moment when he saw the ball in the air. “I just seized an opportunity. Our d-line did a great job of getting their hands up where they had to throw the ball. Great anticipation from those guys upfront to get some rush and get their hands up. That’s just rush and coverage working together”.

It was Sutton’s first interception of the season, and fourth of his career, since being drafted in the third round in 2017, this during his first season as a starter. But of course, he credits the men in the trenches for it. “Obviously, I get the congratulations for catching the pick, but I don’t get the opportunity if we don’t do what we’re supposed to upfront, so hats off to those guys”, he said.

That interception gave Ben Roethlisberger and the offense possession on the Chargers’ 11-yard line, and they moved to the five on a roughing the passer call against Joey Bosa. Roethlisberger found rookie tight end Pat Freiermuth for the score two plays later, which tied the game 34-34 with 4:23 to play.

The defense stepped up on the subsequent possession, ultimately forcing a turnover on downs when Los Angeles head coach Brandon Staley elected to go for it on 4th and inches at his own 34, Joe Schobert the first on the scene, but cleaned up by others.

Unfortunately, the offense couldn’t finish the game, and ultimately settled for a go-ahead field goal that still left 3:24 on the clock. A blown communication in the secondary led to a quick 53-yard touchdown going the other way, however, on the Chargers’ subsequent possession, and Pittsburgh’s offense could not respond, taking back-to-back sacks and setting up 3rd and 29.

That would be all she wrote, but there were certainly enough plays made in the fourth quarter to put them in the game. They had the chance to win this won—literally with the lead with just minutes to play—before squandering it. A reminder that football is 60 minutes…and sometimes even 70 (but no more than that in the regular season; right, Najee?).