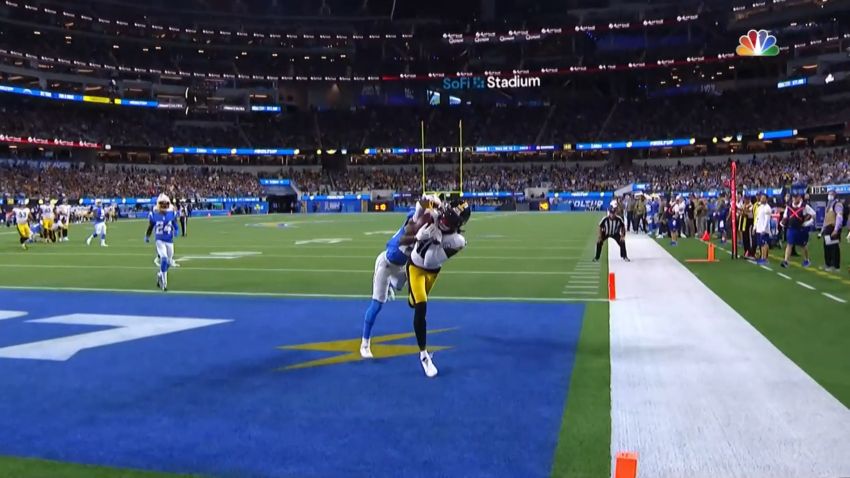 Topic Statement: Extending wide receiver Diontae Johnson should be a top priority in the offseason.

Explanation: Outside of the occasional mishap, Diontae Johnson is the closest thing the Steelers have to a reliable wide receiver. Games like Sunday’s effort show you that he has the talent to be a genuine number one weapon, even as he continues to strive for consistency.

JuJu Smith-Schuster is going to be gone. James Washington is going to be gone—and isn’t really much more than a bit part at this point. Chase Claypool hasn’t taken that second-year jump so many were expecting. Diontae Johnson has been the guy.

He has 59 receptions on the season despite missing a game, going for 714 yards with four touchdowns. No other wide receiver has more than one. And you can see that he’s still continuing to grow, now in his third season. He’s not at his peak.

Importantly, he has cut down on the mistakes. He only has one drop this year, or even zero, depending on which resource you want to use. He had that extremely frustrating fumble in overtime last week, but only after making a big play that frankly nobody else on this roster is making. They need this guy, including for the post-Ben Roethlisberger offense. The open guy wins.

First off, it’s too early to be saying what should be a priority, and an extension probably wouldn’t even happen until training camp, anyway. There is so much that can happen between now and then that could change perspectives. And they’ve more often been letting fringe foundational pieces play out their contract.

And there’s nothing wrong with letting him play out his contract. If he’s going to cash in, he’s going to cash in, anyway. Let’s be real, T.J. Watt signs the same contract as he did this year whether he’s a free agent or not. He got three years guaranteed. The point is, the Steelers pay top dollar to the right players whether they’re competing with other bidders or not. They’ll still have the bargaining chip of Chase Claypool, and they’ll inevitably be drafting another wide receiver, maybe even one in the first round, assuming no quarterback. He hasn’t earned top dollar just yet. Hell, the Ravens and Browns haven’t even signed their quarterbacks yet.