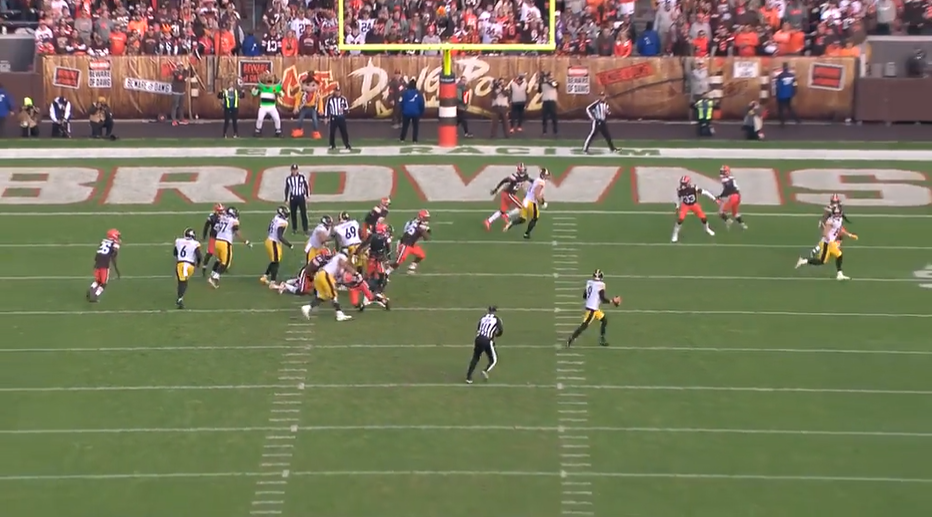 Sometimes there’s a moment in a game so inexplicable in how it turned out that it transcends the actual results of the game. In spite of the fact that the Pittsburgh Steelers actually defeated the Cleveland Browns on Sunday, so much of the talk is still about Pittsburgh’s decision to run a fake field goal late in the first half, which resulted in kicker Chris Boswell suffering a concussion.

Even the Browns don’t understand exactly why they ran the play, as special teams coordinator Mike Priefer talked about with the Cleveland media earlier today, noting that the Steelers’ motioning of their end man on the left side to the right side was a dead tell.

The play, of course, was ultimately well-defended by the Browns, with multiple defenders immediately signaling the rest of the unit to the fake. Boswell rolled to his right as much as he could, waiting for an opportunity to throw, before going out of bounds after releasing the ball, but not before taking a shot by Browns defensive lineman Jordan Elliott, which resulted in a concussion, and some Keystone Cops moments for the Steelers for the rest of the game whenever they were in need of a placekicker.

Priefer even went so far as to say that he shows his group the video of Boswell actually successfully completing a pass to left tackle Alejandro Villanueva a few years ago against the Denver Broncos on a fake field goal attempt, which resulted in a touchdown. These were different circumstances, however.

The best fake is one that doesn’t look like a fake before you snap the ball. Having Villanueva on that field goal unit three years ago was a tell, because that wasn’t his job. But it’s not always as easy to notice different personnel as it is to notice unnecessary motion, and it’s incredibly rare that you would ever use motion on an actual field goal attempt.

The Steelers’ end men on the field goal protection unit are their tight ends, Pat Freiermuth and Zach Gentry, so it’s not like motioning a defensive end—another position that commonly occupies that end role—to a strongside rush. Pittsburgh was just hoping to get the play off fast enough before the Browns could appropriately react. They didn’t.

Just look at the play in real time. You can see Browns linebacker Anthony Walker instantly reacting and getting his guys on the alert, with the leftside rushers poking up their heads and dropping. It’s not as though Cleveland was showing an unbalanced rush. They even motioned over safety Grant Delpit to cover Gentry after the shift. Frankly, even though it’s an awkward look, Pittsburgh would have stood a much better chance of executing this play if they just set both ends at one side to start the play.

“We were playing aggressively. The ball was on the left hash. We had a look that we liked. We just didn’t execute it very well”, Tomlin said of the decision to run the fake, after the game. “The ball wasn’t snapped in a timely manner, and it allowed them to take a picture of it. When that happens, you’re not going to be successful. Again, I take responsibility for it. I shouldn’t have called it unless we were ready to run it with detailed execution and it’s obvious that we weren’t. That’s on me”.

Unless you’re snapping the ball while the motion is still happening, I still have a hard time buying this fake. Special teams coordinators have plenty of time on their hands to watch the tape of their opponents’ units, and they know what looks odd. You don’t motion on field goals unless you’re trying to set up a fake, either on that play or in the future.