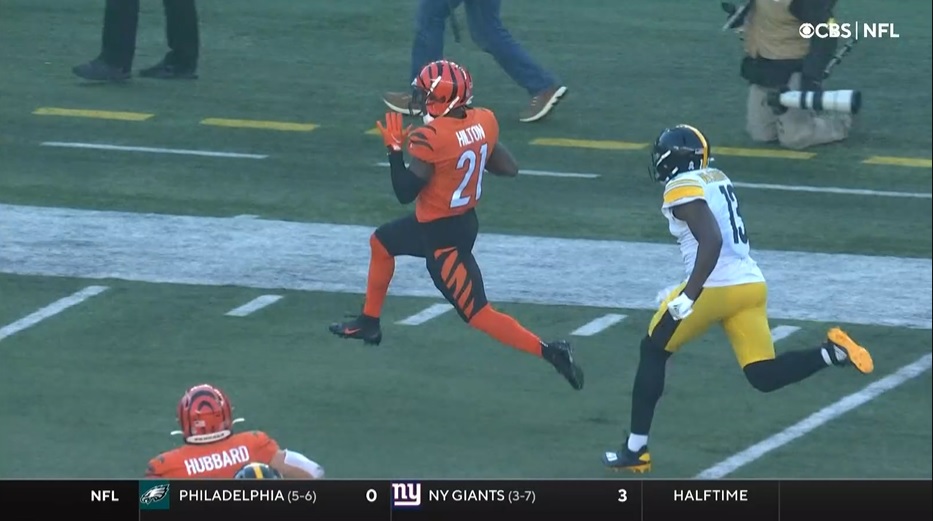 The Pittsburgh Steelers got embarrassed on Sunday afternoon at Paul Brown Stadium, losing 41-10 to the Cincinnati Bengals.

A 25-yard run by RB Joe Mixon put the Bengals in Steelers’ territory during their opening drive, and the Bengals got another first down on a defensive pass interference against CB Cam Sutton. On first-and-ten from the Pittsburgh 11, Mixon ran for a gain of three and on the next play QB Joe Burrow spun out of a sack and scrambled for an eight-yard touchdown. Evan McPherson knocked through the extra point and the Bengals took an early 7-0 lead.

CB Eli Apple picked off QB Ben Roethlisberger’s pass intended for WR Chase Claypool on the Steelers’ opening drive and took it back to the Steelers 6-yard line. On third-and-goal from the 1, Burrow was sacked by Chris Wormley. McPherson’s 31-yard field goal was good and the Bengals took a 10-0 lead.

Roethlisberger went back to Claypool again on the first play of the next drive for 41 yards. On third-and-nine from the Cincinnati 33, Roethlisberger and WR Diontae Johnson hooked up for an 11-yard gain and a first down. The Steelers couldn’t move the ball after that, and Boswell came out for a 40-yard field goal and hit it to move the score to 10-3 with 2:17 left in the first quarter.

The Bengals first play of the second quarter was a 12-yard completion to WR JaMarr Chase, and on the second play Burrow found WR Tee Higgins in the end zone for a 32-yard touchdown. McPherson’s extra point was good, and the Bengals took a 17-3 lead with 14:15 left in the first half.

The Steelers avoided a three-and-out with a third down reception by TE Pat Freiermuth. On second-and-six Roethlisberger couldn’t find Johnson deep down the right sideline, and on third down WR Anthony Miller made an impressive catch but was short of the sticks and P Pressley Harvin came out to punt. He pinned the Bengals inside the 20 at their 16.

The Steelers went three-and-out and gave the ball back to Cincinnati with 1:48 left in the first half. The Bengals drove into Steelers territory but S Minkah Fitzpatrick picked off Burrow, but Roethlisberger was intercepted by former Steeler Mike Hilton and he took it to the house for six. The Bengals went into the half up 31-3 after Pittsburgh couldn’t capitalize when they got the ball back. The 31 first half points allowed were the most by Pittsburgh since 1999.

The Steelers forced the first Bengals punt of the game with 8:41 to go in the third quarter. On first-and-ten from the Pittsburgh 45, Roethlisberger was sacked and fumbled and the Bengals took over in plus territory. Cincinnati moved it to the Pittsburgh 33 and McPherson hit a 51-yard field goal to put the Bengals up 34-3.

Against the Bengals’ backups, Roethlisberger hit Claypool for a 30-yard gain to get into Cincinnati territory, but a penalty against Claypool and an inability to move the ball forced the Steelers to punt. Harvin’s punt was downed at the Cincinnati 6.

The Bengals pulled most of their offensive starters, and the Steelers still couldn’t force a three-and-out, as RB Chris Evans ran for a first down on third-and-eight. The Steelers did force a stop when CB Ahkello Witherspoon broke up Allen’s pass on third down.

Pittsburgh got the ball back and moved into Cincinnati territory. A third down completion to Johnson moved to the Cincinnati 27. A few plays later, Freiermuth made a nice catch for a touchdown and the Bengals lead was cut to 31 at 41-10 after Boswell’s made extra point.

The Bengals went three-and-out, and the Steelers got the ball back with under two minutes left but didn’t score, and they walked out of Paul Brown Stadium with a 41-10 loss.