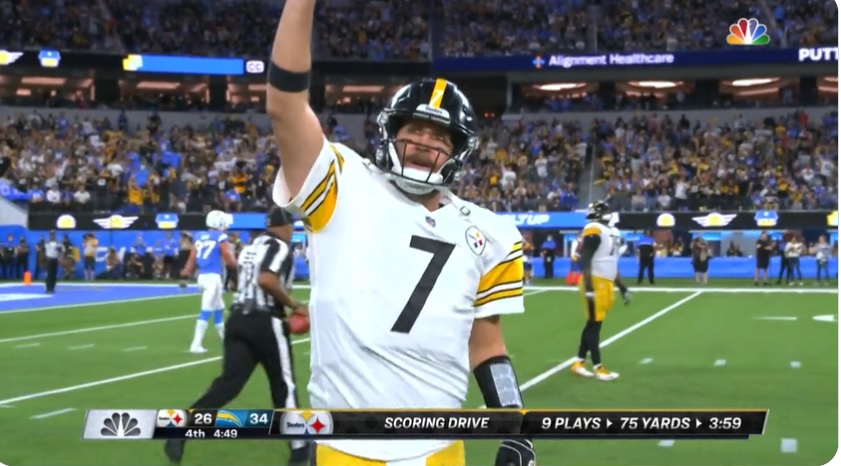 It didn’t look great early on Sunday night at Sofi Stadium for the Pittsburgh Steelers’ offense under the guidance Ben Roethlisberger fresh off the COVID-19 list, but in the classic sports cliche, it was a tale of two halves.

After an up and down first half that saw the Steelers score 10 points, leaving points on the board with an ugly turnover on downs at the Chargers’ 2 yard line, things started to click in the second half as the Steelers took advantage of some short fields thanks to turnovers, making a game of it.

Speaking with reporters after the game, Roethlisberger was a bit disappointed in the way the comeback attempted ended, stating he believed the Steelers had a real shot at pulling one out on the road.

“You know, it was two halves tonight. I think we had three series in the first half and kept the punter on the sideline, which is always good for an offense,” Roethlisberger said to reporters following the game, according to video via the Steelers’ official YouTube page. “We block a punt and then score; defense gets a turnover. Just a bizarre sequence of events, and obviously we’d like to finish the game off. We’d like to stay on the field, score a touchdown.

“They called a pass interference or a holding, and then they picked up the flag for uncatchable, which is referee’s discretion, I guess. We settled for three. That’s disappointing because offensively we’d like to use the clock and finish that game off.”

After the blocked punt and subsequent touchdown by rookie running back Najee Harris after a bizarre sequence of play calls from offensive coordinator Matt Canada, Cameron Heyward then batted a pass on the Chargers’ next drive, resulting in a Cameron Sutton interception, ultimately setting up a Roethlisberger touchdown to rookie tight end Pat Freiermuth, knotting the game at 34-34.

Things became crazier from there as Chargers’ rookie head coach Brandon Staley decided to go for it on fourth down on his own side of the field, which resulted in Steelers’ linebacker Joe Schobert shooting a gap and stopping the Chargers short, setting up the drive Roethlisberger referenced as disappointing.

On that second-to-last drive of the game, the Steelers’ offense gained just seven yards as Roethlisberger couldn’t connect with Chase Claypool on first down, completed a 7-yard pass to James Washington on second down, and then misfired deep to Johnson that originally had a flag thrown for pass interference or holding before being picked up, forcing the Steelers to call on Chris Boswell for a 45-yard field goal and a 37-34 lead.

Three plays later, the Chargers scored on a 51-yard touchdown from Justin Herbert to Mike Williams on a blown coverage, giving Los Angeles the lead that they’d never relinquish, causing Roethlisberger to lament the missed opportunity on the previous drive in which the Steelers could have rolled out a four-minute offense and ended the game with a win.