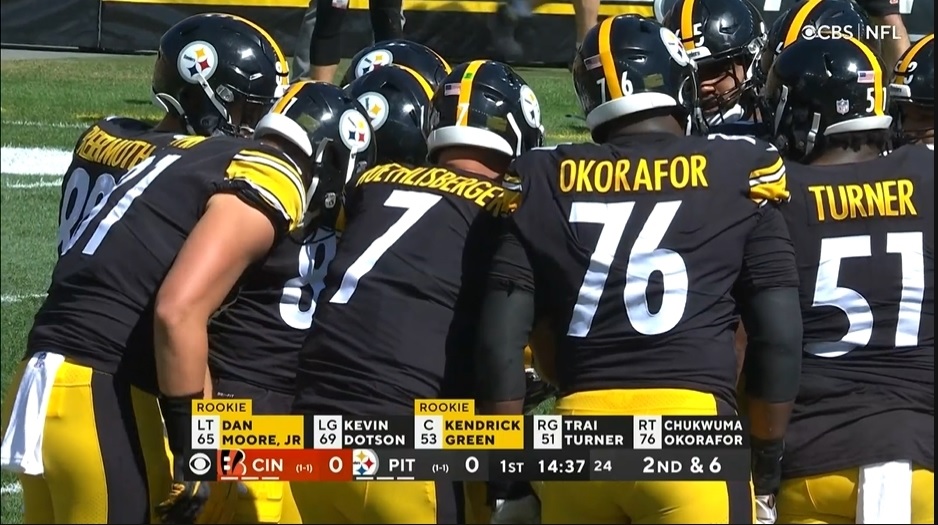 Over the last few weeks, we have seen the Pittsburgh Steelers’ offensive line start to gel together into a more cohesive unit. The starting five have consistently been putting in extra work after practice has concluded, and those extra reps appear to be paying dividends, as former Steelers Depot contributor Daniel Valente who now writes for The Score showed the difference in the running game with rookie RB Najee Harris from the first three weeks of the season to Weeks 4-6:

Those numbers show a drastic improvement in the ability to win on the ground for Pittsburgh, which the used to outrun the high-powered Cleveland Browns rushing attack last Sunday to the tune of 91 rushing yards on 26 carries for Najee Harris (3.5 YPC) along with a rushing score. While the yards per carry average doesn’t scream efficient play, Harris enjoyed a successful run rate near 50% before the final drive, when Harris was run up the middle on consecutive plays to eat up clock. Dave Bryan and Alex Kozora highlighted the surge up front by the OL on the Terrible Podcast this past week, out-playing the best rushing attack in the league in Cleveland to help Pittsburgh seal the win.

While rookie OT Dan Moore Jr. struggled in pass protection against EDGE Myles Garrett, he represented himself well in the ground game, constantly driving defenders back and displaying the physical demeanor OL Coach Adrian Klemm has been wanting to see all season from this unit. RG Trai Tuner likely had his best game of the year, and Kendrick Green held his own well in this matchup. Kevin Dotson and Chukwuma Okorafor had their ups and downs, but had respectable showings in their own right.

Along with improvements in the run game, the pass protection appears to be on the upswing for Pittsburgh, as well. According to Pro Football Focus, Pittsburgh sits around third in the league when it comes to pressure percentage allowed per drop-back in the league, 18.5% heading into the Week 8 matchup against Cleveland with Ben Roethlisberger being the lowest-graded passer under pressure after the game (27.8) according to PFF’s metrics. Part of this is due to Ben’s quick release times near the LOS, but also the offensive line deserves some credit for improvement in pass protection compared to their performance at the beginning of the season.

So, given the improvements along the offensive line, doesn’t this mean that Pittsburgh will bypass the option of selecting an OL in the first round of the 2022 NFL Draft? Prior to the season starting and after the first three games of the year, it was a foregone conclusion that Pittsburgh would either be taking a QB or an OL with their first selection. However, given the improvement in play of rookies Dan Moore Jr. and Kendrick Green along with more consistency from Kevin Dotson, it appears as if Pittsburgh has a solid young core up front that you can only hope will continue to improve with more time playing together.

OT Zach Banner has yet to return to the starting lineup, but he is signed through 2022, providing the Steelers with a 1-for-1 replacement of Okorafor should they choose not to re-sign him after the season. OT Joe Haeg is also signed for 2022 and has held his own for Okorafor when he missed time at RT against Green Bay, and can be the swing tackle behind Moore and Banner. Trai Turner is also a FA after the season and likely may not be brought back in 2022, but the question of the value of drafting an OG in the first round compared to other valuable positions will be a debate Pittsburgh will have to consider.

Names like Kenyon Green from Texas A&M and even Ikem Ekwonu from N.C. State could garner Day 1 consideration at guard, and an option that has been brought up before is the possibility of drafting C Tyler Linderbaum out of Iowa and moving Kendrick Green to RG. While Pittsburgh has invested significant draft capital on the interior in the past (Maurkice Pouncey & David DeCastro), those players represented the caliber and pedigree worthy of such a selection whereas there may comparable players to be had on Day 2 of the draft at center and guard.

I can say that there are several OTs in this draft class that I would approve of Pittsburgh selecting in the first round, including Charles Cross from Mississippi State, Trevor Penning from UNI, Evan Neal from Alabama, and possibly Rasheed Walker of Penn State. However, Dave Bryan has referenced several times on the podcast that Pittsburgh traditionally doesn’t spend first-round draft capital at OT, and given that Pittsburgh has possibly their top three tackles for 2022 under contract, it would seem likely that they may hold off on tackle until Day 2 or later unless Moore falls flat on his face down the stretch, or if they don’t trust Banner to stay healthy.

I’m not saying that Pittsburgh shouldn’t draft an OL in the first round in 2022. Rather, based on the trends Pittsburgh has had in the past when investing in the OL, as well as their strategy this past offseason retooling the unit, they may see several members locked in as starters going forward, and will look to address other needs at DL, CB, S, or even QB unless some unbelievable talent falls to their pick that is too good to pass up. There is a lot of season left to be played, and a lot can change from now until April. But as we stand here today, I do think the likelihood of Pittsburgh smashing OL on Day 1 of the draft is less certain.

What do you think of the current state of Pittsburgh’s OL, and what the outlook of the unit is in 2022? Do you think that selecting an OL in the first round of the 2022 NFL Draft should be the most likely scenario, or do you think that the improved play of the current unit as well as the other positional needs will push Pittsburgh to look at another position of need/value with their first selection? Please leave your thoughts in the comments section below and thanks for reading!