Week 10 of the NFL season is in the books, and I wanted to provide some data in anticipation to the playoffs and predictive success. With that in mind, here’s a visual of the ANY/A data point that will be used for the offenses (OANY/A) and defenses (DANY/A) from Pro Football Reference: 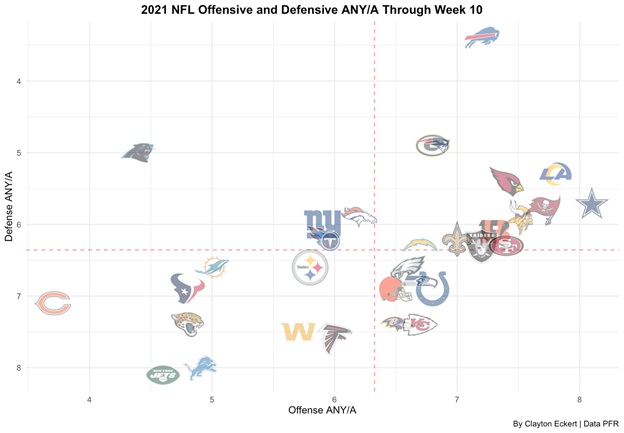 The teams on the top right are the current front runners to win the Super Bowl, and we can see from the graph where other teams sit currently. I also found it interesting to compare the results to the week eight article to see how team trends are moving. As previously mentioned, no team has won the Super Bowl since 2000 with a negative ANY/A differential and a DANY/A number higher than 6.1, and I will be intently monitoring and providing the data as the rest of the season unfolds.

Here are two table views of the teams: first, teams who meet the above criteria in green, and the second a summative table of only these teams.

The first table is an interesting view, the teams fully highlighted in green are the current teams that meet the Super Bowl criteria as we sit here today with historical data to back it up. The teams that have met the criteria in both week eight and ten are the Bills, Rams, Cardinals, Bucs, Packers, Patriots, Bengals, and Broncos. The teams that joined the list this week are the Cowboys and Vikings, and falling off the list this week are the Raiders, Saints, and Chargers. The 49ers are also important to note as they only missed the DANY/A by 0.2, and the Giants and Panthers met the DANY/A, the later in week eight as well. This highlights the teams that have solid Super Bowl chances and which teams are teetering the line as of today.

The Steelers currently have a differential of -0.8 and a 6.6 DANY/A number, a slight improvement compared to a -0.9 differential and 6.9 DANY/A number from week eight. Here’s to hoping the Pittsburgh defense can step up and improve on their number for the remainder of the season, since that is seemingly their only hope to make a future list.

Here’s the view with teams that currently meet the criteria: 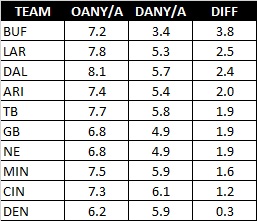 It will be very interesting to continue monitoring this moving forward and seeing the data solidify as we continue through the season and shed light on this year’s likely playoff and Super Bowl participants.