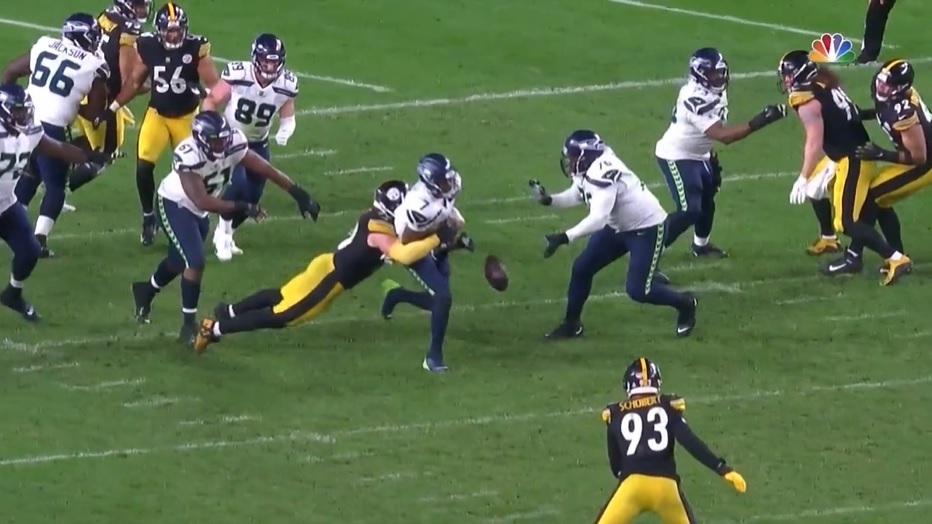 The Pittsburgh Steelers narrowly escaped the upset loss at home against the Seattle Seahawks Sunday night, winning the game in OT 23-20. While the victory was a team effort that had many contribute to the end result, no one player shined brighter in primetime than LB T.J. Watt. Watt’s efforts throughout the night kept Pittsburgh in a game that frankly it looked like was slipping through their fingers in the second half, making impact play after impact play on the defensive side of the football to end drives and get the ball back to the offense.

To start the game, T.J. Watt seemed to have morphed into “T.J. Swat”, knocking down three separate passes in the air This first PBU comes on a rush on a pass rush in the first quarter with Watt going against #72 Brandon Shell where Watt uses the drip/rip move to get around the corner into the face of QB #7 Geno Smith. Smith releases the football as Shell attempts to escort Watt around the arc, but Watt manages to reach out and tip Smith’s hand as he releases the ball, causing the pass to fall incomplete.

Later in the half, we see Watt line up in the box as an off-ball backer crowding the LOS, allowing him to pick a gap and rush the QB from the interior. He engages LG #68 Damien Lewis and proceeds to rip off the block to the right as #97 Cam Heyward crashes in and takes on the double team, looping into the passing lane and leaps up to knock down Smith’s pass attempt down to the ground, nearly coming down with the INT.

This pass deflection comes later in the second half where Watt comes off free with #73 Jamarco Jones pulling from left to right in attempt to pick Watt up. Watt gets enough ground on the snap of the football to evade the block by Jones, noticing Smith releasing the football with #35 Arthur Maulet coming in free on the nickel blitz and again gets his hands on the football in the air, forcing another incomplete pass.

Watt made his presence felt in the run game as well, recording three TFLs on the night. On this first-and-goal play inside the three-yard-line, we see Watt at the LDE spot come off the ball again expecting the pull by Lewis from the LG spot. Watt does a great job attacking the block while staying square to the ballcarrier, bouncing off the block to the inside and managing to wrap up #41 Alex Collins at the line for no gain.

Watt has become known for his motor that is always running hot regardless of how many snaps he is asked to play. We see an example of that motor and effort here on this run to the left side with Watt providing great backside pursuit to the ball, tracking Collins down from behind and wrapping him up in the backfield as Heyward comes in to clean up the play for a loss of yards on first down.

Another TFL Watt makes here on this draw play where Watt goes inside across the OT’s face into the face of Smith but is able to locate Collins who gets stalled due to the efforts of rookie DL Isaiahh Loudermilk who holds his own against #66 Gabe Jackson. Watt redirects to Collins and brings him down at the line to force third-and-long.

Watt took the role of a closing pitcher in overtime, notching two sacks in the extra period including a strip sack fumble that ended up sealing the win for Pittsburgh. On the first sack, we watch Watt get a great get off on the snap of the football, getting Shell to immediately turn his shoulders and commit to his punch. Watt turns the corner on Shell with relative ease and rips through the block attempt right into the lap of Geno Smith, swarming him and wrapping him up in the backfield for the big sack on third down.

Finally, the play of the night that gave Chris Boswell the chip shot field goal attempt to win the game. Notice how Seattle commits two blockers to Watt as he starts square to the LOS in his stance to fight off the blocks. He engages both Shell and #81 Gerald Everett as Geno Smith fakes the play action. Watt rips off of the block by Shell as he notices Smith scrambling out of the pocket, running him down and swings at the ball as he secures the tackle, successfully knocking the ball out which #55 Devin Bush recovers.

T.J. Watt finished the night with seven tackles (six solo), three TFL, three PDUs, two sacks, two QB Hits, and one FF that gave Pittsburgh the victory. It was a performance reminiscent of the famous James Harrison Monday Night Game in 2007 has he dominated in early every way possible. He proved to all of Steelers Nation as well as all of those tuning in across the country that he was worth the four-year extension this offseason making him the highest-paid defensive player in NFL history.

Watt has made a consistent impact for years in Pittsburgh, but none may be more influential than this one in terms of the statistics as well as how much this win means to Pittsburgh going into the bye week sitting at 3-3. Many would say that Watt has been snubbed of the Defensive Player of the Year Award the last two seasons despite being recognized as one of the most influential defenders in the game today. While Aaron Donald, Myles Garrett, and Trevon Diggs are off to great starts as well to earn recognition for the award this season, Sunday Night’s performance in primetime should go a long way in helping Watt’s case of earning the award he so rightly deserves this time around.

What are your thoughts on T.J. Watt’s performance Sunday night against the Seattle Seahawks? Do you think he made a statement to the rest of the league? Is he deserving of winning the DPOY award this season, and can he lead this defense to play at a level that can carry Pittsburgh to the playoffs in 2021? Please leave your thoughts in the comments section below and thanks again for reading!