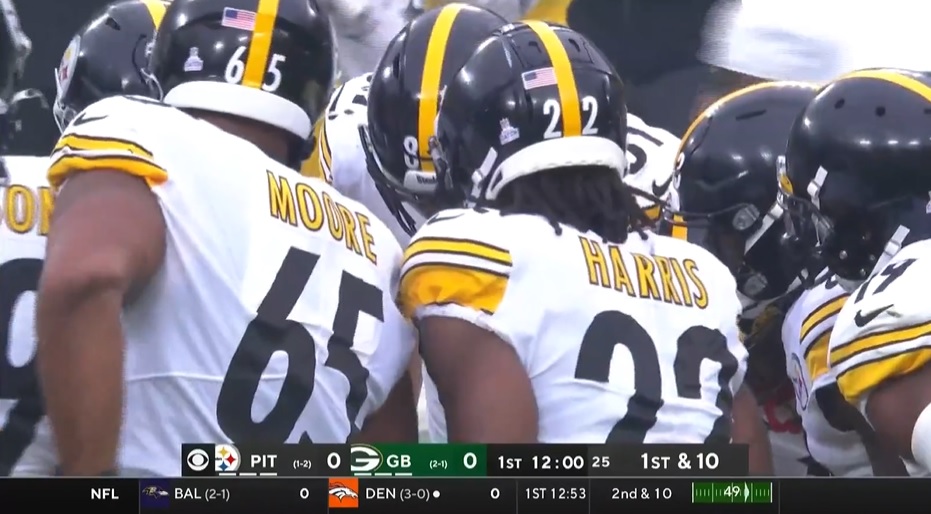 It wasn’t one giant step for mankind. If the Pittsburgh Steelers’ O-line were taking a trip to space, yesterday’s performance was putting on their helmet and sitting in the rocket’s chair, not walking on the moon. But their performance in the run game was a step in the right direction, the first signs of life this run game has shown a month into the season. For Trai Turner, that’s something the offensive line can hang its hat on.

Turner spoke with reporters Monday morning about the team’s rushing output in yesterday’s loss to the Green Bay Packers.

“It’s a step,” he said via Steelers.com. “But I think we need to make more strides really quick.”

Turner went on to later say the group “could take some positives from this game.” And he’s right. Najee Harris rushed for a season high 62 yards on the ground yesterday, averaging a respectable 4.1 yards per carry and notching his first rushing touchdown. It’s far from great but easily the best performance of the year. Here’s his rushing output across the first four games.

The Steelers’ first down offense was more successful as a result, doing a better job of staying on schedule and staying out of third and forever, though the offense continues to struggle on possession downs (4 of 13 Sunday). Over the first three games of the year, Pittsburgh averaged 3.6 yards on first down, next-to-last in the league. Yesterday, that number bumped up to 4.4 against the Packers, still a poor number but showing some signs of improvement.

Turner, like any offensive linemen, says a commitment to an effective run game remains key.

“I feel like we love to run the ball, love to set the tone, love to set our pads and have a demeanor about the line. Sometimes you get away from things with game plans and certain situations in the game. But we want to keep getting better in that aspect of things and getting Najee going in general.”

Getting the first rushing score by a running back was also a step in that direction.

“I think that was a building block for us and I was happy to get Najee in the end zone for his first touchdown.”

Pittsburgh trailing for large portions of their three losses has made it all the more difficult to run the ball, although it’s not like they’re having a lot of success when playing with the lead. The Steelers are dead last in rushing attempts with 66, even behind the Chargers and Raiders, who don’t play their fourth game until tonight. It’s a chicken-or-egg issue. If the Steelers don’t play with the lead, they won’t run the ball as effectively. But if they can’t run the ball effectively, and overall in 2021, they sure as heck haven’t, it’ll be harder to get that fourth quarter lead.

The road won’t get much easier in Week 5 against the Broncos. Their 3.5 yards per carry against average is tied for fifth best in the league and they haven’t allowed a run longer than 13 yards this season, the best mark in football.