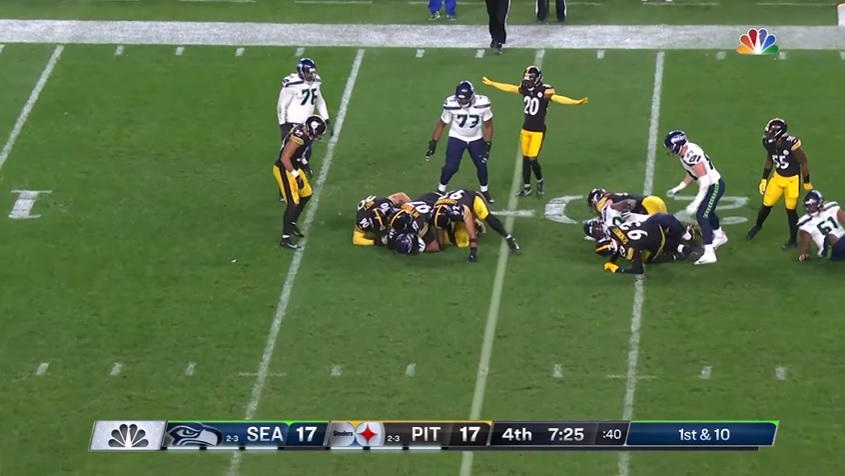 1. Watt Did You Think Was Going To Happen – Me? I had no idea but big time players make big time plays. The biggest was obviously the forced fumble to set up the game winning field goal but that wasn’t it. There was the sack on the previous drive. There was two deflected passes. There was a hit of the quarterbacks arm early in the game. Game changers are hard to find and that is why they get the big money. This dude is earning it.

2. Help Wanted. Inquire Within – Losing JuJu Smith-Schuster for the season is a huge loss not only for this offense by for Ben Roethlisberger specifically. JuJu was his security blanket. Diontae Johnson did his part and made some plays but where are the other receivers. Chase Claypool has just two receptions on seven targets and on two of those he and the QB were not on the same page. James Washington was MIA. Ray-Ray McCloud had more yards than Claypool. Somebody needs to step up quickly and become a consistent contributor.

3. I See a Hand Raised in the Back – “I volunteer to step up”. Thank you to Pat Freiermuth for doing your part. He came in with 11 receptions for 100 yards. In this game alone he had seven for 58 with some first down conversions. I complained about his usage a couple weeks ago and finally they gave him a chance. He caught every pass thrown his way. With JuJu out, he is what this offense needs. If they use him as they should he’ll finish top three on the team in receptions.

4. Tre Fricken Norwood – Getting contributions from seventh-round picks is basically a bonus, right? I mean in reality these guys are a long shot to make the team let alone be an important part of the team. He has found his role with the team and he has done it well. He has played well in coverage and he made two big tackles and a pass break up all for important stops on third down. He’s doing all that is asked of him and to this point not making a lot of mistakes. Gem of a find by Kevin Colbert.

5. Keeping His Head Up – After the role Eric Ebron had last year, you could understand if he hung his head this year. His role has been diminished greatly but there have been no complaints that I know of. He had two big plays. The first was a catch in traffic on third down that kept the drive going on the Steelers’ first touchdown. Then he was rewarded later with a run at the goal line on a jet sweep for a rushing touchdown. Every team needs team players and he seems to have accepted this new role.

6. Confidence is Rising – The last two defenses the Steelers have faced are not top-notch defenses, and that may have been a good thing for this offense in a sense. The production in the run game was not spectacular versus Seattle but it has shown improvement over the last three games and it seems, at least to me, that Najee Harris is beginning to trust them more. He seems to be much more confident in the line being able to do their job and that allows him to run more freely not trying to dodge guys in the backfield every play. The cohesiveness is building slowly and it must. This team needs the running game to be good to have a chance to win every week.

7. Is There Anyone to Fear? – You’re an opposing running back. You take the handoff and you get through the defensive line. If you could just avoid a big hit from…oh wait. Who of the Steelers linebackers, safeties and cornerbacks do opposing players not want to get hit by? There is a lack of physicality on the second and third levels. There are no big hits. There is poor tackling. There are extra yards to be had everywhere. If there is no one to smack runners in the mouth they had better become better technical tacklers or they’ll get run over every week.

8. Sounds of Silence Just Got Higher – There were a lot of expectations for Alex Highsmith this season and to this point he has been quiet. Just 14 tackles in four games with no sacks. In seemed inevitable and he finally broke through. Seven tackles, 1.5 sacks, two tackles for loss, and four quarterback hits. He is loaded with talent and with guys like Stephon Tuitt and Tyson Alualu out he may be drawing more attention from the offensive line than expected at the beginning of the year. He has the skills and is just going to better with time.

9. Bugging Out – I need to see the tape again, but it looked like Isaiah Buggs was playing well early on. He got penetration on the first drive and made a tackle for a loss and looked to be handling his role well. In the second half when the Seattle running game was torching the defense, he wasn’t in there. The Steelers were in nickel to counter Seattle playing 11 personnel but against Geno Smith maybe you give the base defense a chance to play a bit more. At least until Smith starts to complete a bunch of passes. Watching them run it over the right side play after play was nauseating.

10. He Looks Forward to This Game – Speaking of the Seattle running game, maybe it wasn’t the Steelers’ ineptitude and it was just Alex Collins. In four games before this one he had 47 carries for 279 yards and two touchdowns against the Steelers. That is 5.93 yards per carry. In this game he added another 101 yards and a touchdown at 5.1 yards per clip. His career average coming in was 4.2 which is solid, so he must really like playing Pittsburgh. Stats are great, but the funny thing is his team is 1-4 in games against Pittsburgh.