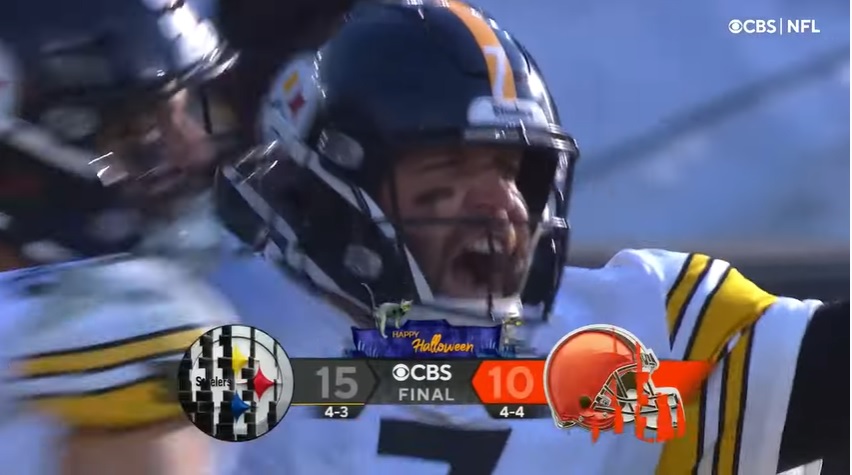 1. Don’t Breathe (2016) – We know this team. The wins are rarely blowouts and games like this lead to lots of tension, increased heartrates, pacing around the man-caves and she-sheds and holding your breath during the fourth quarter. This is a big win, no doubt about it. I questioned four weeks ago where the wins were going to come from and they’ve stacked three in a row. This team battles and it’s usually not pretty but a win against Cleveland sure is. This division will be a battle to the end.

2. The Forever Purge (2021) – Let’s brainstorm here. How do we purge the poor officiating in the NFL? This is a fast moving game with a lot of big bodies but the penalties that are being called were terrible. Holding on a nose guard that did not happen. Throwing a flag on a Cleveland sack and then picking it up. The same holding call that was called on Kevin Dotson was not called on the Browns offensive lineman holding Chris Wormley on a fourth quarter twelve yard run. There’s too much guessing and no consistency. Reviewing every call is not the answer but there needs to be some accountability.

3. Ready Or Not (2019) – Another topic I posted here recently was the usage of Pat Freiermuth. The loss of JuJu Smith-Schuster has put Freiermuth clearly in the crosshairs of Ben Roethlisberger and that is a good thing. He was targeted four times on the first drive and later made the catch of the game. A contested, toe tapping reception for the go ahead score. Fourteen targets the last two games and that trend should continue. Tight ends sometimes are slow to develop coming into the NFL but Freiermuth is ready.

4. Hellraiser (1987) – This could be an every week comment here but I am continually impressed by Cam Heyward. There was a two play series to end the second drive that will likely be forgotten but he made an impact on both short yardage plays. The first was a direct snap to the running back on 3rd and 2 where he helped string out the play and make the tackle for a one yard gain. Followed that up on fourth down pushing his man in to the backfield to disrupt the play forcing it outside until help came. He is so consistent and a nightmare for all offensive linemen.

5. Scream (1996) – Let’s talk about the holding call on James Washington. It was a one on one block on I believe a jet sweep by Ray-Ray McCloud. All he has to do his keep his hands inside, move his feet and maintain contact and that’s a seventeen yard gain to the one. Easy enough, right? My question is where was he looking? On the replay it looked like his head was turned inside not looking at his man. Don’t worry about what is happening behind you or elsewhere on the field. Focus on what your job is and what is in front of you.

6. Scream 2 (1997) – Speaking of McCloud. You Sir need to do a better job of not letting punts hit the ground. You’ve got speed, get to the spot and make the fair catch. Letting the ball fall in multiple times is just asking for something bad to happen. It could bounce off of you or a teammate and this team can’t let little mistakes like that derail what they’re trying to do. Just catch the ball and make it easier for everyone.

7. Duel (1971) – The Browns came into the game with one of the better run defenses in the league. The game was going to be a test for this offensive line and the stepped up to the challenge. It was evident early and my mantra during the game was “keep pounding the middle”. The interior of the offensive line was able to move defenders this week and it made a huge difference for the offensive flow. The run game is going to have to be a strong point in the offense so this is a good building block.

8. Let Me In (2010) – I wonder what the discussion was like when they decided to leave Dan Moore on an island most of the game against Myles Garrett. You can tell it was in Roethlisberger’s head early in the game. He had some happy feet knowing he didn’t have a lot of time. The leagues sack leader added to his tally and had a couple QB hits. They could have and should have chipped more. I would have chipped more to give Moore and Ben some help. Moore has played continued to improve and has played well but it was an interesting decision.

9. The Invisible Man (1933) – The trade for Joe Schobert was one that needed to be done. He was brought in to solidify the linebacker group and he hasn’t made a lot of big plays but he had a huge one with the forced fumble. It was a play the team needed and he came through. Have to give him some credit though. His play while not flashy has been effective. He has 45 tackles on the season and is allowing just over a 60% completion rate with four pass breakups. He has quietly played pretty well.

10. Psycho (1960) – So we have to talk about the fake field goal. Mike Tomlin wanted to be aggressive and I can understand that idea. I wonder what was seen in the film room to show a two man pass pattern might work against about seven guys in coverage. Chris Boswell has been nearly automatic the last three years. Take the points; hold the Browns and you get the ball to start the 3rd quarter. It was a baffling decision to me. I hope the concussion is a short term one.