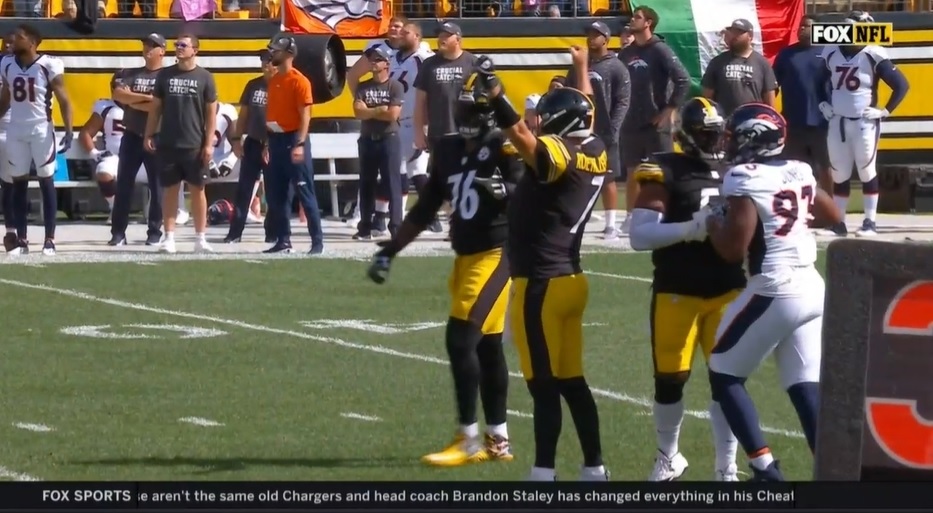 1. Sustain and Gain – We saw some life come to the running game last week and the capitalized on it today. It starts up front and I felt the offensive line did a better job of sustaining their blocks.  This allowed Najee Harris to be patient while pressing forward and chose the gap that he felt was best.  The results showed that was successful with Harris averaging over five yards per carry and his first 100 yard rushing game nearly doubling he previous high (62 yards). It’s one game but hopefully they can build off this.

2. Less is More – With the success of the running game the Steelers obviously didn’t have to throw as much. With Juju Smith-Schuster out of the game Chase Claypool and Diontae Johnson picked up the slack. On just 8 total targets, they combined for seven receptions and 202 yards with each of them scoring once.  For those of you scoring at home that is 28.9 yards per catch.  Each had good yards after the catch numbers on inside breaking routes. Amazing what can happen in the middle of the field.

3. D number 3 was a Key – The Steelers effectiveness on third down on both sides of the ball was significant part of this game. The Steelers offense was 7 of 12 on third down and spread the ball around.  Early in the game Claypool, Pat Freiermuth and Eric Ebron all had conversions.  The defense did their part as well allowing Denver to convert just 2 of 12 third downs.  The defenses ability to get off the field led to them being fresher in the game and to sustain the late Bronco push.  Fourth down conversions for Denver (3 of 4) is a different story but we’ll focus on the good today.

4. Boz-amatic – Remember way back in 2018 when Chris Boswell was injured and hit on just 13 of 20 field goals? Well if you haven’t noticed he has been extremely consistent over the past 2+ years.  In that time period he has made 56 of 60 field goals. That is 93.3% made.  Justin Tucker is widely considered the best kicker in the game and over that same time period, he has made 64 of 69 (92.8).  We are very lucky have a kicker of such consistency.

5. Less Room for Error – Today was a good day getting a win but with the inconsistencies that this team has had on both side of the ball they really can’t afford to shoot themselves in the foot with mental errors. There were a couple drives that were derailed by penalties they need to get that under control. There were 8 accepted penalties for 59 yards this week. On the season it is 33 penalties for 241 yards. They need to cut down those numbers to be consistently competitive.

6. Thank Canada – I complained here last week about Matt Canada, his comments and his play calling so it only fair to give him his due credit this week. I thought he did a really good job this week.  There was commitment to the running game and that started early and was consistent.  He used RPO’s, which have been talked about at Steelers Depot, effectively. He mixed in play action. There were  angle/Texas routes by Harris which I have been clamoring for and there was more usage of the middle of the field. This was Canada’s best game and he may be finding his groove.

7. Remember but Forget – The life of defensive back is not easy. Covering world class athletes will lead to negative plays. It’s inevitable. Watching James Pierre get beat over the top for a fourth quarter touchdown was disheartening. We’ve already seen it happen earlier this season. He needs to remember to not let anyone behind him. However, being a cornerback he must also forget. He can’t let that play weigh on his mind and must forget it right away. To see him bounce back late to get a pass breakup on a similar route but then get the interception to seal that game showed the mental toughness he has.  That’s very good to see and also loved the embrace from veteran Joe Haden on the sideline.

8. Not on the Stat Sheet – Two plays that were impressive that won’t show up in the box score. The first is the Ben Roethlisberger pass that was deflected up in the air and nearly intercepted. Ray-Ray McCloud hustled in without hesitation and dove into the defensive lineman to prevent that interception.  That could have been a momentum changer.  The other was on an end around were Joe Schobert recognized it right away and stretched the play out. I don’t remember if he or someone else made the tackle but that play looked like it had potential for big gain.

9. My Man Cam – Stephon Tuitt, Tyson Alualu and Cam Heyward when healthy are an impressive trio. Only one man still stands and the effect he has on the game is noticed week after week. Heyward is the leader of the defense and holding the defensive line with rubber banks, glue and some old shoelaces. He had two more pass deflections this week.  That gives him 5 in 5 games and his career high is 7. The sacks aren’t coming but the pressure is there as well as the run defense.  I don’t know how many years he has left but man is he fun to watch.

10. You Can’t Take That Away – Elbows, hips, ribs, shoulder, pecs, ankles. You name it and Roethlisberger has hurt it.  He’s not the same player he was. The arm strength is diminished as has the accuracy but you can’t take away the toughness he has.  He has gotten battered this season taking many big hits but he has played every snap. You could see him today when an offensive lineman went to check on him he was wincing but said something to the effect of “I’m good. Let’s go.” You have to appreciate that he is giving everything he has in this season for one more ride.