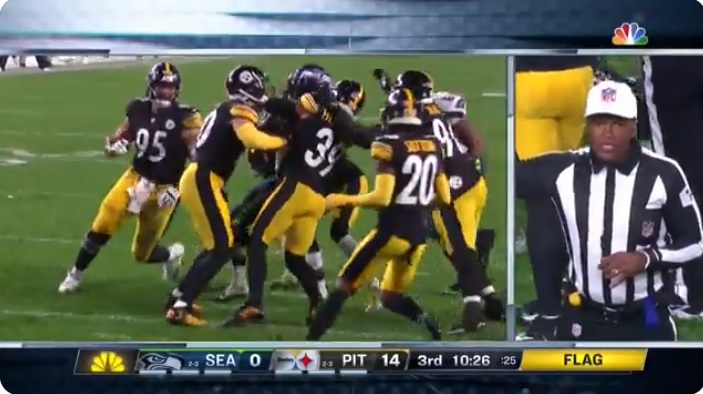 TJ Watt’s left/right jab combo is hurting his wallet this week. The NFL has fined Watt for his unnecessary roughness penalty in the second half of the Pittsburgh Steelers’ Week 6 win over the Seattle Seahawks. Watt was flagged for multiple punches towards Seahawks’ RB Alex Collins as he unsuccessfully attempted to knock the football out.

Take a look at the penalty and fine.

Watt was clearly attempting to punch the ball out, as all defenders are taught to do in a gang tackle, but missed with a couple of his punches and connected with Collins’ body instead. Watt is tied for the NFL lead with three forced fumbles this season. He forced one later on in the Seahawks’ game, knocking the ball out of Geno Smith’s hand that set up Chris Boswell’s overtime winner. Watt has 20 career fumbles, making him the third Steeler to do so in team history, joining Greg Lloyd and James Harrison.

The specific $10,815 fine are set by the league at the start of the year and go up a percentage each season. All fine money is donated by the NFL to charity.

It’s unclear if Mike Tomlin was fined for his post-game comments criticizing the officials for how they handled the end of regulation.