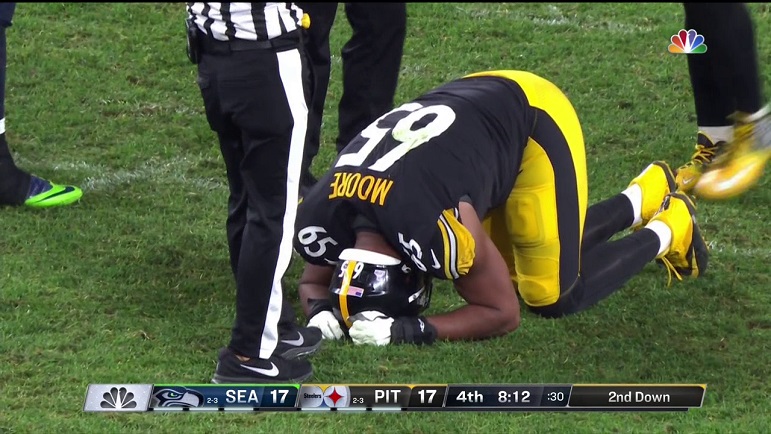 The Pittsburgh Steelers won a thrilling game against the Seattle Seahawks Sunday night in overtime and that victory now has the team at 3-3 as they enter their bye week. The team did, however, suffer at least one more injury Sunday night, and it was to a starting offensive lineman.

Steelers rookie tackle Dan Moore Jr. left the Sunday night game injured with 8:26 left in the fourth quarter. Moore, according to the team, suffered a hip injury and at the time he was deemed questionable to return. He was replaced at left tackle by veteran Joe Haeg, who played the rest of the game at that position.

Steelers head coach Mike Tomlin did not provide any sort of injury update during his postgame press conference, so it might be a while before we find out more about Moore’s hip injury and if it will ultimately cost him any games.

The Steelers activated tackle Zach Banner from the team’s Reserve/Injured list on Saturday, and he should be available to play moving forward from the team’s upcoming bye week. Banner, by the way, was inactive for the Sunday night game against the Seahawks.

Tomlin won’t likely talk to the media again until a week from Tuesday, and that figures to be the next time we get a full health update on the team.