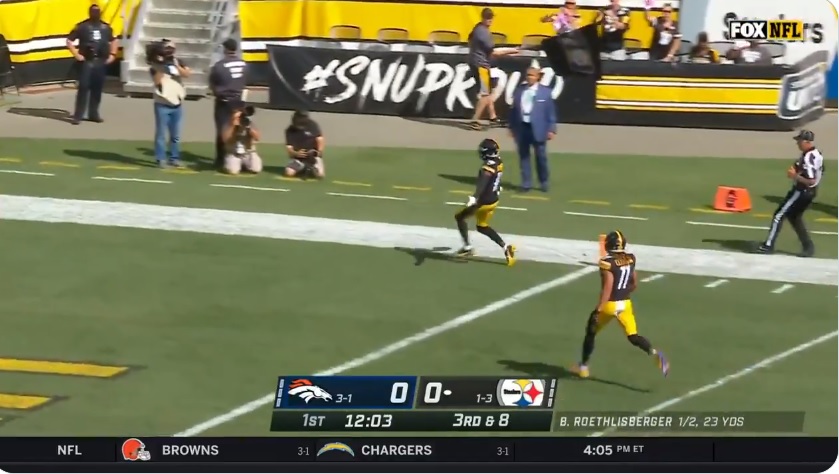 Winners and losers from the Pittsburgh Steelers 27-19 win against the Denver Broncos Sunday afternoon.

Offensive Line/Run Game – How about that? It took only five weeks but the Pittsburgh Steelers’ run game came alive. In easily its best performance of the season and maybe all of last season too, the Steelers were the more physical team from start to finish. The whole line did a great job of creating movement upfront, eliminating negative plays, and letting Harris hit the second level with momentum. A desperately needed performance with the team’s season on the line. Kudos to Harris for continuing to run hard and get yards after contact.

Diontae Johnson – New gameplan for first possessions. Throw deep to Diontae Johnson. A 50 yard score on 3rd down after a 45 yard score on 3rd down in Week 4 against Green Bay. A good throw from Roethlisberger but equally impressive track and catch by Johnson to make his way into the end zone. His second and only other catch of the game was a 22-yarder, a great read by Roethlisberger, to help set up a late Boswell field goal.

Cam Heyward – The most consistent Steelers week-in, week-out. He’s the team leader in pass deflections this season with five, two of them coming this afternoon against Denver. His run defense is always excellent and helped keep the duo of Melvin Gordon and Javonte Williams in check. A name you could put on this list every week. And we pretty much have.

Chase Claypool – Claypool missed an early opportunity with a deep shot that clanked off his face mask but he made up for it with other big plays. A 50+ yard catch and run catching the Broncos in a mismatch against LB Von Miller. Claypool followed that up with an 18 yard TD between three Broncos on 3rd and 10 late in the third quarter. He showed his football IQ to stay in bounds on a late 4th quarter grab, too. Claypool can’t/won’t win every single 50/50 ball and he is making enough plays when the ball’s thrown his way, even if he could be a little more consistent.

Chris Boswell – Some kicker love. Boswell a perfect 5/5 on kicks today (two field goals, three XPs) and that doesn’t even include a 51-yarder he nailed that was negated by a Broncos’ penalty, leading to Claypool’s touchdown. Don’t take reliable kickers for granted.

Minkah Fitzpatrick – Not a very good performance from Fitzpatrick, who missed an open field tackle on that long Williams run. His tackling in general in this game wasn’t great, aside from an early third down stop, and he missed some clean-up opportunities too throughout the game. To his credit, he improved in the second half and it was far from an awful performance. But also far from a good one.

Backup RBs – The offense went south when Najee Harris was out of the game. A dropped pass by Benny Snell, Kalen Ballage going backwards, you could feel the dropoff when the Steelers’ first round pick wasn’t playing. That’s the reason why Harris is playing 90% of the snaps this season.

Pass Rush – Again, not where it needs to be. For a team who played with the lead all game and forced Denver to throw for most of the second half, the pressure wasn’t there. Two sacks (and a third wiped out by an accepted penalty) but only a couple of QB hits the whole game against Teddy Bridgewater.

Special Teams Penalties – Hate to see them. Two of them in this one. One by Benny Snell on the opening kickoff and an especially egregious block in the back from Justin Layne on a Ray-Ray McCloud punt return. The Snell hold didn’t ultimately matter, Pittsburgh still scored, but they’re infractions that really back up an offense. Dumb stuff that can’t happen, especially by Layne.

Ahkello Witherspoon – Usually focus on the guys playing in the game, not the ones who aren’t. But Witherspoon can’t get a hat even when there are injuries in front of him. Witherspoon remained inactive even with Cam Sutton down due to a groin injury, losing out to Layne and the elevated Karl Joseph. Have to wonder what the team’s vision was when they traded a 5th to Seattle for Witherspoon. And what they’re seeing (or not seeing) now.