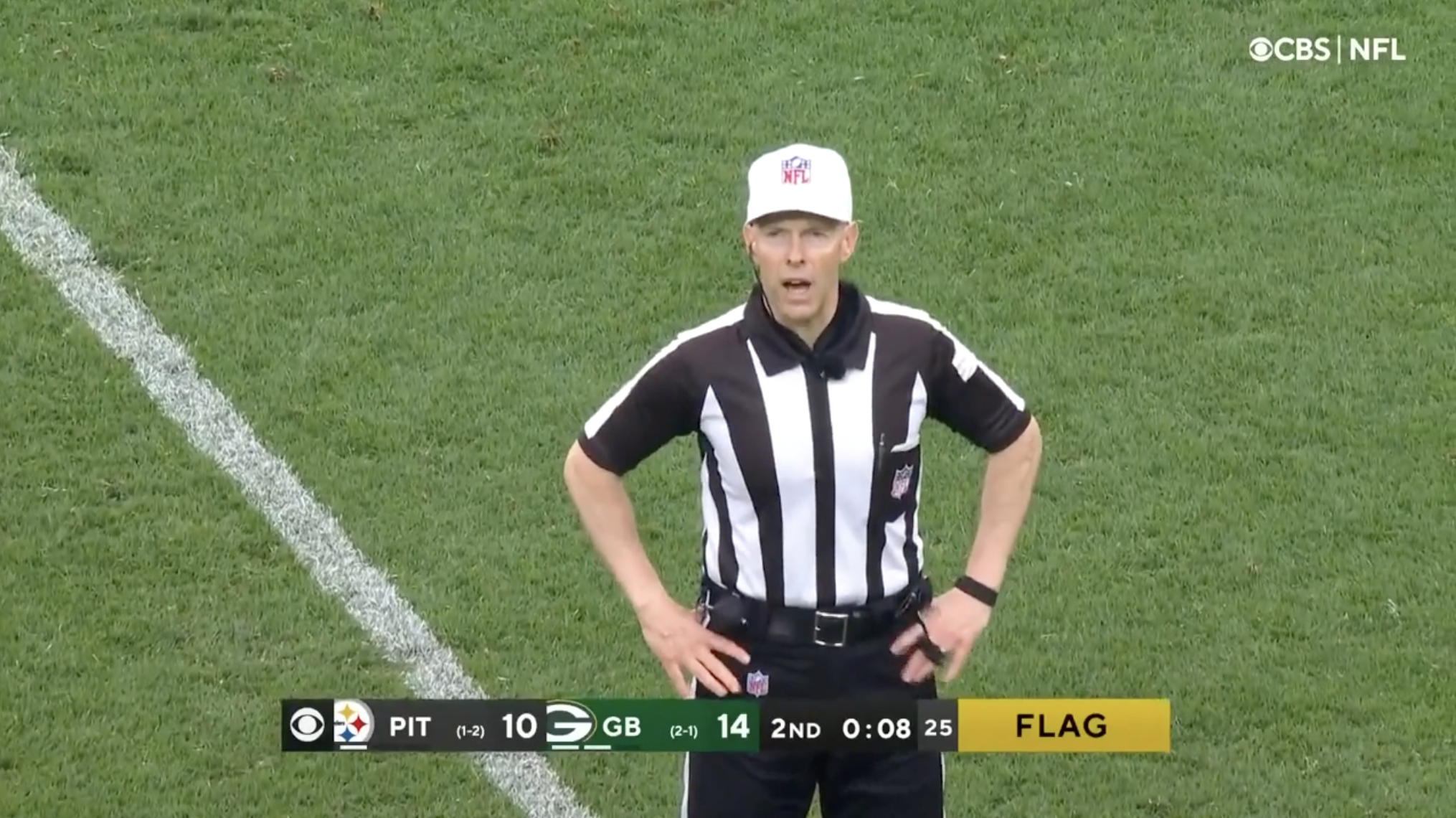 After the Green Bay Packers took advantage of a short field following a Ben Roethlisberger strip-sack, the Pittsburgh offense retook the field. Now down 14-7, fans began to tighten up knowing Aaron Rodgers and the ghost of Randall Cobb may be able to run away with the game if the offense doesn’t step up.

Some hope, as false as it may be, was present after seeing the Steelers’ offense score its first points in the first quarter of a game for the first time in ELEVEN tries.

Per @Alex_Kozora, the Steelers haven't scored an offensive point in the first quarter of their past 11 games. #Steelers

The next two Pittsburgh drives following the game’s opening touchdown were stalled in large part to Roethlisberger’s missed throws. But surely he’ll reel it in here, right?

Down seven, the Steelers offense had in mind exactly what they wanted to do to tie up the game. They’ve been setting it up for two drives now. We’ll take a deeper look at it. 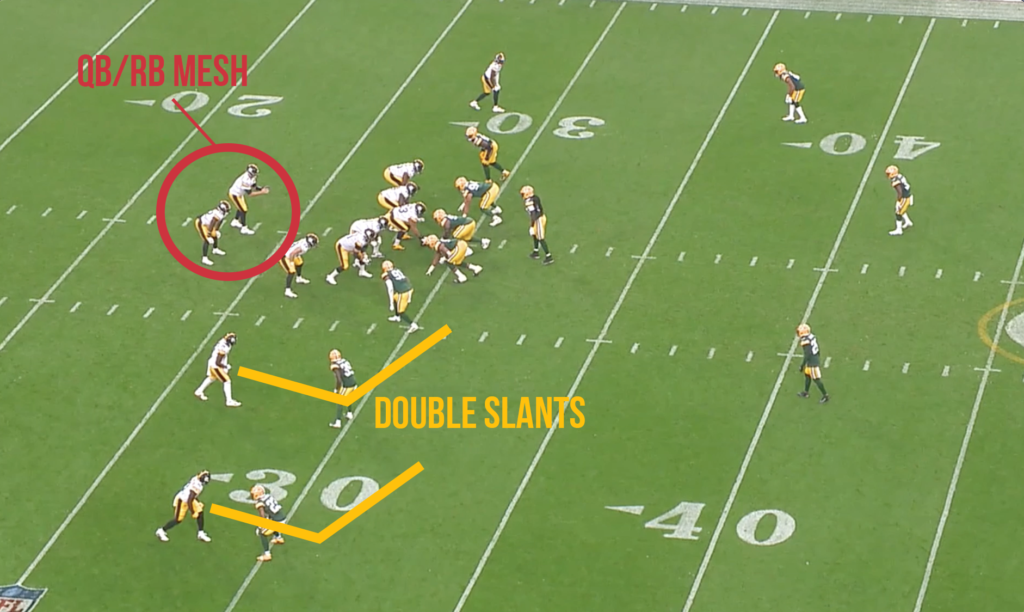 Three times in two drives the Steelers ran a look like this at the Packers. It’s sort of an RPO look. Although it doesn’t seem like Roethlisberger is truly reading anything at the line. In all three plays, there is a mesh with the running back and quarterback, where it’s either a hand-off or the QB will pull the ball to throw. In regard to the receivers, whichever side of the formation has two receivers will be running double slants.

These plays, in real-time, seem nothing more than some basic runs and quick passes. However, Steelers offensive coordinator Matt Canada has something planned for the slot corner.

The Packers slot corner has seen this concept develop three times now. He knows what’s coming. He’s got this.

He’s thinking, “If I see this set up again, I’m making a play. I’m going to be on SportsCenter. I’m going to use this in contract negotiations. This is it, Mama, time to buy you a new house.”

The Steelers come out in the same exact formation as the explainer screenshot I posted above.

Roethlisberger meshes with running back Najee Harris and pulls it.

JuJu Smith-Schuster begins the slant but sticks his foot in the ground for a slant-and-go, accompanied by a patented Big Ben pump-fake. The corner has absolutely no shot.

With the Packers defense in a Cover 1 robber look and the deep safety’s attention being averted to a vertical route from Diontae Johnson, the corner was left on an island with Smith-Schuster — and lost, BADLY.

No new house for Mom.

The Steelers’ offense perfectly set up and executed the play to tie the game. All except for one thing, the easiest part, hit the wide-open receiver.

I’m still on the edge here of who’s actually at fault. While I don’t think Roethlisberger needed to rocket this ball into Smith-Schuster, it’s tough to see from any angle, TV or All-22, if the ball was actually uncatchable, or Smith-Schuster simply missed it with his hands.

We’ll show you what side former Steelers linebacker, Vince Williams, leans toward.

No way 1 over throw. If the first one was caught the second one wouldn’t matter. True #1 Wideouts make that catch. https://t.co/gbUgNEFYIO

Ok so y’all on my head. So ask yourself this. “Would AB have caught it?”

After this, should-be touchdown play, the drive stalls out and thanks to a lucky “doink” the Steelers are able to still get three points out of the drive.

Now onto our true turning point of the game, which is a real shocker this week.

Before we jump into the obvious, I wanted to point out Joe Haden had a bead on this block from one of Green Bay’s earlier extra-point attempts.

You can bet he went over to Minkah Fitzpatrick and Danny Smith, after getting inches away from the block, and said, “Look, if we time this right, a block is a sure thing.”

Haden doesn’t even get a great jump on the snap for the XP attempt and still almost blocks it.

Looking closer at the kick that was actually blocked, it’s clear it was bad a call from the referees.

Here is the end zone view of the blocked field goal by @joehaden23 that is slowed and zoomed. Don't see how Joe Haden was flagged as being offsides here. #Steelers pic.twitter.com/xGwwl0I3lU

This rep, Haden and Minkah time the snap perfectly, easily blocking the kick. It’s, even more, a shame considering Haden gets called for the offsides when Fitzpatrick is the one that eventually makes the block, scoops, and scores.

However, you break this down, it sucks. Plain and simple.

As a fan, you were jumping through your ceiling, high-fiving your friends and family, thinking about going into halftime with the lead. All until you see that flicker of yellow at the bottom right of your TV screen.

The energy it sucked out of us as a fan, we can only imagine what it’s like as a player. Such an emotional play, wrongly taken away from you. And it showed on the field as the Packers went on to score the game’s next 13 points (counting the ensuing field goal on the retry).

If you’re counting at home, those two consecutive drives in the second quarter, just before halftime, resulted in a 14-point swing for the Packers.