Heading into overtime, Steelers fans were letting their TV’s have it as bad as head coach, Mike Tomlin, was giving it to the refs about their decision to review the DK Metcalf catch before regulation.

The anger may have been warranted after all.

As the teams met at midfield for the coin toss to decide who got the ball in overtime, Steelers fans minds were racing with all the reasons the team shouldn’t be in this situation:

And yet, with all of those factors, fans still had to fathom the fact this game was headed into overtime where their team would be one play away from a 2-4 record.

That feeling only worsened when the Seahawks won the toss and moved the ball to midfield following this 21-yard throw by backup QB Geno Smith on only the second play of overtime.

If you had any confidence left in this team to win, it may have been lost after seeing Ben Roethlisberger’s reaction to the play, as he knows it could be on the cusp of getting ugly in Pittsburgh.

Following a tackle for loss by Cam Heyward and a 10-yard check-down, we’re brought to 3rd & 4 from the Steelers’ 45-yard line.

The word “stressed” no longer fits what is going on in the heads of Steelers fans. It’s closer to a mental breakdown. Knowing that if this third down is converted, the Seahawks are not only, right on the edge of scoring range, but also in deep trouble of their offense not even touching the field in overtime.

The Steelers chose to bracket Seahawks’ deep-threat DK Metcalf with Terrell Edmunds and Joe Haden while having Minkah Fitzpatrick sink into a robber role across the middle of the field taking away the in-breaking route from Tyler Lockett.

This bracket coverage was writing on the wall for what would be the Seahawks’ last offensive play of the game, just minutes later.

Smith, was left with nowhere to throw until T.J. Watt, who was flying off the edge, was there to end any shot at converting the third down.

After a Steelers quick three-and-out and a BOOMING 56-yard punt by the rookie, Pressley Harvin III, the Seahawks take over at their own 16-yard line. That punt would be a hugely overlooked part of this upcoming turning point of the game.

Before we break down our turning point we must go back to Thursday, October 14th to fully know the preparation that helped lock up the game. During his weekly press conference, defensive coordinator, Keith Butler had some thoughts about the Seahawks passing game shown below by our very own, Dave Bryan:

Please make sure that my wife has this engraved on my pine box, please.

"When they're max protecting, they aren't going to throw dadgum five-yard routes, they're going to go down field on the thing." ~ Keith Butler#Steelers

Our entire staff was told by Dave, in our twitter group message, to I quote, “Learn it, know it, live it!” 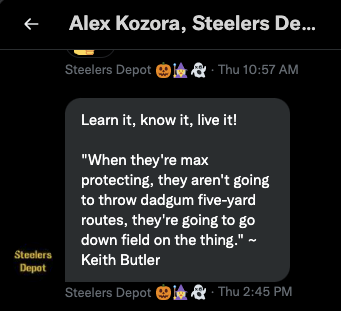 And in the biggest play of the game, we were able to do just that.

The Seahawks come out in 12 personnel (1 running back 2 tight ends) with a close split formation. The first thing I’m thinking as a defensive back when I see a big personnel and tight splits is yankee concept. When the play starts, it begins to look like a play-action yankee concept with Metcalf to work across the field, as does Lockett. However, just as you’d expect Lockett to start to break across the field, he breaks outside instead of inside.

The Steelers’ defense could not be more ready for what was thrown at them. The Seahawks go max protection off of the play-action fake and want to go deep, not any of those “dadgum five-yard routes”, just as Keith Butler predicted. The defense went back to the look from the last third down with the defense is bracketing both of the Seahawks’ deep threats on their two-man route concept.

With Metcalf bracketed and Sutton sinking underneath the out-route with Fitzpatrick over the top, there’s simply nowhere to go for Geno Smith. So he does the right thing, tries to use his legs up the middle. Everyone is blocked up nicely, right? 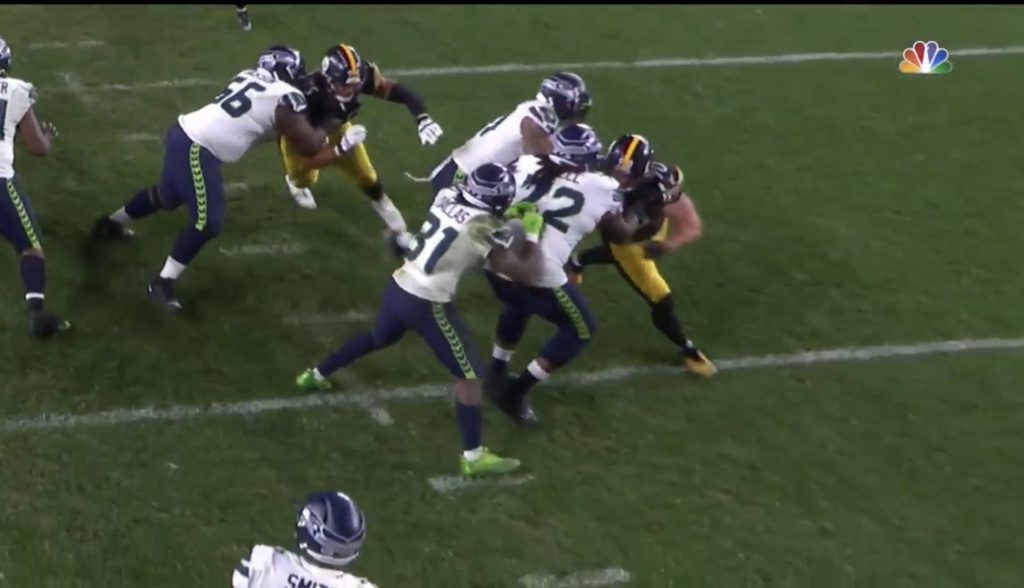 Watt is able to rip free and use his signature punch to get the ball loose and set up the Steelers in scoring position.

After the stands stopped bouncing and the towels stopped twirling from their $112-million man setting up the Steelers in prime-winning position, Chris Boswell was able to kick the field goal that was able to bring the Steelers back to .500 going into their bye week.

The Steelers escape. There are no style points in the NFL, remember?

We’re on to Cleveland.