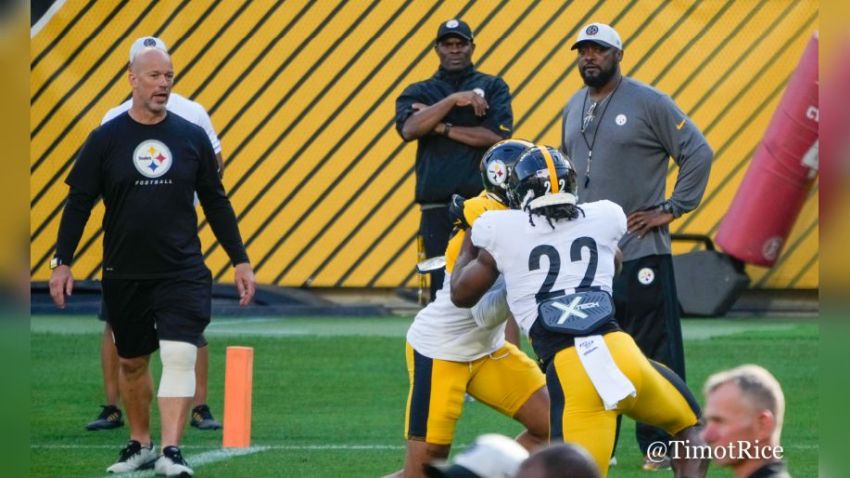 The mark of a true three-down running back in today’s game is his ability to pass protect.

Sure, running the football well and being a receiving threat out of the backfield will go a long way towards seeing the field, but if you can’t pass protect, you aren’t long for the game.

Fortunately for Pittsburgh Steelers’ rookie running back Najee Harris, he’s well-versed in the task of pass protecting, having done it a ton at the University of Alabama, and early on in Pittsburgh. In fact, our very own Alex Kozora had this to say about Harris in his pre-draft profile for Steelers Depot: “Willing pass protector, frame helps absorb contact, able to square up and shows effort.”

Kozora also wrote in the negatives for Harris that he can be a bit, “Inconsistent in pass pro, needs to play with better base, will lose reps.”

So far, that’s exactly how it’s played out as Harris has lost some reps, given up some pressure and a sack on Roethlisberger. Overall though, he’s shown good effort and strength and won’t be pushed backwards with initial contact when in pass protection.

With a showdown against the Denver Broncos and their fearsome defense looming Sunday, Harris was asked about his ability to pass protect during his media availability Friday, according to audio provided by the team. Harris stated to reporters that he’s very comfortable doing it, thanks to his time at Alabama.

“I think Alabama, I’m not trying to go back to college, but Alabama, that was something that [Nick] Saban always emphasizes a lot about how important it is in the NFL to have a running back, not only who could do all of this stuff and pass block and catching or catching and running, but also how important it is to pass block as kind of almost more important than the other ones I just named. “So, you know, I feel good in pass blocking. I know that my technique might not be the best, but you know, in the NFL, it’s really hard to get in the best technique when you’re playing against the Von Millers and the other guys. The linebacker is out there, but, you know, I still got lots to improve on, but I’m confident in the pass blocking aspect.”

Harris should be confident, as he’s done a nice job overall in that department since stepping into the starting role in Pittsburgh. Harris showed he could handle the duties in training camp in the backs on backers drills, and has done well enough through four weeks of the season, aside from a miscue against the Bengals in which he tripped sliding left to right, allowing a sack of Roethlisberger.

Sunday will be arguably his biggest test yet as the Broncos have a terrific front seven, led by Miller, who is having a resurgent year now that he’s fully healthy. Dre’Mont Jones will be a problem along the defensive line, as will nose tackle Mike Purcell, defensive end Shelby Harris and outside linebacker Malik Reed.

The Steelers will need Harris to be at his best with full confidence on Sunday when staying in to pass protect.