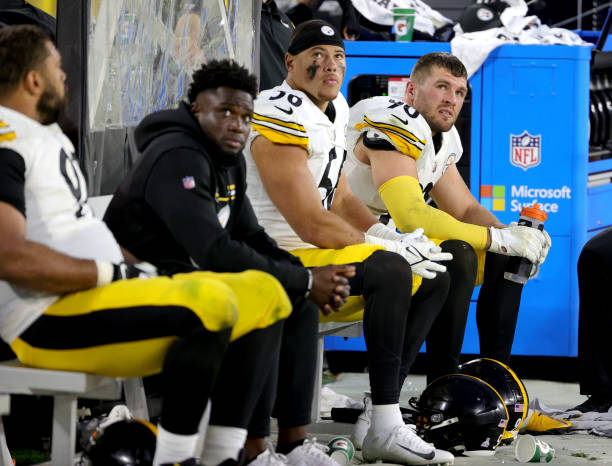 In the wake of a 27-17 loss to the Green Bay Packers on Sunday, dropping the Pittsburgh Steelers to a 1-3 record for the second time in three seasons, there was a lot of introspection, which will continue in the coming week between that game and Pittsburgh’s Week 5 contest hosting the Denver Broncos next weekend.

The face of the franchise for two decades, Ben Roethlisberger was one who openly addressed Sunday staring into the mirror and figuring out how to move forward and improve. His thoughts could represent the offense, and using that same sentence to represent the defense after the game was Alex Highsmith, one of the team’s starting edge rushers and a second-year player out of Charlotte.

The offense struggled almost the entirety of Sunday’s loss, and the Pittsburgh defense wasn’t far behind. The 27 points allowed are the most given up in a game this season, and the Packers’ 367 yards make them the third team of four to record at least that many against the Steelers. After forcing an opening drive punt, the defense gave up points on Green Bay’s next five drives, stretching through the remainder of the first half and into the first two drives of the second half.

Star Green Bay quarterback Aaron Rodgers finished with a pair of touchdown passes, but much of the damage came on the ground. A.J. Dillon and Aaron Jones each got 15 carries, and combined for 129 yards, a 4.3 average. It was the most yards allowed on the ground this season by Pittsburgh

Those carries helped run time off the clock in the second half, which secured Green Bay’s win as the Steeler defense made a pair of stops late and got a forced fumble from Chris Wormley (recovered by T.J. Watt) to give their offense opportunities to climb back into it.

Highsmith and his teammates acknowledge that it isn’t flattering game film to review, or a situation the team wants to be in with a three-game losing streak. That’s why much of the focus is on improving, and taking on next week’s opponent, instead of dwelling on the loss to the Packers.

“That’s one thing we’re just going to have to do going into this week. And so we’re going to shove it down the drain and watch this film, and then move on to the next week’s opponent,” Highsmith said.

The Steelers’ Week 5 game will kick off at 1 p.m., airing on the FOX Network. Each of the teams’ prior four meetings have been decided by one touchdown, Pittsburgh winning last season after Denver took the prior two contests. Denver comes into the game 3-1, but off their lone loss, 23-7 to the Baltimore Ravens.