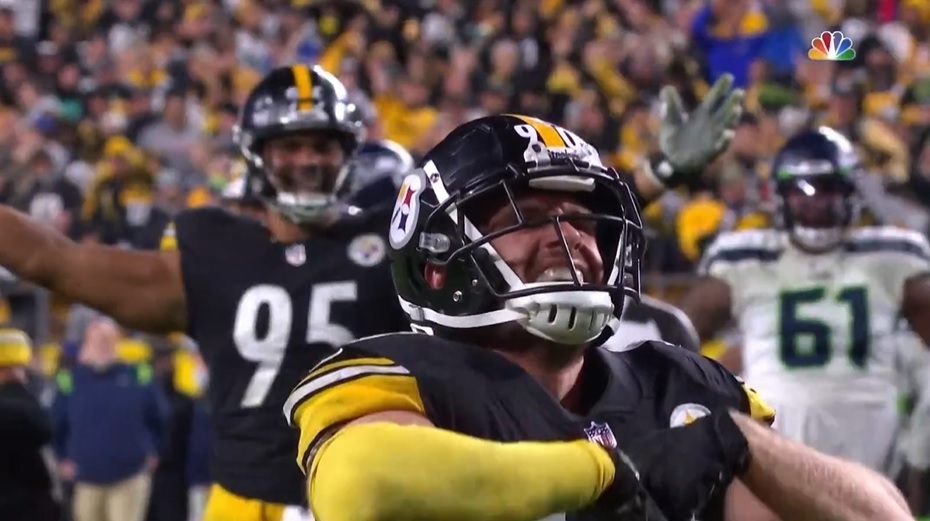 After starting off 1-3 on the year and plenty of doom and gloom to go around, the Pittsburgh Steelers found a way to rally in the final two weeks before the bye week, reeling off two straight wins over the Denver Broncos and Seattle Seahawks to get back to the all-important .500 mark before Halloween.

Dealing with a number of injuries, underperformance and more, the Steelers have won when it matters most, even if it’s ugly.

Though there are still plenty of questions that remain about this Steelers’ team in 2021, sitting at 3-3 at the bye week is a big win for the Steelers.

ESPN’s NFL Nation power rankings slots the Steelers in at No. 15, one slot ahead of the black and gold’s placement in NFL.com’s power rankings, meaning the Steelers are smack-dab in the middle of the pack, which matches their 3-3 record.

NFL.com’s Dan Hanzus kept the Steelers at No. 16 for the second straight week, crediting T.J. Watt for the Steelers’ 23-20 overtime win over the Seahawks.

“There are no words to properly describe how important T.J. Watt is to the Pittsburgh Steelers,” Hanzus writes. “He is the team’s best and most impactful player, and his ability to raise his game in the most crucial of moments makes him one of the greats. We saw that again on Sunday night, a 23-20 overtime win over the Seahawks that featured a dominant Watt performance capped by the Geno Smith strip-sack that set up the game-winning field goal by Chris Boswell. A closer study of the play reveals its brilliance: Watt was playing the run, reacted to Smith’s play-action, fought through several blockers and drilled Smith just as the quarterback thought he had escaped the pocket. Watt is what happens when elite talent meets max effort.”

Hanzus is spot-on here when it comes to his thoughts on Watt and his importance to the Steelers. It’s hard to fathom just where the Steelers would be without Watt on the roster, both as a team and as a defensive unit. He’s a game wrecker that somehow gets better and better every single season. It’s remarkable.

“The Steelers started out sky-high with a win against the Bills — arguably the NFL’s best team after six weeks,” ESPN’s Brooke Pryor writes. “But instead of that triumph setting a tone for the season, it appeared to be an aberration when the Steelers followed it up with three consecutive losses. Led by an inconsistent Ben Roethlisberger, the offense lacked rhythm. And the defense couldn’t overcome injuries to make up for the offensive shortcomings. But after back-to-back wins entering the bye, the Steelers are showing life. If the defense can look more like the one in the fourth quarter and overtime on Sunday night, the Steelers’ confidence rating will rise. Anything short of that, it’ll dip right back down.”

With the win over the Seahawks in Week 6, the Steelers jumped up in ESPN’s power rankings from No. 21 to No. 15, despite the confidence level still dropping. Pittsburgh showed serious signs of concern against the Seahawks, especially defensively against the run, leading to some questions.

The fact remains though that the Steelers are 3-3, are using the bye week to get healthy and correct some early-season problems, and find themselves returning to action against a favorable three-week stretch featuring the depleted Cleveland Browns, the inconsistent Chicago Bears and a toothless Detroit Lions’ squad.