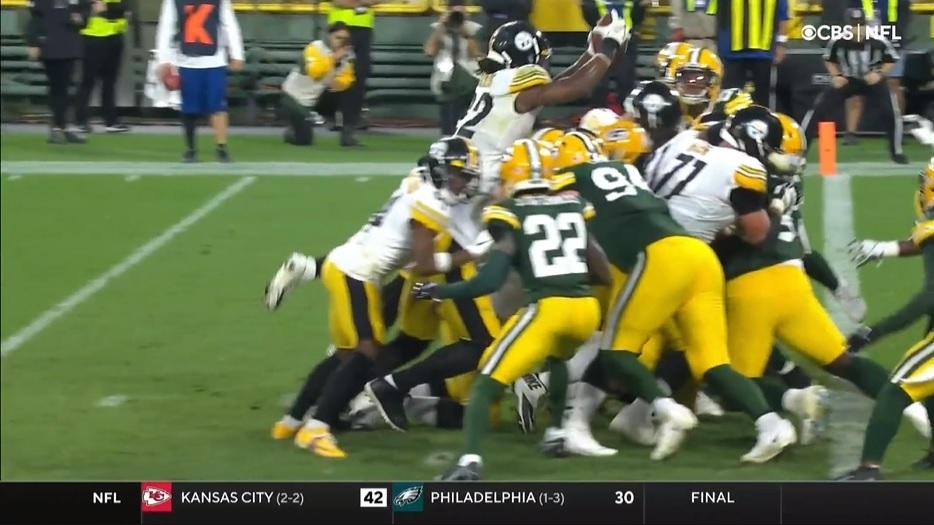 While the Pittsburgh Steelers suffered their third-straight loss at the hands of the Green Bay Packers Sunday by a score of 27-17, the running game showed signs of life at the beginning of the contest that were not there in the first three games of the year. The offensive line was able to generate a more impactful push upfront and rookie RB Najee Harris appeared to be more decisive at hitting the hole hard and making the quick decisions to evade defenders to pick up extra yardage.

Many of you are aware of Dave Bryan’s famous run success rate charting here at Steelers Depot. According to Dave’s charting, 11 of the 15 (73.3%) runs by Najee Harris against the Packers were successful. This number well exceeds any previous percentage recorded by Harris this season, being far over the 50% threshold. When you turn on the tape, you can see the change in Harris after only four short weeks. For example, on this run at the beginning of the game, Harris takes the handoff and attacks the LOS from deep in the backfield, making a subtle cut to his right as he sneaks through the defense to the second level gets sandwiched by two defenders after picking up the first down.

You can see from the clip above that Harris’s vision and processing are quicker than they were Week 1 in Buffalo, making the quick adjustment to exploit the small gap to get of field. We see another example here on this inside draw to the left where Harris bounces it to the C-gap between the TE and LT, evading #52 Rashan Gary and famously falls forward for a nice gain on first down.

Notice how I mentioned that Harris again falls forward to end the run and successfully picks up an extra couple of yards. Alex Kozora also made sure to recognize Harris’s performance in his winner’s and loser’s column following the game stating “Harris is an old school, powerful runner consistently churning out yards after contact and pushing the pile forward.”  While his vision has improved, Harris still loves to put his head down and pick up the tough yards like on this 3rd-and-one situation. Harris takes the handoff and plows into the line, driving his legs on contact to get just enough to move the sticks.

Here is a good rep in the 2nd quarter highlighting both Harris’s vision and strength as a runner, taking the handoff in the pony formation with #44 Derek Watt in the backfield opposite of #7 Ben Roethlisberger and runs the draw to the left, attacking the hole with good burst as he gets wrapped up by the defense, but proceeds to fight forward for a couple extra yards to cap of the successful run.

Harris had many successful runs out of the shotgun Sunday against the Packers, specifically on the draw. Here is another example where Najee takes the draw run to the left, cutting up field in-between #51 Trai Tuner and #85 Eric Ebron, displaying again his improved feel for the finding the hole. However, Ebron misses the block on #42 Oren Burks who trips up Harris as he reaches the second level. Harris attempts to gather himself by sticking his arm out to the turf, but stubbles just enough to fall to the ground after picking up positive yardage.

Pittsburgh did a better job of getting Harris out in space in this contest, whether it be in the passing game or as a runner. The latter occurs here on this outside pitch to the left where the offensive line sells the run to the right, getting Harris the ball in space with plenty of green grass in front of him. #19 JuJu Smith-Schuster and #13 James Washington do a good job of getting respective blocks to help Harris pass the first down marker as Harris evades JuJu’s man coming off the block and churns out more yards after being wrapped up by three Packer defenders.

As mentioned above, Pittsburgh utilized Harris as a receiver out of the backfield and split out in Lambeau Field Sunday afternoon. Harris catches the ball on a swing route to the left on this play and meets Burks again in space. He jumps out of the tackle attempt by Burks and makes contact with rookie CB #21 Eric Stokes, again running his feet on contact and refuses to go down as multiple defenders rally to the ball. He gets a push by teammate by #15 Cody White and wills his way to a first down before being brought down.

Roethlisberger may not have hyped-targeted Harris to the tune of 19 targets like last week, but he still proved to be an effective check down option when given the opportunity to pick up YAC. On this play at the end of the game, Harris sneaks out of the backfield on 2nd down and short and gives Ben the check down option with pressure coming. Harris catches the ball and makes his way toward the left sideline, eventually having the defense converge on him and trap him near the sideline on the gang tackle.  Harris probably should look to get out of bounds to conserve clock, but knowing Harris’s play style, this is something that likely doesn’t come naturally to a guy that seeks contact.

While the game may have been out of reach, Harris managed to score his first rushing touchdown of his NFL career in Green Bay. On this play, we see Harris get the ball on the goal line in a heavy formation. He takes the ball and leaps over the line, using his length and size to extend the ball over the plane to get the score. Harris’s size and explosiveness make him the perfect goal line back to have in situations like these as he can either run through the line with power or elevate over the line with his leaping ability and reach to get the score like he does on this play.

Overall, Harris finished the day with 15 carries for 62 yards (4.1 YPC) and a TD along with six receptions for 29 yards on seven targets. There is no denying that this was Harris’s best performance from a rushing perspective whether it be run success rates, yards per carry, or from watching the film and visibly seeing the improvement in his game. He is noticeably more decisive in his rush attempts, hitting the hole with less hesitancy and truly maximizing every rush attempt he gets.

Obviously, Harris was visibly upset at the end of the game from the camera looks with him on the sideline with his face in his hands. Many will suggest that the Steelers should have opted for an offensive lineman in the first round over Harris but given the names that were still on the board, Harris was the clear choice. He is dynamic as a runner and receiver, showcasing an impressive skillset for a player of his size on a weekly basis while also leaving his mark as a power back in short yardage situations.

It would be difficult to believe the likes of Benny Snell Jr. and Kalen Ballage would have a similar impact as Harris has the first four weeks of the season, and Harris is visibly improving with every game he plays. The offensive line needs to continue to improve, but with the state of the offense as it is and with Harris coming more into his own every week, it would be wise for Pittsburgh to try and make Harris the focal point of the offense, putting less on the plate of Ben Roethlisberger and allow Harris to operate at the three-down feature back he was drafted to be.

What are your thoughts on Najee Harris’s performance against the Green Bay Packers? Do you think he is noticeably improving each week based on what we have seen on tape? What can Pittsburgh do to feature him more in the offense in attempt to sustain drives and improve their offense overall? Please leave your thoughts in the comments section below and thanks again for reading!