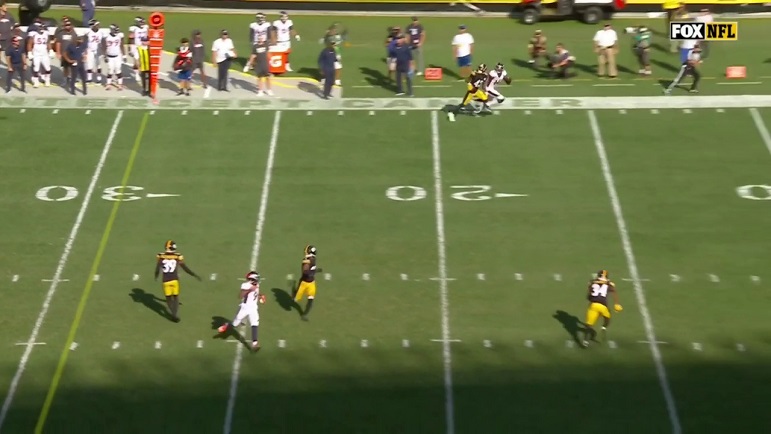 Pittsburgh Steelers cornerback James Pierre made two really big plays in the team’s Week 5 Sunday win against the Denver Broncos, with one of those being a fourth and goal interception in the end zone late in the contest to secure the victory. That interception by Pierre came way after he saved a first half touchdown by tackling Broncos running back Javonte Williams at the Steelers 2-yard line following the rookie scampering 49 yards. That tackle resulted in the Broncos only getting a field goal on that drive.

While Pierre did have two big plays against the Broncos, he also gave up a few as well, with one of those being a 39-yard touchdown reception to wide receiver Courtland Sutton with 5:54 left in the fourth quarter. Pierre has had some issues getting beat over his head so far this season and because of that, Steelers defensive coordinator Keith Butler was asked on Thursday if the young cornerback can do something better to help in preventing those passes being completed over his head.

Right after Sutton beat Pierre for that long touchdown reception on Sutton, I instantly pointed out on Twitter that the young cornerback was looking back to find the football way too soon, and thus that made it easy for him to get out of phase with the Broncos wide receiver. This is a common problem that a lot of cornerbacks have. It’s so not uncommon, and it’s good to hear that the Steelers have recognized the issues and letting their players know about it.

Sutton double move gets the lid off Pierre #Steelers pic.twitter.com/YSCQpD7o52

Pierre can't look back. Needs to stay in phase better and play through catch point #Steelers

Sutton is a very talented receiver. That said, he’s not a burner by any stretch of the imagine and especially on Sunday against the Steelers as he was dealing with a minor ankle injury ahead of that contest. Butler was asked on Wednesday if Sutton should have been able to run right past Pierre on Sunday to begin with on that play, or any other play, for that matter.

“You would like that not to happen, but they, you know, it happened to us twice,” Butler said. “And some of it was, you know, they ran a double move on him one time and max protected and stuff like that. So, we’ve got to recognize, not just him, but all of us, have to recognize when they get in formations where they, what we call, max protect. When they’re max protecting, they aren’t going to throw dadgum five-yard routes, they’re going to go down field on the thing. You know? So, what we’ve got to do is be aware of what the formation is that they’re in and what is the situation. What down is it? People always have tendencies, and when do they like to go deep on you and stuff like that? We’ve gotta take that into account and keep teaching them, you know, and keep telling them what’s going on.”

Situational awareness has been a big issue for Pierre so far in his NFL career and he’s likely to keep getting attacked deep on the outside as he continues to grow and develop and work through his deficiencies. On Sunday, the Steelers will play a very talented set of Seattle Seahawks wide receivers in D.K. Metcalf and Tyler Lockett, and both have won deep countless times so far in their respective NFL careers. Should Pierre need to play more on the outside Sunday night, you can bet that quarterback Geno Smith will look to go after the young cornerback deep in that contest.

“Oh, shoot, anytime you’ve got tall guys who can run, it’s always a problem,” Butler said on Thursday of Metcalf and Lockett and the problems they both will present to the Steelers defense on Sunday night at Heinz Field. “That’s the reason you like to see tall corners and we like tall corners, or bring them in at least, but they’ve gotta be able to run, because these guys can run. So, we’ve gotta be careful with what we do in terms of what we’re playing and trying to keep our guys with a chance to be successful as much as we can. You know, there’s a lot of things you can do, but we’re not going to talk about them right now.”

Well, Pierre is no short cornerback at 6’0″ so look for him to get a few chances to cover both Metcalf and Lockett deep Sunday night at Heinz Field. He better be ready to run against the two wide receivers while not looking back too early at Smith. If he fails to learn from his Week 5 mistake against Sutton, he’s likely to give up yet another deep touchdown or two Sunday night to the Seahawks offense.