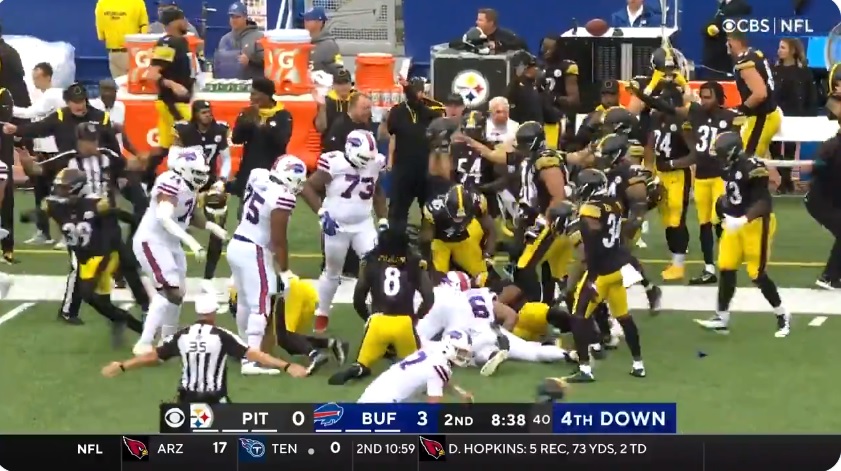 For the first time of 2021, we’re taking a look at the Pittsburgh Steelers’ defense according to the weekly charting we do. We’ll revisit this every four weeks (five weeks at the end of the year with the 17th game) with some of the numbers we’ve been tracking year-by-year. Things like blitz rate, pressures, targets, all the data we can extrapolate out of the weekly charting we conduct.

– Excluding plays negated by penalty, the Steelers’ defense has been on the field for 257 snaps this season. That puts them on pace for 1092.3 in 2021, a number that actually falls right in line with past years in 16-game seasons. Here are the yearly numbers.

Kinda surprising. But the defense barely saw the field against the Bengals, 42 defensive snaps, so that’s keeping these numbers relatively in-line. It’s still about 100 more compared to a season ago.

Always like looking at personnel grouping data. Here it is from the first month.

Nickel with the big lead, responsible for half the team’s snaps. Not a lot of variety in terms of specific types of defense (i.e. 3-5, Amoeba, Goal Line) so far. Sub-package makes up 73.1% of the team’s snaps, a higher percentage than we’ve seen in years past. Some of that stems from how little base the team used against the Buffalo Bills (2 of 79 snaps – 2.5%). Over the last three weeks, the base rate is fairly high (37.4%) in part due to opponents having second half leads and grinding the clock. So these numbers are settling in still.

We’ve mentioned some of this data yesterday but worth repeating. Blitz and 5+ rush numbers.

The Steelers are blitzing 24.3% of the time this season. That’s down from 35.6% last season. Here’s the game-by-game numbers.

So the Bills game is bringing down that overall number, though the other games have still been slightly below average seasonal numbers and they haven’t had a super aggressive performance like they’ve been known to do. Especially in games where injuries would lend themselves to blitzing more to generate pass rush. That hasn’t happened.

Again, Bills game dragging the overall number down but the rates are still low compared to where they’ve been.

Ok let’s get into individual numbers.

Which means zero pressures for: Carlos Davis (who has been hurt for several weeks), Isaiahh Loudermilk, Isaiah Buggs, and Henry Mondeaux. Combined, those guys have played 76 passing snaps. And have zero pressures.

Snaps per pressure. Lower the number, the better.

By comparison, Heyward’s pressure rate last year was 15.9 snaps per pressure. So he’s beating that this season, a sign of how dominant he’s been.

Here’s a wild stat. This number lacks some level of context but the data is still jarring.

An astounding difference with him on and off the field. Really shows his value.

– Not to put it all on him but on Henry Mondeaux’s eight snaps against the run, the Steelers are giving up 10.8 yards per carry. Three runs of 15+ yards.

Very good numbers from Ingram and Watt. Watt’s pressure number last year was 8.7 so he’s just a little below that and Ingram is actually ahead of it. Highsmith has just two pressures in three games but I think he has played better, even as a pass rusher, than those numbers suggest.

Watt’s number right in-line with last year’s (9.4%). Highsmith and Ingram’s especially are higher than I expected but that could “normalize” later in the season.

– Target data for the LBs.

Keep in mind most of these samples are very smaller. Only two worth looking at are Schobert and *maybe* Bush’s.

Again, still small sample sizes. Edmunds has done a good job with a low completion rate but allowed a touchdown to Randall Cobb Sunday. Fitzpatrick with an un-Fitzpatrick like number. Last year, his passer rating against was 19.2. The 61 yard TD by Henry Ruggs really dinged him.

– Worth noting that in the team’s 2-4-5 nickel defense, Maulet and Norwood have each played 52 slot snaps.

– Maulet and Norwood have each blitzed five times this season.