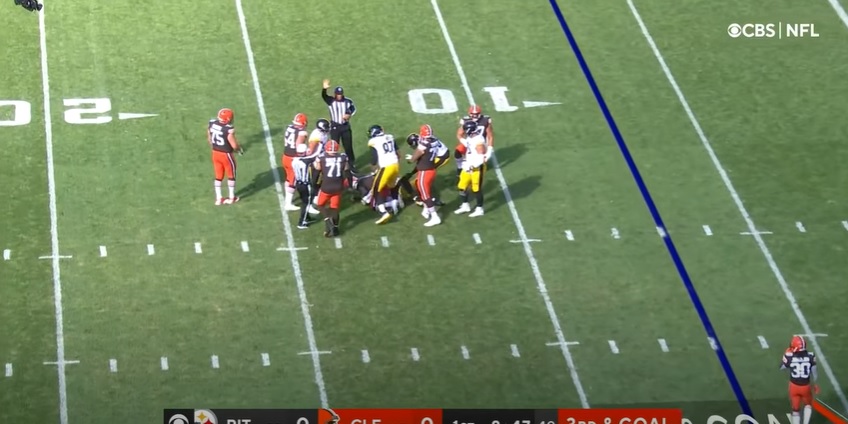 – Always like to look at weird scores and 15-10, while sadly not Scorigami, is an unusual one. It gets weirder. Prior to today, Pittsburgh and Cleveland had played in five games that ended 15-10. Combined, the Steelers and Browns were a combined 0-5, the last one being a Browns’ 2001 loss to Jacksonville.

Someone had to win a 15-10 game today. And that team was Pittsburgh. If you’re wondering, the last 15-10 game the Steelers were involved in was way back in 1972, a loss to the Cincinnati Bengals.

– The 25 combined points by these two teams tonight are the fewest for a Browns/Steelers game since January 1st, 2012, when Pittsburgh won 13-9.

– Now here’s my favorite stat of the weird I’ve been waiting a couple weeks on. Here are the Steelers’ sack leaders through the first seven seasons of a player’s career.

Watt, of course, is only in his *fifth* year. And he’s only halfway through it. And still above every other player in Steelers’ history.

– Those 58 sacks, by the way, are 12th most of all-time for a players first five years. Watt just needs 1.5 more to tie Aaron Donald.

Put it this way. Watt has more sacks in his first five years than Bruce Smith, the man who has the most sacks in NFL history. Watt’s going to keep climbing the charts.

– Cleveland had only been held under 150 yards once this season entering today, an ugly loss to Arizona. Pittsburgh held them to just 96.

– Najee Harris is the first Steelers’ RB since Le’Veon Bell from October 15th to November 12th, 2017 to have at least three straight games with 20+ carries. Harris has gone 23, 24, and 26 over his last three games.

Since 2010, Harris, James Conner, and Le’Veon Bell, are the only three backs with 80+ rushing yards three in a row. Harris is the first to do it since Conner did in 2018.

– Zach Gentry’s three receptions today are the most he’s had in a game since November 10th, 2018, his final year at Michigan, when he posted a 3/42 line in a win over Rutgers.