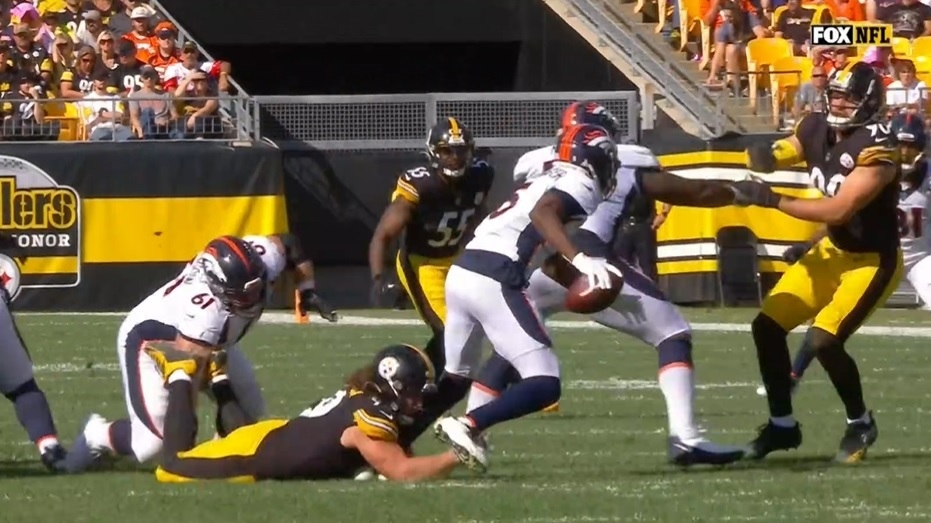 A Pittsburgh Steelers’ win! That might be the weirdest feeling of all after today. Happy to bring some happy thoughts to this article. And of course, some weird ones.

– Let’s start with the score. First game the Pittsburgh Steelers have ever won 27-19. First 27-19 game they’ve ever been apart of, win or lose. Denver, if you’re wondering, had been involved in three. Two wins, one coming as recently as 2016, and one loss.

– Lots of focus on the Steelers’ run game. Pittsburgh ran for 147 yards as a team today, the most they’ve had in a game since putting up 169 on the Houston Texans in Week 3 of last season. They now have as many games with 145+ yards as they did all of 2020.

– Najee Harris was responsible for the bulk of those yards, the teams first 100 yard rusher since Week 6 of last season. His 122 yards are the most by a Steelers’ running back since James Conner in Week 8 of 2019, a 145 yard performance against the Dolphins. A game in which Conner left injured, as Harris did today. So even in these games, it still ends on a somewhat sour note.

– Harris becomes just the 5th Steelers’ rookie back with 120+ yards since 1950 joining: Franco Harris, Bam Morris, Le’Veon Bell, and Jaylen Samuels. Harris is the only one to do it more than once. We’ll see if Harris can join that one-man club.

– Today marks the first time Pittsburgh’s run for 145+ yards in a game without a run longer than 20 yards since October 22nd, 2017, when they ran for 152 in a win over the Cincinnati Bengals.

– Chase Claypool’s 59 yard catch-and-run was the longest play he’s made since…playing the Denver Broncos last year when he recorded his 84 yard touchdown. Good things happen to #11 when the Broncos come to town.

– Ben Roethlisberger averaged 10.1 yards per attempt today, his best figure since a 2018 Thursday night win against the Carolina Panthers when he averaged 13.1. That also came on a day in which he threw the ball 25 times, the same number of passes he threw this afternoon.

– The Steelers lead 17-6 at halftime today, the first time they played with a halftime lead in ten contests. The last game against Washington last season, a lead they’d blow and their first lost of many down the stretch.

– Pittsburgh has now scored TDs on the opening drive of consecutive games for the first time since Weeks 11-12 of the 2017 season when they did so versus the Titans and Packers.

– Henry Mondeaux registered his first NFL sack today. It’s been a long time coming. It’s his first sack in a football game in nearly four years. Last one came October 28th, 2017, while in college against Oregon, a win over Utah.