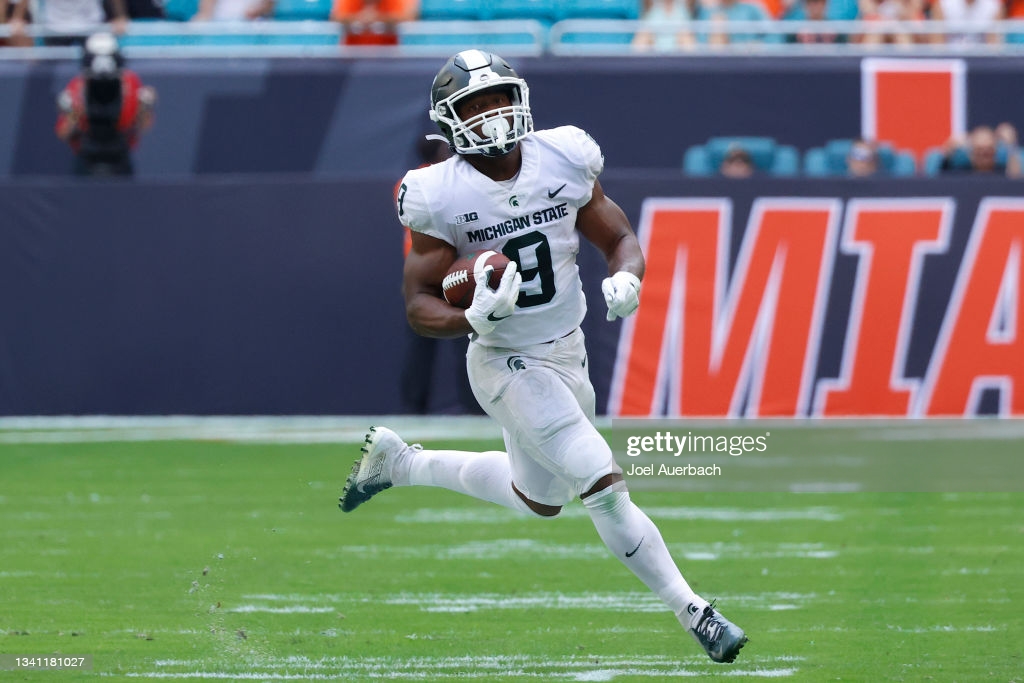 Dave Bryan of Steelers Depot has been riding the Nevada Wolfpack train the entire season, and while I have been with him on the likes of QB Carson Strong and WR Romeo Doubs, I had to do more digging into another favorite of Dave’s on the team: TE Cole Turner. The 6’6, 240lb senior is a WR converts, and it shows on tape as he flashed a couple impressive TD grabs in the 51-20 blowout against UNLV Friday night. Turner’s height and wingspan present a great catch radius that aid in his ability to win jump ball situations.

He made a nice TD catch in the corner of the end zone catching the ball from his frame, but that failed in comparison to the one-handed TD grab he made as he dove into the end zone, reaching out just enough to complete the impressive catch. He finished the game with seven receptions for 63 yards and two TDs. Turner will need to add size and prove to be a more capable blocker to fit the bill as a traditional TE in the league, but his ability to play the pumped-up WR role like that of Mike Gesicki of the Dolphins will have NFL teams scheming up mismatches for him against different coverage looks.

I highlighted Walker III as a player to keep an eye on in the matchup between the Spartans and the Wolverines, and I will gladly give myself a pat on the back for this call. Walker III had a day on the ground against Michigan in East Lansing, finishing the day with 23 carries for 197 yards (8.6 YPC) and five rushing TDs while catching three passes for 11 yards. Walker III ripped apart the Michigan defense, gashing them for long runs when blocking got him to the second level as well as displayed good strength and power running in-between the tackles. He showed more burst and acceleration than I remembered seen in games past, suggesting that he may a capable starter in the league.

Ahmad “Sauce” Gardner gets all the national media exposure, and rightfully so, but CB Coby Bryant deserves to have his name up there with the top CB prospects in the nation as well. The 6’1, 198lb senior put together another solid performance against Tulane in the 31-12 win for the Bearcats, making two tackles and picking off another pass to put him at three for the year. Bryant is a long, press man corner that can play bump-and-run coverage with most receivers he will see on the outside and has a knack of playing the football in the air. Bryant now has ten INTs in his career at Cincinnati and is battle tested, suggesting his stock should rise to possibly rival Gardner’s in April’s draft.

I wanted to write in “the whole Georgia Defense” here in this section, as they absolutely dominated the Florida Gators in the 34-7 beatdown in Jacksonville. However, LB Nakobe Dean stood out for his stellar play throughout the entire contest. The 6’0, 225lb junior was all over the field for the Dawgs Defense, making several key stops in run defense, putting pressure on the passer as a blitzer, making a couple of impressive PBUs, and jumping a pass on the right sideline and taking it to the house for the pick-six. Dean is an instinctual defender that has the play recognition and quickness to react almost immediately to what is happening in front of him, playing play routinely for the Bulldogs Defense.

The emotional leader of the defense also leads by example in his play, playing with a great motor on the field and was even the first man down the field on several punt coverage units on special teams. HC Kirby Smart praised dean after the game for his performance and what he means as the leader on the defensive side of the football. A mechanical engineering major, Dean has his head on straight and had a game that could potentially put him at the top of the ILB rankings for the 2022 NFL Draft. If Pittsburgh wants to add a LB that “makes the routine plays routinely” and has the capability to make splash plays as a high-character player, Dean is the guy.

The Wake Forest Demon Deacons are off to their best start since the 1940s, and a lot of credit must go to the performance of QB Sam Hartman this season. Wake Forest is currently 8-0 on the season and just completed a shellacking of the Duke Blue Devils Saturday afternoon, and Hartman had quite the day on the stat sheet. Hartman was 24/37 (64.9%) for 402 yards and three TDs through the air while adding six carries for 61 yards and two scores on the ground.

The 6’1, 208lb redshirt sophomore may not have ideal size, but he delivers an accurate ball down the field, putting it on his receivers in-stride for big plays in the passing game while also having that mobility and athleticism to escape the pocket and pick up yards on the ground with his legs. Much like Pitt QB Kenny Pickett, Hartman has seen his stock skyrocket during this breakout season, posting 2476 yards and 23 TDs to three INTs along with 207 yards rushing and six rushing scores in eight games played. It remains to be seen how his skillset will specifically translate to the league, but there is no denying his performance this far has put him in the conversation for draft eligible QBs this spring.