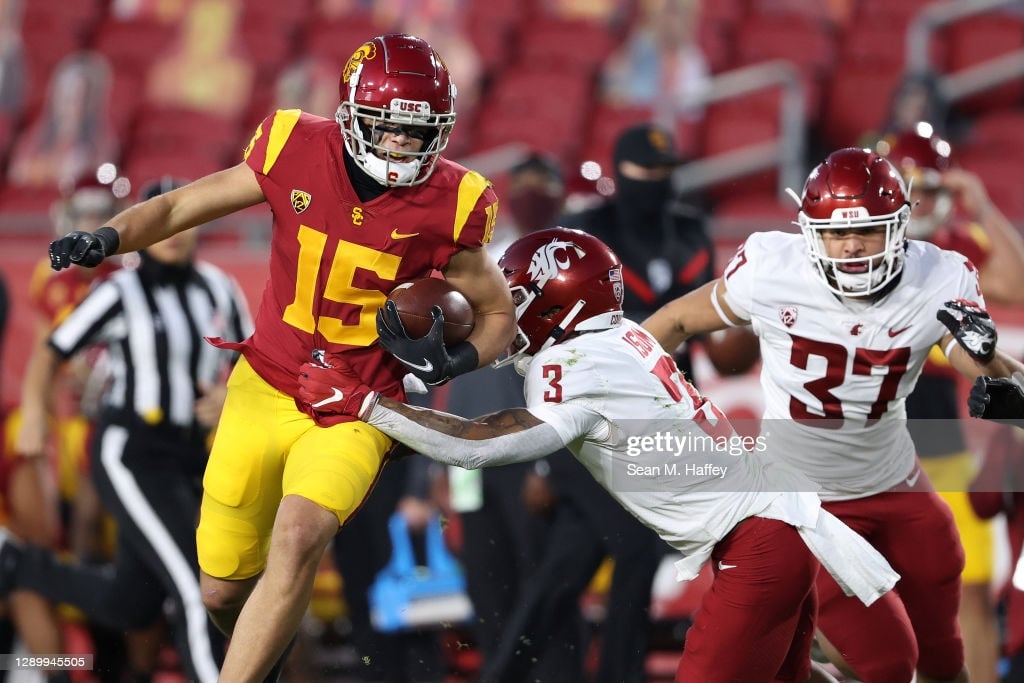 Following the slate of games on Saturday, we will be highlighting several college football prospects and their respective performances as well as how they could be viewed going forward into the 2022 NFL Draft, specifically by the Pittsburgh Steelers.

The Razorbacks ended a three-game skid Saturday with a 45-3 beatdown of Arkansas-Pine Bluff. The offense was extremely successful on the afternoon and star wideout Treylon Burks was a big component of that. While considering the sub-par competition, Burks made an impact as a receiver as well as a runner in this contest, posting four receptions for 89 yards (22.3YPR) and two TDs along with two carries for 56 yards rushing including a 49-yard TD run. Burks had no problem taking the top off the defense in this one, easily beating man coverage and separating deep down the field for big gains.

The TD run came on a jet sweep where he displayed his speed and explosiveness in the open field, easily pulling away from the defense in pursuit for the long rushing score. Burks has been on fire so far this season, showcasing that elite athleticism in a 6’3, 225lb frame while also making difficult one-handed grabs or sideline catches that take finesse to come down with in-bounds. His size, explosiveness, and skillset are reminiscent of Seattle Seahawks WR D.K. Metcalf, and he can feasibly have a similar impact once in the league. Burks is making a strong case to be the first WR drafted this spring, and any more highlight reel plays down the stretch could cement his status as WR1.

The Ducks avoided a scare at the Rose Bowl Saturday afternoon, holding off the UCLA Bruins 34-31. Star pass rusher Kayvon Thibodeaux had a game with all the national exposure of College Gameday in Pasadena, CA for Oregon, finishing the day with nine total stops (eight solo), 4.5 TFLs, two sacks, and a forced fumble. Thibodeaux showcased his talent in front of several scouts and GMs in attendance for the game, being basically unblockable all game long against the Bruin offensive line. Thibodeaux displayed great burst off the snap as well as impressive strength and power at the point of attack, beating blocks with regularity as he relentlessly rushed the passer, forcing several arid throws as well as getting home twice.

Thibodeaux ended up knocking opposing QB Dorian Thompson-Robinson out of the game on his second sack, forcing UCLA to deploy the freshman into the game with two minutes left while driving the field in attempt to tie the game. Needless to say, the backup threw a pick at the end of the game to seal the Duck victory. Thibodeaux had a heck of a performance from start to finish, and with the likes of the Lions and Texans GMs in attendance, there is a good chance he may have cemented his status as the #1 overall selection in the 2022 NFL Draft.

Despite falling to Ole Miss on the road 31-17, LSU LB Damone Clark had himself a day on the defensive side of the ball for the Tigers. Clark was in on 19 tackles (seven solo), 2.5 TFLs, and a sack. His pursuit of the football was unquestioned as the defensive leader for the Tigers, playing chase to the ball carrier and putting pressure on Heisman hopeful Matt Corral when sent on the blitz. Clark was also a capable pass coverage defender from the linebacker position, showing great speed and range for a 6’3, 245lb box player. The senior always makes an effort to get to the football, whether that be as the first man there or to clean up the play.

His physical stature, athletic traits, and intangibles as an emotional leader of the team sporting the famous #18 jersey for LSU make him the kind of player and person NFL scouting departments are going to fall in love with during the draft process. Should Pittsburgh look to shore up the LB core and want a physical tone setter in the middle that plays his tail off every play, Clark should be a player on their radar.

The Badgers pulled off the upset in West Lafayette Saturday afternoon to the tune of a 30-13 victory over the Boilermakers. The Wisconsin defense stifled the Purdue offense thanks to the effort of junior linebacker Leo Chenal. The 6’2, 261lb defender had himself a game, posting nine total tackles (eight solo), 5.5 TFLs, and 3.5 sacks. Chenal was all over the filed for the Badgers, swarming to the football, and living in the Purdue backfield. The well-built linebacker played from an off-ball position and was a blur when sent on the blitz, getting to the passer almost immediately. Given his strengths as a run defender, Chenal profiles to be a capable and disruptive BUCK linebacker in a 3-4 or a SAM in a 4-3 front.

The Trojans fell to the hands of their rival Notre Dame in South Bend Saturday night, but Drake London continued his stellar play against the Irish. The 6’5, 210lb junior was a target hog for QB Kedon Slovis, and rightfully so. London finished the game with 15 receptions for 171 yards (11.4YPR). He utilized his size and length to his advantage against opposing defensive backs, climbing the ladder on 50/50 ball attempts, and coming down with the contested catch with regularity. Many scouts have criticized London from getting most of his production out of the slot prior to this season, but London excelled both inside and on the boundary, getting lose against coverage down the field and elevating for the jump ball whilst getting hit.

His route running and ability to separate from coverage came as a pleasant surprise to me given his size, and his usage and play style are eerily similar to current Tampa Bay Buccaneers WR Mike Evans. Pittsburgh already has a similar type of receiver to London in Chase Claypool on the roster, but his physical, go-up-and-get-it play style along with his versatility in deployment make him an enticing option for a team looking for a big-bodied playmaker that can impose his will on a secondary.