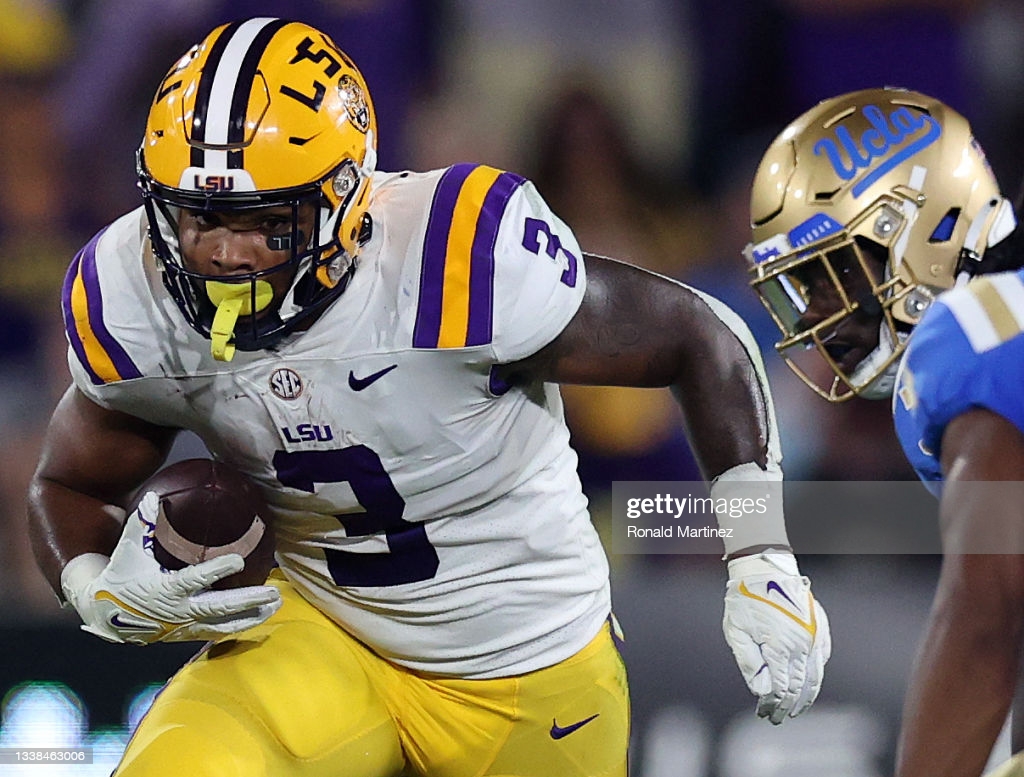 The Purdue Boilermakers went into Kinnick Stadium and pulled off the upset over the Hawkeyes thanks to the efforts of WR David Bell. The 6’2, 205lb junior had a day against the vaunted Hawkeye secondary reeling in 11 receptions for 240 yards (21.8YPR) and a TD in the 24-7 win over #2 Iowa. Bell tore apart the Iowa defense last season as well, but this time around his efforts helped Purdue knock off the #2 team in the nation on the road. Bell took advantage of soft coverage most of the afternoon, catching the ball with cushion provided by opposing defensive backs and did well to pick up yards after the catch.

He served as a regular chain mover and go-to target for the offense on third down passing situations, having the secure hands to come down with the catch and keep the offense on the field. While Bell made most of his plays against soft coverage, he also showcased the ability to win vertical, having a 60yd reception on the day, thus being a threat to run past defensive backs as well as beat them as a technician. Bell is a well-rounded receiver prospect, and his performance against a secondary that has given opposing offenses fits thus far in 2021 will only help raise his draft stock.

The Georgia Bulldogs secured yet another convincing win at home in Athens against SEC rival Kentucky to the score of 30-13. The defense especially had strong performance on the day, controlling the LOS and stalled a Wildcat offense that had been scoring over 30ppg regularly this season. While there are many stars along the talented Dawgs defense, LB Quay Walker stood out specifically in this matchup. The 6’4, 240lb senior posted 9 total stops (6 solo) on the afternoon, showcasing his versatility by playing up at the LOS as well as in the box at the second level of the defense as a run-and-chase defender.

His size and length make him an imposing defender that can create a pass rush, but his speed and explosiveness allow him to be effective as a traditional off-ball linebacker. His physical traits and play style are reminiscent of former Bulldogs LB Lorenzo Carter who plays a hybrid role with the New York Giants. Should the Dawgs continue to play at a championship level, expect Walker to be held in a similar light as Carter was come draft season.

Tyrion Davis-Price had not been a household name going into the matchup against the Florida Gators, but the Tigers back now graces the record books for the LSU program and his name will live in infamy for the Gators going forward as well. Davis Price had the game of his life in Death Valley Saturday, getting 36 carries for 287 yards (8.0YPC) and three TDs to lead the Tigers to a 49-42 win over the Florida Gators. The 6’1, 232lb junior set the LSU single-game record for rushing yards in a game while also posting the most yards a Florida defense has ever surrendered to one runner in program history.

Davis-Price is a physical runner that refuses to go down on first contact, rumbling to the second level and required multiple defenders to bring him down. His running style and aggressiveness reminded me of Javonte Williams along with from LSU RB Derrius Guice with how he dismantled the Gators defense. Davis-Price was only a part-time player to start the season, but has come on strong the last two weeks, having another 100+ yard, two TD effort the week prior against Kentucky. Should he finish the year strong, Davis-Price could play himself into a Day Three selection as a physical compliment to a change-of-pace, receiving back for a team that wants a downhill, no-nonsense runner in-between the tackles.

Alabama rolled to another win Saturday night after falling to Texas A&M last weekend, beating Mississippi State on the road 49-9. The defense looked more in-sync in this matchup, recording seven sacks and three INTs as they gave the Bulldogs’ offense fits all night. S Jordan Battle made his impact on the game for the Tide, recording 7 total tackles (5 solo) two PBUs, and two INTs with one returned for a TD. The 6’1, 210lb junior was regarded as one of the top safety prospects in the nation coming into the season, and he reminded the national media and the scouting community of that in this matchup.

Battle has the length and range to make an impact in the passing game as a free defender roaming the backend of the defense that can make plays on the ball in the air. He has the ball skills and instincts to challenge receivers at the catch point and come down with the ball if in the right position. However, Battle is more well-known for his physicality and demeanor as a run-and-hit defender that wants to go through you as a tackler and impose his will on pass catchers coming over the middle.

This performance did Battle well, showing he can excel in coverage as well as in run support. Should Pittsburgh decide not to re-sign Terrell Edmunds this offseason, the potential tandem of Battle and Minkah Fitzpatrick on the backend of the defense would strike fear in the hearts of opposing QBs with their ability to take the ball away or separate ball from man.

Ole Miss went into Knoxville and pulled out the win 31-26 against the Tennessee Volunteers. QB Matt Corral had quite the interesting performance on the night, going 21/38 (55.3%) for 231 yards and two TDs with one INT through the air, but added 30 carries for 195 yards (6.5 YPC) on the ground with his legs. Passing-wise, it wasn’t a crisp day at the office for Corral who had his lowest completion percentage on the season and recorded his first interception of the year. However, we still saw moments of excellence where Corral showcased his stellar arm talent both from the pocket and on the run, making the off-platform throws to his receivers in-stride with room to run.

While he undoubtedly forced the throw on the pick in the second half, he did do a great job evading pressure in the pocket on his scrambles, picking up chucks of yardage on the ground to keep the offense on-schedule and take what the defense was giving him rather than forcing the ball into coverage. You don’t like to see a turnover in any circumstance, but the fact that Corral didn’t have an INT until his fifth game this season after having 14 last season does show his improvement of taking care of the football. He also posted the second-most yards rushing by a QB in program history, showing he can win games with his arm as well as his legs.