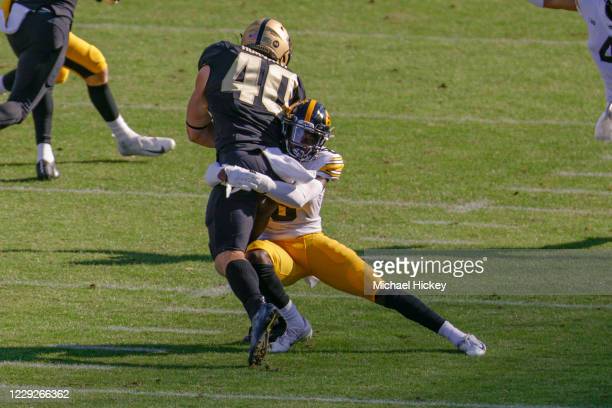 When Eric Gray transferred from Tennessee to Oklahoma this offseason, the belief was that he would unseat Kennedy Brooks as the feature back in the Sooner offense. Brooks regained his status as the bellow for Oklahoma in the Red River Rivalry Game against Texas to the tune of 25 carries for 217 yards (8.7YPC) and two TDs. Gray only saw six carries for 37 yards on the day as Brooks gashed the Longhorn defense on the ground including a 33-yard run to ice the game in overtime.

Brooks is a stout runner (5’11, 215lb) that runs with power in-between the tackles and has the hands to be a capable pass catcher out of the backfield. If Brooks can build off of this performance and fend off Gray for the lead back role, look for him to cement his status as a potential Day Two or Early Day Three selection going forward into the main slate of Big-12 Conference play

After coming off of a mediocre performance last week against the Alabama Crimson Tide, all eye were going to be on Matt Corral and how he would perform in a matchup against Arkansas. Corral had a statistically impressive performance, going 14/21 for 287 yards (13.7YPA) and two TDs while adding in 15 carries for 94 yards (6.3YPC) and two scores on the ground. We can criticize Corral for a couple of his long throws being wide open with busted coverage, but his velocity on his short passes as well as arm strength to heave the ball over 60 yards in the air was truly impressive to see.

He used his legs effectively as a passer, getting outside of the pocket to extend plays as well as pick up yards on the ground, giving the offense a legit threat with his rushing ability to power through would-be tacklers and have the determination to extend across the plain for the score on one of his TD runs. What should out to me about Corral’s performance again was his ability to take care of the football as he didn’t produce a turnover in the game against a team that picked him off six times last season. We are seeing the maturation process of Corral before our very eyes, and after underwhelming performances by other draft eligible QBs Saturday, Corral is setting himself up to be QB1.

The Iowa Hawkeyes pulled off the big-time victory at home against Penn State in the top-5 showdown thanks to the efforts of the defense. The Hawks recorded four INTs on the day, one coming from senior CB Matt Hankins. Hankins finished the game with five tackles (three solo) one INT, but his impact was much more than that. He was tasked with manning up with Penn State WR Jahan Dotson for much of the contest, and he finished the game relatively quiet despite being heavily targeted. That’s a credit to Hankins as well as the entire Hawkeye secondary to shut down one of the top WR prospects in the nation.

Hankins has played well in several high-profile games this season, routinely taking the football away. Should he continue to have a nose for the ball and the team play themselves into title contention for the Big Ten crown, look for Hankins to rise up draft boards this spring.

The Michigan Wolverines pulled out the win in Lincoln Saturday night in a close one against the Nebraska Cornhuskers. DB Daxton Hill continued his strong play this season with another stellar performance, recording five total tackles (three solo) 0.5 TFL, and one INT that came on a pass breakup where he was running in-stride with the TE over the middle of the field and batted the ball into the air and kept it from hitting the ground, securing the highlight pick.

Hill has stood out in the Wolverines secondary due to his versatility, being able to play single-high safety, split-zone safety, in the box, in the nickel, and even as a traditional boundary cornerback, covering WRs up the sideline with good technique. This versatility is highly coveted in the NFL and Hill can play multiple spots on the backend of the defense at a high level. Should he continue to excel in pass coverage and make splash plays, he could enter the conversation to be potentially one of the first defensive backs off the board in the spring thanks to all of the tools he has in his toolbox.

I called my shot on Williams having a big game prior to the matchup with the Aggies in my players to watch for article, and while the Crimson Tide fell to Texas A&M in College Station Saturday night, Williams had a game with 10 receptions for 146 yards (14.6 YPR) and two TDs. Williams demonstrated the speed that I have touted him for in recent articles, getting past the defense on a stick-and-go route concept for a 29-yard TD strike. However, Williams proved to be an all-around threat for the Alabama passing game, working over the middle of the field and near the LOS as well as attacking defenses vertically.

Williams made one grab over the middle where two defenders attacked the catch point, but he managed to hold onto the ball and complete the process of the catch. He is gaining steam in terms of being the higher-profile draft prospect at WR for the Tide over running mate John Metchie III, and thus far as earned it based on his production. Should Pittsburgh lose both JuJu Smith-Schuster and James Washington to free agency this offseason, a glaring need for a seam stretcher will exist in the team’s receiving core. Depending on how high Williams’ draft stock rises, he would be a great fit next to Diontae Johnson and Chase Claypool as a vertical threat that can work all quadrants of the field.