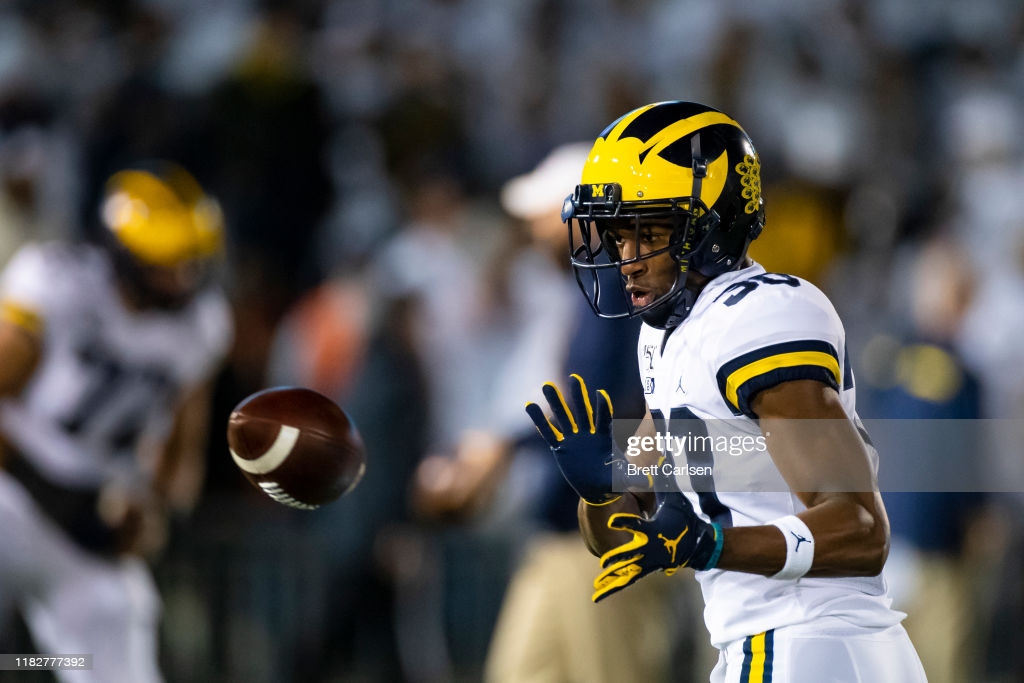 The Michigan Wolverines pulled out the win in Lincoln Saturday night in a close one against the Nebraska Cornhuskers. Michigan trialed heading into the fourth quarter but ended up winning the contest 32-29. The Michigan defense made some key plays throughout the game to secure the victory, including several impact plays by Daxton Hill. Hill continued his strong play this season with another stellar performance, recording five total tackles (three solo) 0.5 TFL, and one INT. One thing that stood out from watching Hill was his versatility, playing multiple spots in the defensive backfield. Traditionally a safety that was highly touted coming out of high school, Hill has become a Swiss Army Knife-type of defender, being capable to nearly every spot at a high level.

Last season, Hill was utilized more as a split zone safety/deep safety that had the range to contest passes down the field as well as roll up into the box as more of a strong safety. This season, Hill has been asked to play more cornerback for the Wolverines, both out on the boundary as well as in the slot as the nickel/dime defender.

Here on this screen pass play to the receiver on the jet-motion to the right, Hill aligns as the nickel defender in the slot covering the TE detached from the LOS. Hill quickly recognizes the screen pass and breaks on the ball, evading the cut block by the TE as he continues his pursuit and squares up the receiver in the backfield, wrapping him up for a loss of yardage on the play to put Nebraska behind the chains.

The interception that Hill made during the game came on a pass breakup where he was more of a second level defender on the outside of the box tasked with covering the in-line TE. Hill recognizes the pass and runs in-stride with the TE over the middle of the field, keeping his eyes on the ball as it is thrown and bats the ball into the air as he leaps forward to cover the pass, managing to knock it away from the intended target, but keeps his focus on the ball as it falls to the ground. Hill catches the ball before it hits the ground, securing the interception and the turnover for the defense.

On this zoomed-in TV copy of the play, we see Hill’s situational awareness on full display as he nearly intercepts the ball on his try attempt, having the TE tip the ball out of his hands, but Hill keeps his eyes on the ball as he falls to the ground, breaking his fall with his arms, yet never takes his eyes off the ball falling back to him. Hill saves the ball from falling incomplete to the turf by snatching it before it can hit the ground for the highlight play. Overall, a great heads-up play by Hill to get the pick by having great focus on the ball.

Along with playing in the slot, Hill lined up several times as an outside cornerback against the Huskers. While safety is his more “natural position” Hills appears to be well-versed in man coverage while on an island. Watch this play where Hill lines up at the bottom of the screen and is playing press man coverage on the receiver split out to the left of the formation. While the play ends up being a run up the middle, Hill executes well on the option play, opening up his hips and carries the receiver up the sideline, staying in-phase with him in coverage.

We see Hill use similar technique on this pass play, lining up as the right-side CB across from the WR in man coverage. His feet mirror the receiver on the snap of the football, turning and running with the receiver up the sideline as the receiver tries to get an outside release. Hill stays in the receiver’s hip pocket throughout the entire play, staying sticky in coverage and not allowing any separation by the receiver. This discourages #2 Adrian Martinez from taking a shot downfield, checking it down in the flat where the running back gets cut down for a big loss on the play.

Hill’s biggest play of the night arguably came on this fourth down stop to end the Huskers’ chances of getting into field goal range to tie the game. On this play. Hill lines up in the slot and on the snap of the ball, he flips his hips to mirror the right sideline as the receiver tries to get a outside release. Meanwhile, Hill works over the crossing pattern with the outside receiver coming across his face, staying in-phase in coverage and runs stride-for-stride with his man down the sideline as Martinez puts up the deep ball. Hill maintains great position on his man and makes a diving attempt at the ball, ultimately coming short, but still forces the key incompletion.

Overall, Hill may not have had a gaudy stat line in the team’s win over the Huskers, but he stood out in the Wolverines secondary due to his versatility, being able to play both inside and outside as a cover man as well as a traditional box safety and deep safety. Hill displayed good technique in man coverage, covering WRs up the sideline as well as TEs over the middle of the field. Hill also showed to be a willing and capable tackler in run support, coming down hill on running backs and receiver screens hard in pursuit to make plays in the backfield.

This versatility, jack-of-all-trades defender is highly coveted in the NFL, and Hill has the athletic profile and film out there where he can play multiple spots on the backend of the defense at a high level. Given the perceived needs in Pittsburgh’s secondary in 2022 with veteran CB Joe Haden being a free agent and S Terrell Edmunds also scheduled to hit free agency, the Steelers could turn to a play like Daxton Hill who can wear multiple hats in the secondary, much like FS Minkah Fitzpatrick and CB Cam Sutton, allowing Pittsburgh to move guys around more in the secondary and disguise coverages thanks to the skillset of their personnel.

There still is plenty of football left to be played this season, but should Hill continue to excel in pass coverage situations and make splash plays as a cover man as well as a run-and-hit defender, he should see his draft stock rise and be potentially one of the first defensive backs off the board come the 2022 NFL Draft.

What are your thoughts on Daxton Hill’s performance against the Nebraska Cornhuskers? Do you think he is playing himself into the conversation as one of the best defensive backs in this draft class? Should he be classified as a safety or potentially look to move to the outside at the next level? Who would you compare his style of play to in the NFL game today? Please leave your thoughts in the comments section below and thanks again for reading!