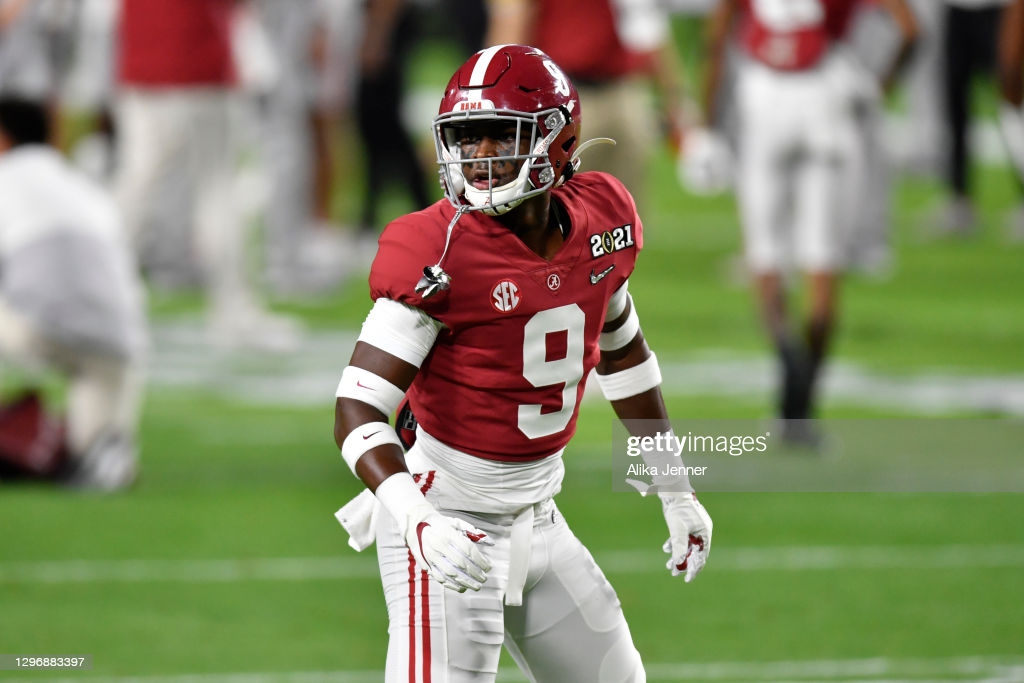 Alabama rolled to another win Saturday night after falling to Texas A&M last weekend, beating Mississippi State on the road 49-9. The defense looked more in-sync in this matchup after being challenged by HC Nick Saban, stating that the defense needed to play at a “championship level and make championship plays” in order to rebound from last week’s defeat and put themselves back into the discussion of the College Football Playoff. S Jordan Battle stepped up as an elected team captain for that game and made his impact on the game for the Tide, recording 7 total tackles (5 solo) two PBUs, and two INTs with one returned for a TD.

The 6’1, 210lb junior was regarded as one of the top safety prospects in the nation coming into the season, and he reminded the national media and the scouting community of that in this matchup. When previously watching Battle play from last season, I saw a safety more suited for the strong safety/box safety role, being a menacing hitter that comes and lays the boom on receivers over the middle and while in pursuit of the football. However, Saturday showed a well-rounded safety prospect who played single-high, split zone, in the dime/nickel, and in the box for the Tide defense.

Battle’s best play of the night came on this INT returned for a TD with four minutes left in the first quarter. Notice how Battle aligns as a deep safety in a three-high look with the linebacker backed up in coverage, manning the sideline to the bottom of your screen. Battle reads the QB’s eyes in a slight backpedal then breaks on the ball once thrown, covering ground to the sideline as he jumps the route by the receiver and picks off the pass, turning up the sideline with a convoy of blocker as he runs to the end zone. What makes me smile is Battle dropping the shoulder at the end of the play on the QB’s wimpy tackle attempt, encapsulating that physical demeanor.

With the end zone view of the play, we see how well Battle covers ground, having the length and range to make an impact in the passing game as a free defender roaming the backend of the defense as he makes a play on the ball in the air. This is the skill set you like to see from a starting free safety, but with Battle’s capability of playing both positions, that only adds to his value.

Earlier in the first quarter, we see Battle walk up into the box near the LOS on the second-and-short scenario. He presses the line on the snap, keeping his shoulders square to the LOS. Once he locates the football, he takes a good angle to the ball carrier and lays a powerful hit, dropping him immediately to the ground as he goes in with his right arm to try and punch the ball out. The runner ends up getting the first down here, but I like to see Battle’s stopping power in run support, being more than a finesse ballhawk in the secondary and wants to go through you as a tackler.

Here is another tackle made by Battle near the beginning of the third quarter. Battle lines up as a single-high safety on the play and starts to drive toward the left sideline in a backpedal. The pass is completed to the slot receiver on the right side of the field and Battle is quick to meet him after the catch, breaking down to square up the receiver and wrap him up in the open field to prevent further YAC. Battle goes up high on his tackle and should drop his strike zone to the torso. However, he runs his legs on contact and swings him down to the ground without giving up additional yardage on the play.

Battle’s final big play of the day comes on this desperation heave to the end zone at the end of the game that he picks off for his second interception of the night. The QB faces a bunch of pressure in a collapsing pocket and chucks it up, giving Battle the perfect opportunity to track it in the air and position himself to come down with the turnover. It may be a “low quality” INT due to the circumstances, but I like how Battle demonstrates that he has the ball skills and instincts to challenge receivers at the catch point and come down with the ball if in the right position. He has a nose for finding the ball and making a play, which is invaluable in today’s pass hay NFL.

This performance did Battle well, showing he can excel in coverage as well as in run support. He looks to often impose his will on pass catchers coming over the middle as a missile but has the versatility of playing multiple spots in the secondary and possesses the range to flip-flop with the other safety on the field to disguise coverages. Should Pittsburgh decide not to re-sign Terrell Edmunds this offseason, the potential tandem of Battle and Minkah Fitzpatrick on the backend of the defense would strike fear in the hearts of opposing QBs with their ability to take the ball away or separate ball from man.

What are your thoughts on Jordan Battle’s performance against Mississippi State? Do you think he showcased the skillset of a versatile NFL safety? Do you think He can excel both in the box and deep on the backend of the defense at the next level? How do you see him potentially fitting as a potential draft target in Pittsburgh? Please leave your thoughts in the comments section below and thanks again for reading!