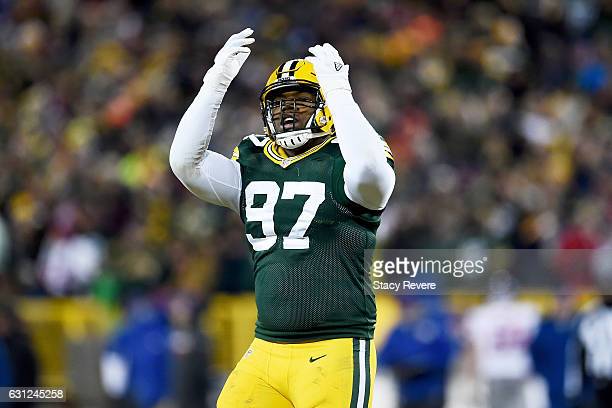 On paper, the run defense looks only about average. Allowing 4.4 yards per carry and nine runs of 10+ yards, both numbers sitting slightly below average in the league (21st and tied for 19th respectively). It’s a base 3-4 front and there’s on guy up front, who Tom will talk more about below is Kenny Clark. Their man in the middle, he can play up and down the line and you want to run away from him.

Speaking about their front a bit more broadly, they’ll go with a Bear look and play their three down linemen tight and between the tackles. Covering up both guards and the center or playing with a heavy inside shade on the tackle. Some examples. 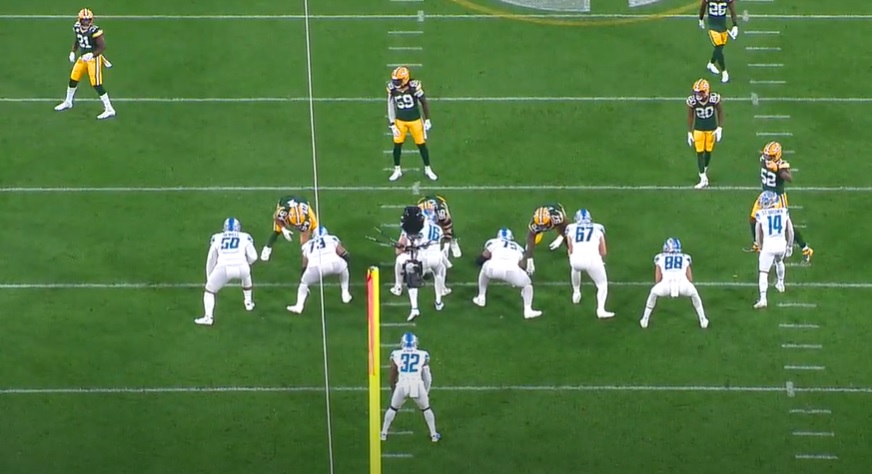 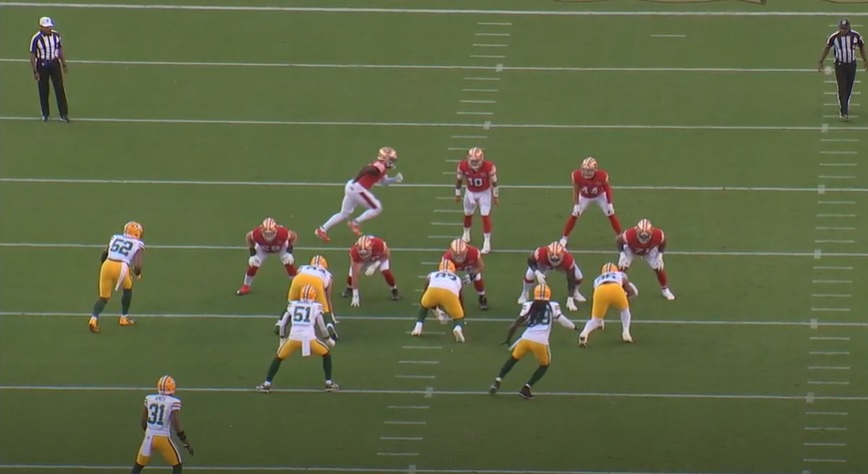 Their linebackers do a nice job being patient flowing against pullers and are aggressive enough that they’ll backdoor the pullers and make the play behind them instead of taking on the block or working over the top. An example.

But back to Clark. Every Steelers’ fan should agree this offense shouldn’t run at #97. Far better teams have tried. If you run towards him and solo block him, you’ll pay the price. He’s not going to get stuck or stay on blocks.

Best thing you can do is combo and run away from the man. Like this toss play the Lions ran for six.

Some other stats. Leading tackler is De’Vondre Campbell with 31 of them. Safety Adrian Amos is second with 24. As a team, they’re still looking to force their first fumble of the year. Their third down defense has been especially poor, allowing offenses to convert 53.3% of the time. That’s 30th in the league. Green Bay are a good tackling team tied for the 7th fewest with just 16 across their first three games.

The pass defense has done an ok job, though its pass rush has sorely missed Za’Darius Smith who landed on IR after Week One and won’t face the Steelers’ Sunday. As a team, they have just five sacks in three games and no one has more than one of them. The only player with one sack is Preston Smith, with one. They are getting some pressure, former first round pick Rashon Gary has six of them (but just a half-sack) but they aren’t able to finish the play.

The Packers have kept a lid on things with just five completions of 20+ yards, tied for third best in the league. Their top cover corner is Jaire Alexander, a young player really coming into his own and picked off his first pass of the season in last week’s win over the 49ers.

The numbers show the Packers are a blitz heavy team at 29.9%, tied fifth most in football, but speaking to their lack of pass rush, their pressure rate is much lower at 26.2%, 12th in the NFL.

Coverage-wise, they play a mix of man and zone. A fair amount of Cover 6 and quarters defense. Cover 4/quarters is how Alexander recorded his interception last week.

Quarters allows the safeties to play closer to the LOS to stop the run while cutting the field into quarters, each DB responsible for his quarter of the field. If you watch Pitt football with Pat Narduzzi, you’ll see a lot of the same coverages.

Here is Cover 6 with a quarter-quarter-half shell.

It’s also interesting they will rush five but play a Cover 3 zone behind it. Still three-deep but only three under instead of four like it’s traditionally run. There will be more room to hit receivers underneath here. 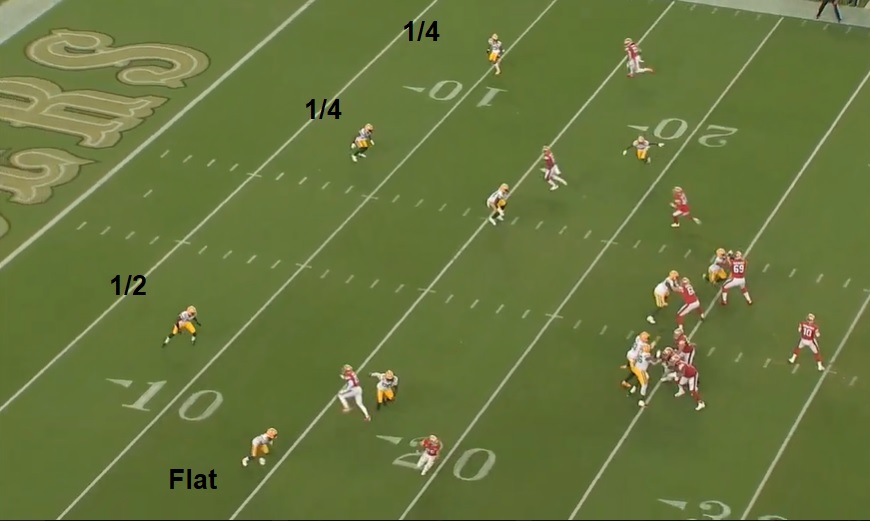 The trip to Lambeau Field is never an easy one. Green Bay has a way of putting a good product on the field year after year much like the Steelers. The past couple games the Steelers have dealt with strong inside pass rushes (Cincinnati) and outside pass rushes (Las Vegas) but this Packers groups is not as strong as those two groups. I think the defensive backfield has the most talent on the defense but can be had if they attack the right people.

Green Bay is considered a 3-4 defense but they’ll play multiple fronts.  Let’s take a look at the defensive roster and find out who are the playmakers.

Kenny Clark (97) is the name to know up front.  He’s listed at the nose tackle but will play along the interior. He has good quickness and a strong punch and gives interior offensive lineman nightmares with his strength.  He diagnoses quickly, has very good football IQ and uses power to push the pocket. Dean Lowry (94) is one of the defensive ends and is a high motor/high effort player. He can play from the 3 tech to the 6 tech and has the strength to stand up offensive lineman. He is better against the run and not a big pass rushing threat. Kingsley Keke (96) can play tackle or end and has solid lateral agility when engaged and uses a club/swim rushing the passer. He can be beaten at the snap by quicker players and can be caught by misdirection.

Clark (97) is lined up as the 1 tech and blows up the center into the quarterback and shows good speed and quickness chasing the runner to the outside.

The reserves include Jack Heflin (90) who has quick hands and strength with solid agility. He gives very good effort but is adequate as a rusher and when handling double team blocks. T.J. Slaton (93) has very good size and the strength to handle one-on-one blocks but needs to improve his anchor versus double teams.

Rashan Gary (52) has made a nice transition from collegiate defensive end to pro outside linebacker. He has good explosiveness, active hands and tenacity getting after the quarterback.  He has improved as a run defender, can set the edge and is a strong tackler. Preston Smith (91) is the other starter and can set the edge and uses his length, strength and relentless attitude to fight through or shed blocks. He has busy hands and likes to use a stab/swim combo to rush the passer.

Gary (52) reads the tackle moving inside and accelerates immediately and despite getting cut by the running back he slows the QB with one hand and gets up quickly to give chase.

Behind the starters are Chauncey Rivers (47) who is solid on the edge using a two handed swipe against blockers along with initial quickness to rush the passer but is just adequate shedding blocks.  Jonathan Garvin (53) has very good length, solid quickness at the snap and can close to the quarterback but needs to counter more constantly and be stronger on the edge.

De’Vondre Campbell (59) is a twitchy athlete with good acceleration to the ball.  He has good speed to chase to the sideline, a good tackling radius, solid in coverage and is used to blitz inside or on the edge. Krys Barnes (51) has good diagnosis skills and will use a long arm to hold off blockers. He has a good motor and acceleration to the ball, is a very good tackler and knows his role in coverage.

Oren Burks (42) is used often in passing situations especially in the red zone.  He has very good awareness reading the quarterbacks eyes and flows well laterally to get into passing lanes. He is used to blitz and take good angles in pursuit of runners. Ty Summers (44) is another sub package linebacker who is strong in coverage. He has very good athleticism and takes good angles to the ball but can be slow to process running plays. Isaiah McDuffie (58) is a rookie who plays primarily on special teams with very good aggressiveness and good speed to read and chase anywhere the ball goes.

Jaire Alexander (23) plays primarily on the left side that has good speed, change of direction and very good aggressiveness when attacking the ball in the air.  He diagnoses routes well and gets downhill very quickly playing in Zone. Kevin King (20) plays on the right side and missed some time in camp and during the season.  He is solid versus the run and is a better fit for Zone and will kick into the slot in nickel but has adequate balance and can be challenged.  Eric Stokes (21) is a rookie who plays on the right side in nickel.  He has top notch speed and while he can play Zone or Man he looks most comfortable in Press.  He is adequate versus the run and can be very grabby in coverage.

Alexander (23) is the corner to the top of the play and will drop into quarter’s coverage and shows good mental processing reading the route from the other side of the field and beating him to the spot for the interception.

Chandon Sullivan (39) is a quality slot corner and is sticky in coverage playing a physical version of Man coverage against bigger receivers/tight ends. He is used to blitz and a willing tackler against the run. Isaac Yiadom (24) has good side and adequate athletic ability who best fits on the outside and needs to improve his overall technique.

Darnell Savage (26) is fun, active player on the back end.  He aligns as the field side safety with good range, is very good coming downhill versus the run and pass and will sacrifice his body while being aggressive to the ball. Adrian Amos (31) is the boundary safety and will also play in the slot at times.  He won’t be a single high safety often and is better against the run playing in the box or tackling in space.

Vernon Scott (36) has good size, speed and length, has experience in the slot and deep in Cover 2 and is a solid tackler.  Henry Black (41) will come in in dime coverage to play deep and has good athleticism and solid speed to react to underneath coverage or help out in the run game.