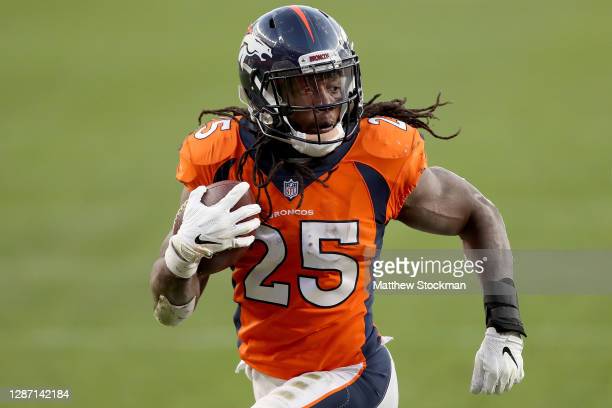 The bread and butter of this Broncos’ offense, a departure from past scouting reports and the world the NFL’s playing in. Buffalo, Las Vegas, and Green Bay were pass-first teams with first/second round, franchise QBs (ditto with Cincinnati on the latter, though they’re a more run-centric team). Two-headed attack led by veteran Melvin Gordon and rookie Javonte Williams. The two are pretty equal in production and playing time. Gordon has 51 carries, Williams 46. Gordon has played between 49-59% of the offense’s snaps this season, Williams has played between 40 and 51%.

Over the first three weeks, Gordon seemed to play more early in games than Williams, who came in late. Last week, Williams seemed to log time earlier in the game and ran well so maybe the tide is turning a bit. As a team, the Broncos have 13 plays of 10+ runs, tied for 11th most in football.

Schematically, they run a varied attack, just as Mike Munchak (now Denver’s OL coach, in case you forgot) but it’s built around a zone scheme. Inside and outside.

They will run power/gap runs, most often to the boundary side of the field. Which is a little interesting. Often see teams run to the field with more frequency.

Another interesting wrinkle. Usually on power, the back and the puller are aligned to the same side. If the LG is pulling, for example, the back will align to the QB’s left. Here, the Broncos have the RB aligned to the right with the LG pulling. Turns into a counter run and a nice change-up to mess with the LBs eyes/keys. Worth pointing out this gap run is to the field side.

Some other offensive stats. Denver scored 23+ points their first three games, wins over the Jets, Giants, and Jaguars. They put up only seven against Baltimore last week (Bridgewater did get hurt midway through the game). Denver is doing a good job taking care of the football with only three turnovers in four games, tied for fourth best in the league. Some areas where they’re really struggling are on third down and in the red zone. Denver has the 30th ranked third down team at 31.4% and the 28th red zone group at 43.8%. Pittsburgh’s defense must win in these areas.

As of this Thursday night writing, we still don’t know what QB the Steelers will face this weekend. Right now, I am presuming it to be Teddy Bridgewater, the Week One starter who is going through concussion protocol. Bridgewater has played really well this year, an efficient QB with a high completion percentage (72.1%) with five TDs and zero INTs. If Bridgewater can’t play, Drew Lock will start, who threw a pick against the Ravens filling in for Bridgewater last week. The good news is if Lock starts, the Steelers prepared for him in last year’s matchup (one where Lock left injured). So that’ll make the prep easier if Teddy can’t go.

The top receivers are a three-headed attack of Noah Fant and Courtland Sutton, each with 18 receptions, and the underrated, sure-handed Tim Patrick with 15 grabs. Fant hasn’t been used downfield much this year, averaging just 8.7 yards per grab while Sutton is averaging a very healthy 14.

Denver’s pass game has been more conservative. They have just one completion of 40+ yards this year. Not having speedsters like Jerry Jeudy and KJ Hamler have hurt them here.

Conceptually, Denver runs a good deal of playaction. One of their favorite play-passes is the Jon Gruden staple, Spyder 2 Y Banana. Three-level concept to the boot side and watch out for the Broncos possibly trying to throw the backside if the defense loses a RB/H-Back. Couple examples.

They do a nice job of using motion to uncover man or zone coverage too. Watch this TD to Noah Fant. Return motion to get a man-clue and then run Fant to the flat for the TD on a slant/flat combination.

Denver also runs a lot of Twin WR sets, two to one side. Because Pittsburgh rarely travels, that forces them to either walk down a safety or walk out a LB. Which isn’t ideal for the Steelers’ defense, especially if it’s the latter and a LB is removed from the run fit and is going to drop into coverage on a pass. 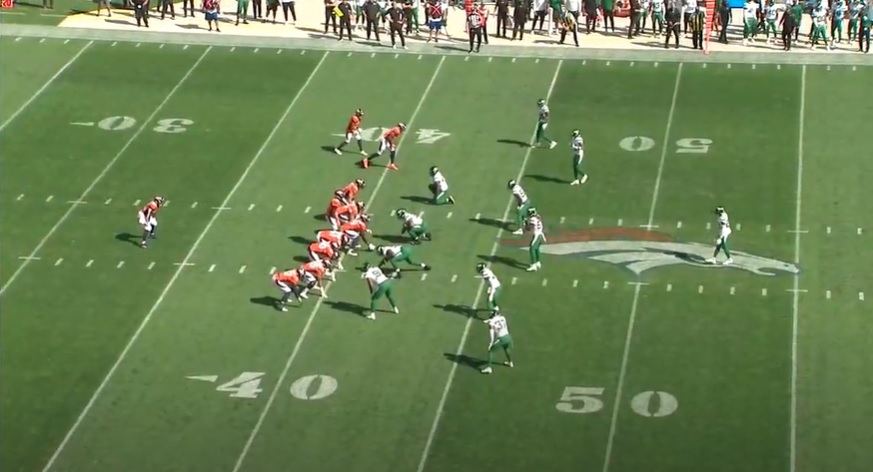 Sitting at 1-3 on the season, the Pittsburgh Steelers welcome the 3-1 Denver Broncos into town at Heinz Field on Sunday.

So far, that’s worked perfectly for the Broncos, who were off to a 3-0 start before Bridgewater was knocked out of the Week 4 loss to the Baltimore Ravens with a concussion, forcing former starting quarterback Drew Lock into the lineup, ultimately leading to a lackluster offensive performance from the Broncos.

Bridgewater is expected to start on Sunday against the Steelers, and gives the Broncos the best chance offensively. He still has a strong arm overall and has impressive ball placement and overall accuracy. Plus, he can extend the plays in the pocket due to his athleticism and feel for the pocket, which is greatly needed behind an offensive line that has struggled to protect him throughout the early portion of the season.

Offensively, Bridgewater has a ton to work with at receiver, including the likes of Courtland Sutton, Tim Patrick, Diontae Spencer, Kendall Hinton and David Moore. It’s a banged-up receivers’ room without KJ Hamler (torn ACL) and Jerry Jeudy (on IR due to a high ankle sprain), but it’s still a very good one with Sutton and Patrick leading the charge.

Patrick is a receiver I’m really high on. He’s a good possession receiver that can win in contested-catch situations. He’s also pretty good overall in run after catch situations, creating plays after the catch consistently with the Broncos.

Against the Jets in Week 3, Patrick sparked the Broncos’ offense with a terrific leaping catch through contact down the right sideline over a Jets cornerback, showing off his ability to win in those situations.

In Week 4 against the Ravens, Patrick showed off his ability to win in the middle of the field, taking the short catch, making a defender miss and picking up chunk yardage after the catch, moving the chains.

He can be a problem if he gets into an early groove.

At tight end, I really like the combination of Noah Fant, Albert Okwuegbunam, Eric Saubert, and Andrew Beck for the Broncos.

Saubert and Beck are terrific blockers and really factor into the picture in the run game, helping the Broncos run downhill against defensive fronts.

Fant really tends to succeed off of RPOs and play-action in the middle of the field, establishing a strong connection with Bridgewater early on this season.

He is a precise route runner and is pretty physical after the catch and has sure hands overall.

Part of having a balanced offensive attack is having a strong rushing attack. The Broncos certainly check that box with veteran Melvin Gordan and terrific rookie running back Javonte Williams.

Williams is a guy that I am very high on. I loved him coming out of North Carolina. He was in the discussion for RB1 for me, and he’s certainly looked the part right away in the NFL. This run against the Ravens in Week 4 was simply breathtaking.

It showed off everything I loved about his game coming out: vision, contact balance, the ability to break tackles and run behind his pads with consistency. Just a fascinating run.

He’ll be a handful for the Steelers’ short-handed front seven on Sunday.

Add in Gordon, who looks as healthy as he’s looked in years and has a real burst to his game early in the season, giving the Broncos a terrific combination in the backfield.

Check out the block here by Saubert, clearing a lane for Gordon, who then turns on the jets for the 70-yard touchdown in Week 1 against the New York Giants.

Up front, the group has struggled some, but it’s still a group that looks strong on paper and is coached by Mike Munchak.

Here’s how I expect them to line up on Sunday left to right:

Muti and Meinerz started in place of Dalton Risner and Graham Glasgow in Week 4 against the Ravens and should start there again on Sunday, should Risner and Glasgow – both limited in practice Thursday — miss the game once again.

Bolles has really found himself at left tackle and has solidified the position, while Massie has given the Broncos some stability at right tackle. The duo will have a tough task on Sunday against the Steelers’ outside linebackers.

How well the Broncos can run the football will determine the game, without a doubt.

On special teams, the Broncos have a terrific kicker in veteran Brandon McManus. He’s as consistent as they come at the position and has a big leg, even outside of Mile High.

Punter Sam Martin has quietly become one of the better punters in all of football and have given the Broncos a real special teams weapon that can flip the field.

Spencer remains a dangerous return man for the Broncos, giving them a home run threat on kicks and punts. Losing Hamler hurts the kick return game, but Spencer is a former All-Pro return man and is very reliable on punt returns.