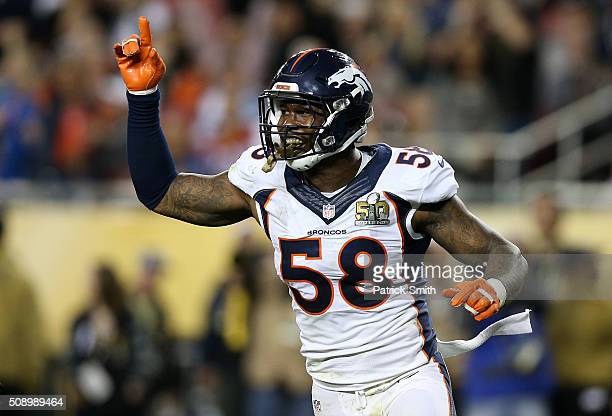 A strong output overall. Allowing just 3.5 yards per carry, tied for 5th best in the league. They haven’t allowed a run longer than 13 yards this season, the best in football, and only five runs of 10+ yards all year, tied for the league’s best mark. Denver runs a conventional, 3-4 front. Overall, they’re a gap-sound, fundamental group that doesn’t have many big names but solid, well-coached talent across the board.

Denver does a good job of spilling runs to the outside. Clog the interior and spill the ball outside to their EDGE guys. Tom will talk about it more in his report but Von Miller, if you haven’t heard, is pretty good. As a pass rusher first and foremost but he’s great out on the edge. Setting the edge, getting off blocks, making the play.

In some obvious run situations, like this 3rd and 1 last week against Baltimore, the Broncos did employ a 4-3 front. 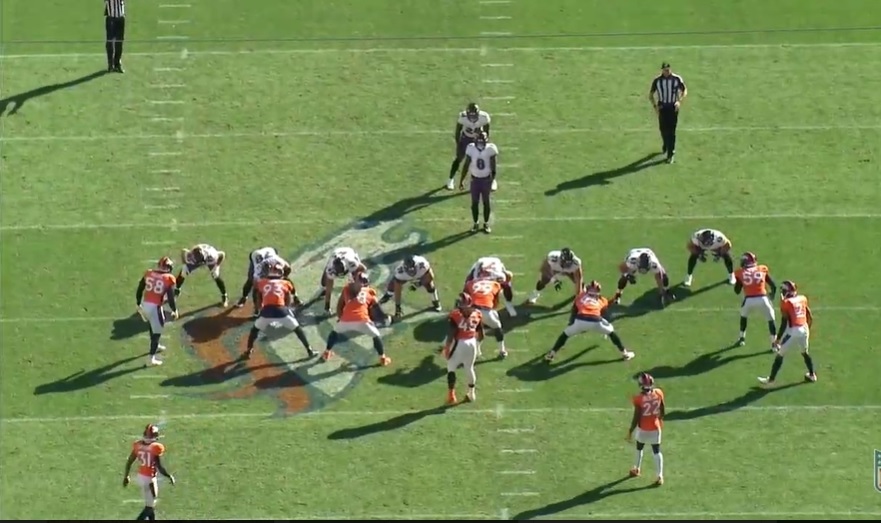 This won’t be an easy group to run on but if I’m Pittsburgh, I’m going to try to keep things between the B gaps. Wouldn’t try to run the ball wide. Power, downhill schemes. On zone runs, Denver strings things out too well and they take away the backside cut/bend read. This is a game where you know your run game will average 3.9 YPC but I think you can consistently get that if you don’t get cute about it. If you try to, you’ll have too many negative plays.

Overall, this is a hard team to figure out even a month into the year. You can only play who is on your schedule but the Broncos have beat the Jags, Giants, and Jets. Three teams who are a combined 2-10 this year. They played Baltimore last week and put up only seven points in a pretty lopsided loss. They’re not a bad team, especially their defense, but how good are they? I think everyone is trying to figure that out. At least I am.

Some other stats. Safety Kareem Jackson is their leading tackler with 21 of them. Their third down defense is middle of the pack, 15th at 39.6%, with their red zone defense being the best in football at 33.3%.

A good group overall both in rush and coverage. Overall, this defense is allowing just 12.3 PPG this season, second best in football, but like I noted above, is that a product of who they’ve played? They allowed 23 to a much better Ravens’ offense after giving up no more than 13 points per game the first three weeks.

The Broncos’ defense has 11 sacks this season. Von Miller leads the group with 4.5 while safety Caden Sterns has two of them, both last week against the Ravens. Their blitz rate is high, 34.6%, 4th most in the league, while their pressure rate is 9th at 27.2%. In the games I watched, the Broncos didn’t blitz a ton, but routinely sent their front five when playing in their base defense. They did blitz Baltimore late in the first half so they seem to pick their spots as to when to be aggressive.

They bluffed the Ravens into this sack. Fake the LB coming and blitz the safety from the other side. Gets Lamar Jackson to the ground.

Denver has four interceptions this season, each by a different DB. The guy to watch out for is #31, FS Justin Simmons. One of the best in the game. Especially against the Jets, they ran Cover 1 Robber/Lurk on 3rd down against 3×1 sets, often rotating and spinning down on the snap of the football. Watch out for him or a safety in the middle of the field. Guessing Pittsburgh will keep things on the outside on third down, as is normally their plan.

Also a good deal of Cover 6 against 2-back and on early downs. Overall, they play more zone than man coverage.

The Broncos are off to a fast start. Part of that is who they played but part of it is the defense.  They have played well through the first quarter of the season.  The defensive line likes to uses T/E and E/T stunts to get pressure, the linebackers and safeties are very aggressive coming downhill and they’ve build a quality group of corners.

Denver runs a base 3-4 defense and they have some play makers.  Dre’Mont Jones (93) is a defensive end and a disruptor.  He has good snap quickness and likes to shoot gaps versus the run and also has good lateral agility and quickness to side step blockers when pass rushing.  Mike Purcell (98) has good size, solid lateral agility and the play strength to stack and shed blockers.  He is a solid run defender and good acceleration to the QB with a clear lane.  Shelby Harris (96) is the other defensive end and uses his active hands and length well with a high motor to reset the line of scrimmage and get after the ball.  He and Jones will shift inside on passing downs

The reserves include veteran Shamar Stephen (99) and he can play tackle or end, processes the play well and has short choppy steps when rushing the passer but does a nice job of getting his hands up in throwing lanes. DeShawn Williams (90) also has versatility despite being somewhat undersized. He has a good motor and works hard to split double team blocks.  McTelvin Agim (95) saw his first action last week and is quick off the ball, plays with good pad level and has quickness to the ball after beating the block.

Jones (93) is lined up over the right guard and will beat the centers block, drive into the backfield and make a stop for big loss.

Von Miller (58). You know who he is and what he does. Fantastic snap quickness, hand usage and bend to rush the passer but he also has very good mental processing versus screens and can set the edge.  The Steelers should chip him often this week. Malik Reed (59) plays on the other side and is a high motor player with solid get off who is better going around blockers than through them. He’ll chase the ball anywhere.

The back-up OLB’s are young and inexperienced and they include Andre Mintze (48) who mixes up his speeds well and has heavy hands when he comes in to spell Miller.  Jonathan Cooper (53) usually plays on the right side has good up field acceleration, has a bull rush but is a tad slow at the snap.

Yes, Miller (58) can rush the passer but he can play the run too.  He will take on and stun the pulling left guard before making the tackle.

These inside linebackers never met a gap they didn’t want to shoot through.  I think play action could be useful against them.  Alexander Johnson (45) has good acceleration and agility, adequate in Zone coverage but can get stuck on blocks.  He will be used to blitz and even put his hand in the dirt at times. Justin Strnad (40) flies to the ball and loves to hit.  He gets downhill quickly and can be used to blitz.  In coverage he has solid mobility in Zone but Man coverage is not his strong suit.

Micah Kiser (43) was released by the Los Angeles Rams earlier this year and is more of an old school thumper with adequate athletic ability but plus mental processing and takes very good angles to the ball. Rookie Baron Browning (56) has good size and length and has explosiveness while playing to the whistle.

Very good agility from Johnson (45) when blitzing up the middle and jumping to the left to avoid the blocker to get the sack.

The left cornerback is Kyle Fuller (23) a veteran signed in the offseason. He was an All-Pro while playing for head coach Vic Fangio in Chicago. He’s comfortable playing in Man or Zone coverage, has good change of direction and is a willing tackler in the run game. The right cornerback is rookie Patrick Surtain II (2) who is best suited to play Man coverage.  He has good feet in Press to mirror receivers, has consistent technique and fluid in his movements playing under control. Bryce Callahan (29) is an undersized nickel corner who plays with toughness, ball skills and good coverage ability.

Nate Hairston (27) is the veteran reserve corner who can play inside or outside, is a solid tackler and has starting experience.  Kary Vincent Jr (35) is a rookie who best fits in the slot. He has very good speed, athleticism and good change of direction. Mike Ford (12) was an offseason signee who’s a strong special team player with good size and speed, explosiveness and solid tackler but lacks length.

Surtain is at the top of the screen and will cover his receiver for about 8 seconds before showing closing speed to break up the pass.

The Broncos safeties work downhill very well and are both willing in the run game.  Justin Simmons (31) is the free safety and plays to the field side.  He has good range to play the single high and can cover in the slot as well.  He is aggressive in the back and is a strong tackler.  Kareem Jackson (22) is the strong safety playing to the boundary side and is best coming down hill to play receivers in front of him.  He is a willing tackler and will race to fill lanes or get in the backfield to play the run.

Caden Sterns (30) will come in on dime and play in the slot primarily covering the tight end. He’s an aggressive hitter with good speed and explosiveness.  He already has three pass breakups, two sacks and an interception in just 35 defensive snaps. P.J. Locke (37) was a UDFA signed by Pittsburgh in 2019, plays on special teams and likes the big hit. He has good size and versatility to be used in different roles

Simmons (31) is the safety to the near side. Watch him read the QB and accelerate downfield to beat the receiver to the ball for the interception.