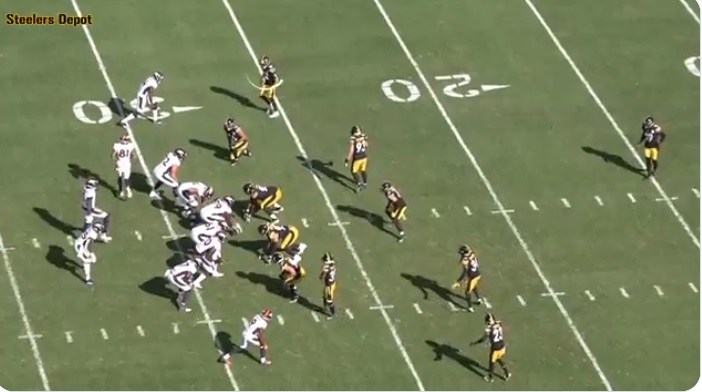 In a dire need for linebacker depth, the Steelers traded for veteran MLB Joe Schobert before the season began.

Formerly of the Browns and Jaguars, Schobert is now in his sixth season in the NFL, racking up 583 combined tackles and nine interceptions in the process. He’s played in 88% of the Steelers snaps this season, but continues to learn the system as he’s played just five games in black and gold.

Growing pains clearly come with learning curve, especially with the Steelers missing a few key defensive members. On Sunday, the Steelers held a 24-6 lead at Heinz Field against the Broncos with just over 12 minutes remaining in the game. On a 4th-and-2 at the Pittsburgh 28-yard line that would’ve all but ended the Broncos’ hopes of a comeback, Denver wideout Courtland Sutton broke wide open for a 25-yard gain down to the three-yard line.

Miscommunication between James Pierre and Joe Schobert here. Both take No.2 to the outside. Joe lets him know after the play. #Steelers pic.twitter.com/S3yu2opMbk

A clear miscommunication on the play between he and young corner James Pierre,  Schobert talked about it Thursday.

The misunderstanding was a big one. The Broncos ended up scoring a touchdown shortly after and crawled their way back into the game. As a vet, Schobert knows small mistakes like those are ones that can cost teams games.

”We talked about it with the coaches on the sideline right after and got it figured out and ironed out. And obviously we were able to win the game, so it wasn’t as big.”

Certainly a bullet dodged by the Steelers’ still-evolving defense. Avoiding that particular mistake would’ve given the ball back to the Steelers in all likelihood with an 18-point lead.

Schobert has still been a huge addition to the defense, particularly due to Devin Bush not being fully healthy. Lineman Cameron Heyward mentioned Schobert in his press conference Thursday in how crucial his play has been for the team. His leadership continues to be key as well for the young linebackers behind him.