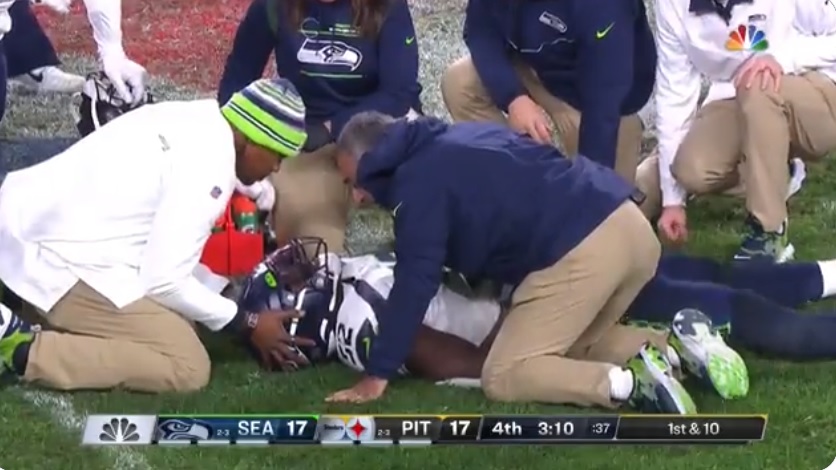 An emphatic Heinz Field crowd was brought to a halt during the fourth quarter Sunday night.

With the Steelers offense driving near enemy territory late in the game, three-year defensive end Darrell Taylor went in for a tackle on running back Najee Harris. Taylor ended up colliding with fellow teammate Al Woods, a 330 lb. defensive tackle. In the process, it seemed Taylor’s neck hit Woods’ midsection head-on before falling down.

The game was brought to a stop for a good few minutes and quarterback Ben Roethlisberger talked after the game about the scary moment.

“It’s really tough. You know, going through it,” he said in his post-game per the team’s YouTube channel. “It’s hard to refocus after something like that.”

Taylor’s enjoyed a breakout 2021 season to this point, accumulating four sacks and a forced fumble heading into Sunday night’s tilt. The moment obviously brought both the Steelers and Seahawks and all members of their squads out onto the field. Players from each team were visibly shaken up from the whole situation. Taylor had to be stretched off and taken to a nearby hospital. Thankfully, the NBC broadcast reported Taylor is moving all his extremities. The moment brought back a certain memory for Roethlisberger.

”With Ryan [Shazier], brought back a lot of memories. I wish him nothing but the best, our prayers are going to him and his family.”

Roethlisberger’s of course referring to former Steeler linebacker Ryan Shazier and the incident in a 2017 game that left him temporarily paralyzed. That game would be Shazier’s last in the sport of football and is something that still sticks with Steelers fans and players.

Shazier, now watching on as a spectator, can obviously relate to that scary moment on the field. In situations like these, football obviously becomes the last thing on everyone’s minds. From a fan point of view, it makes you wonder just how the players go back to finishing out the game just minutes after seeing that. Prayers out to Darrell Taylor and his family and hopefully some more positive news on him in the coming days.

Ed Note: According to Pete Carroll via Gregg Bell, Taylor’s tests came back negative and he will fly back with the team tonight. Terrific news for a scary-looking injury.

Taylor is flying back with the #Seahawks to Seattle tonight. Big relief for everyone here in Pittsburgh. https://t.co/TcnmbFJnHM