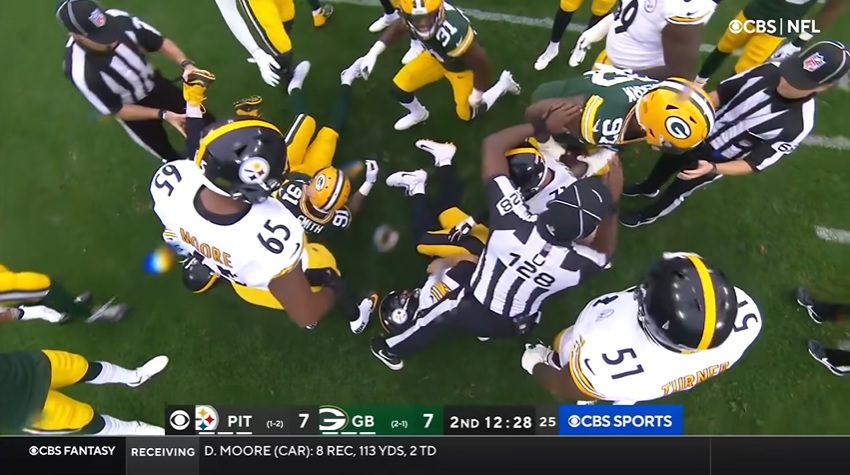 Breaking down the pair of sacks allowed by the Pittsburgh Steelers against the Green Bay Packers in their Week 4 loss.

Two players to circle here. LT Dan Moore Jr. and RG Trai Turner. Both guys struggle with power rushes, getting walked back and collapsing the pocket into Ben Roethlisberger. Moore tries to win a lot of reps early with his hand use but he isn’t able to here and the RDE gets into his chest and bullrushes him backwards. Turner catches the rush of #96 but can’t anchor and also gets pushed back.

Roethlisberger runs out of room, can’t even really step up with how squeezed he gets. Turner’s man knocks the ball out while Moore’s guy grabs Roethlisberger by the back of the jersey and pulls him hard to the ground. The Packers recover the ball and put it in the end zone. Big swing in the game.

Putting half the blame on each man here, Turner and Moore, for allowing that interior pressure that completely collapsed the pocket.

Blame: Half on Turner, half on Moore Jr.

Again, eyes on the left tackle Moore here. Going against former first-round pick Rashan Gary. Gary uses the long-arm to get into Moore’s chest and then sheds as he reaches Roethlisberger. Moore just looks a little tall here and is definitely out-leveraged. Gary is able to basically jump on Roethlisberger’s back and wrestle him to the ground.

Another first down sack given up by the Steelers, a negative play on 1st and 10 that leads to a 4th and 5 incompletion. This was actually a five-yard sack so on paper, the five yards they needed on fourth down were lost here.