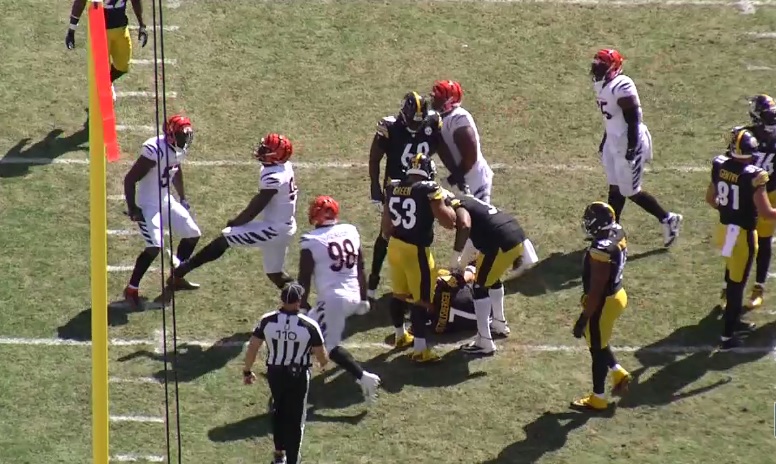 Going over the *sigh* four sacks allowed by the Pittsburgh Steelers to the Cincinnati Bengals in Week 3. We’ll assign blame for each and update our sack and penalty trackers throughout the year.

Steelers went max protect a lot in this game in an effort to give Ben Roethlisberger time for shots downfield. Two man routes with everyone else in to block (or leak out after initially blocking).

But no one got open on these concepts. As you can see, Eric Ebron nor Chase Claypool initially create space, though these routes take time to develop (especially Claypool’s). 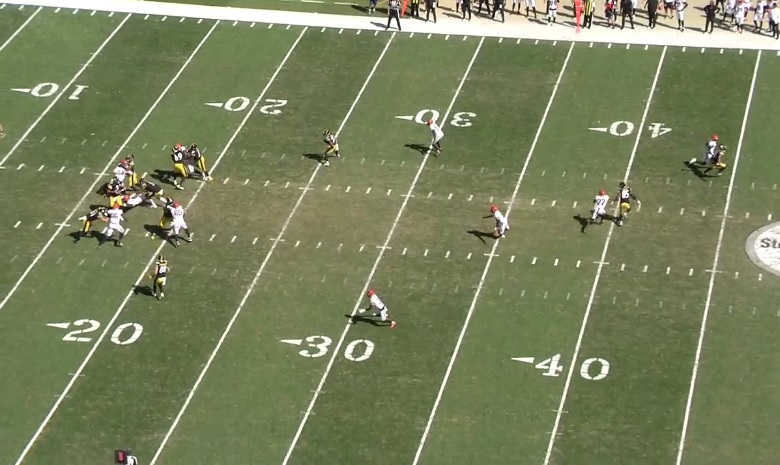 By the time Claypool ran his route, Roethlisberger is under pressure, moved off his spot, and is taken down. So how was there pressure against just a five man rush? Let’s take a look.

Initially, the Steelers slide to the right with Kendrick Green and Trai Turner doubling up the 1T. Green is using his backside hand/arm to while using his eyes to search for any blitz or green dog (a rusher attacking because an eligible stayed in to block). Which is a good coaching point. But no one blitzes. And for…some reason, Green leaves Turner and starts working the other way despite no player coming into the A gap. 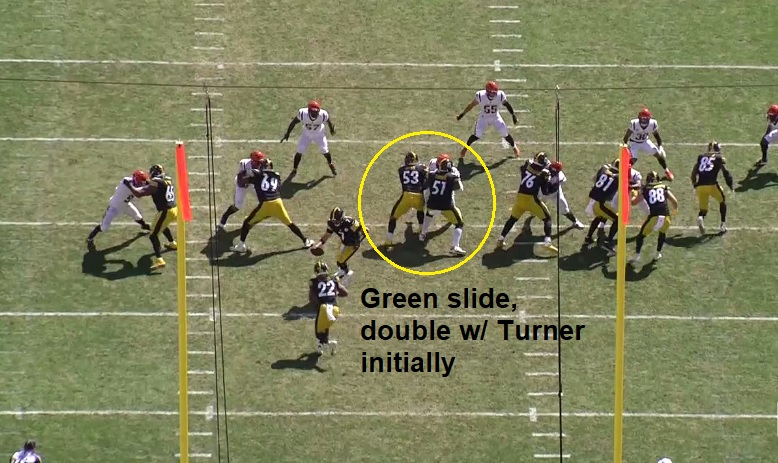 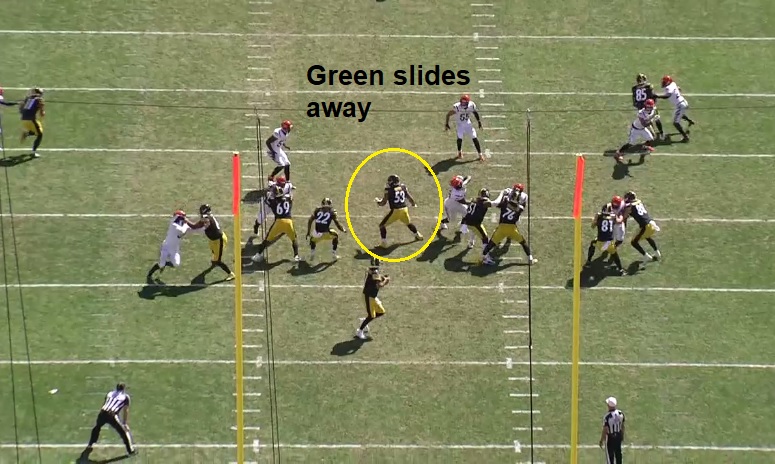 That leaves Turner one-on-one playing the outside half of his man. It seems like he thought he was still going to have help with Green attacking half-man to the inside. Green left, Turner was no longer in a good position, and the DT gets pressure up the middle. 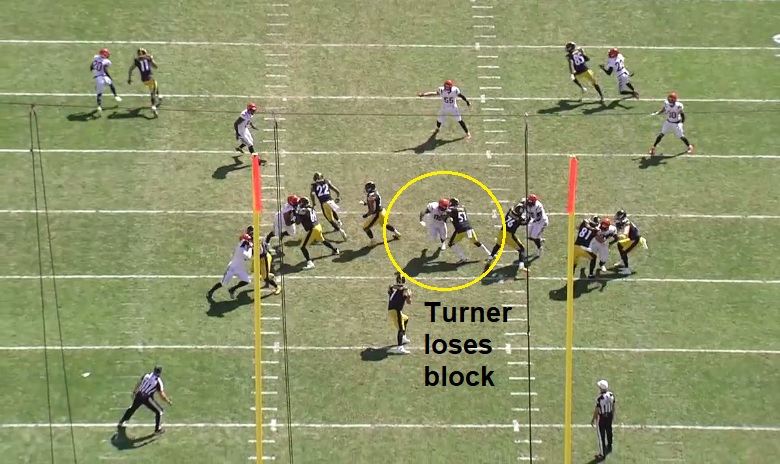 That forces Roethlisberger to move and Zach Gentry’s man works off his block and drops him for the sack. While this one looks like it’s on Turner because that’s “his man,” I’m not sure what Green was doing here looking for work when he was already covered up pre-snap and blocking initially. It’s not like Kevin Dotson needed help or was losing his block to Green’s side. Weird moment.

Another max protect, two man route. And again, nothing open downfield for Roethlisberger. 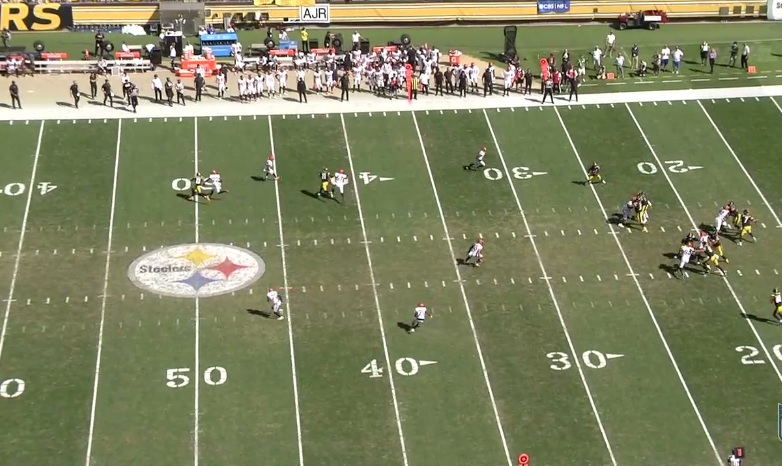 Roethlisberger waits it out as long as he can but at some point, he’s gotta throw this football away. Tries to do too much, a recurring theme with him lately, and he gets dropped for a loss of five instead of throwing the football away. Or he could’ve hit a checkdown option sooner.

Know it’s rare for Roethlisberger to do and there was a time where this was his style but anymore. This one is on Roethlisberger.

Not much open here initially for Roethlisberger as he scans the field. He comes across to James Washington, who was initially open, late but the CB drives and covers it up, forcing Roethlisberger to pump fake.

On the line, LT Dan Moore Jr. struggles to seal the edge against RDE Trey Hendrickson who is able to rip through and corner. Roethlisberger steps up, gets tripped, and Hendrickson catches him from behind. Moore’s hand placement missed here and he never had great control of the block. He does a decent job to re-position his hands but Hendrickson takes control of the rep.

Really nothing open for Roethlisberger here. If he throws the screen at the top from the far hash, the CB (with eyes on the QB) is either going to jump and pick it or crush the WR. 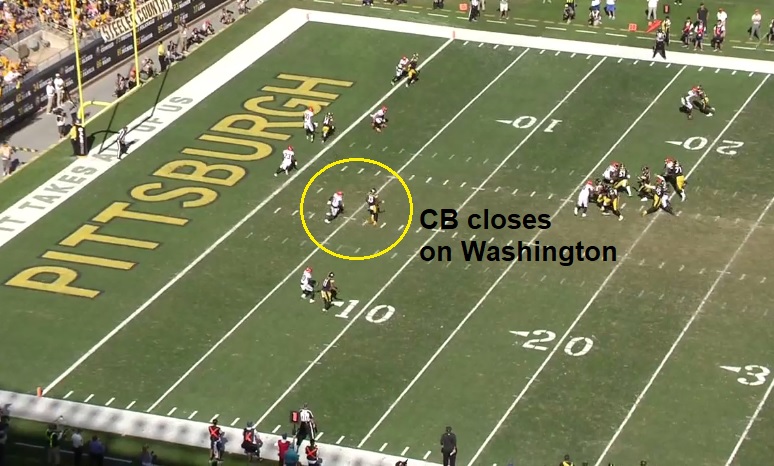 On the line, RT Joe Haeg (replacing Chukwuma Okorafor) loses the edge at the top as the LDE runs the hoop and beats him. Haeg’s feet stopped moving at the end to give up the corner. Nice rush by Sam Hubbard to long arm and then disengage and rip through the block for the sack. Down goes Roethlisberger for a fourth time.

Worth noting all four of these sacks were allowed on first down. Six of Roethlisberger’s eight sacks have come on first down this season. Those six are tied for the most on 1st down in the league with the New York Jets. Big reason why this team is consistently finding itself in 3rd and long.