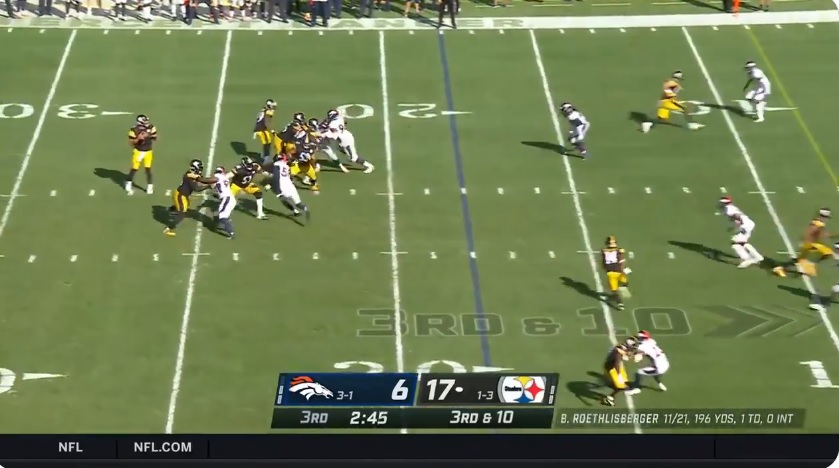 Stop the presses. The Pittsburgh Steelers’ completed a pass down the middle of the field. And it was a big one. After a Broncos’ penalty kept a Steelers’ drive alive, Ben Roethlisberger hit Chase Claypool for an 18 yard score between three defenders, putting Pittsburgh ahead 24-6 late in the third quarter. In a game where Denver stormed back, the Steelers needed every point and cushion they could get.

After the game, Roethlisberger broke down what he saw on the play.

“Coach Canada had heck of a playcall,” Roethlisberger told reporters after the game. “We had something set up. We put Chase on the inside. It was actually a double move outside to Diontae. And they kind of slacked off him and there were two high safeties and I knew Chase was going down the middle. So the best thing I could do is try and keep the safety left for as long as I could and just trying to deliver it close to where he can make a play. And he did the rest. The line gave me great time.”

Pittsburgh’s been reluctant to use that real estate for most of this season (and throughout 2020). Some of that is dictated by coverage. If defenses are playing with a single high safety, middle of the field closed, throwing that pass is a way to get intercepted or your wide receiver lit up. When defenses play with a two-high shell, as Denver did on that play, the middle of the field opens up. It’s still a tight window in the red zone but Roethlisberger made a strong throw and Claypool came down with the catch between three Broncos’ defenders.

The Steelers won the game of situational football. That was a 3rd and 10 conversion, one of seven third downs (58.3%) Pittsburgh hit in this game. Denver, meanwhile, went 5/16 (31.3%) on third and fourth down. Pittsburgh found the end zone on both of their red zone trips while the Broncos went just 1/3. Win by significant margins on third down and in the red zone and you win most ballgames.

Now, the Steelers will look to do it again next Sunday night against the Seattle Seahawks, who will be starting backup Geno Smith. If they can do that, and Steelers’ fans know there are no guarantees, they’ll be back at .500. Still a mountain to climb in a tough AFC North but they’ll have taken big steps at getting back into the playoff conversation.