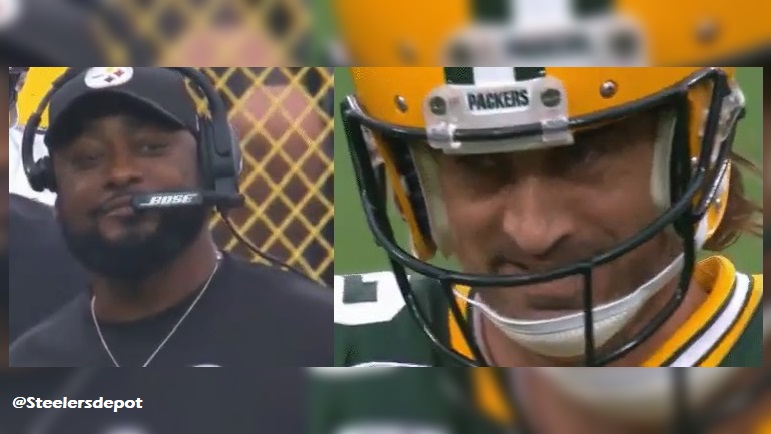 In the first half of the Pittsburgh Steelers Sunday loss to the Green Bay Packers, the television cameras caught a very entertaining exchange between head coach Mike Tomlin and quarterback Aaron Rodgers. The exchange between the two came after Tomlin called a timeout due to Rodgers about to catch the Steelers defense with too many players of the field. Tomlin was again asked about that Sunday exchange with Rodgers during his Tuesday press conference, and specifically about what it is that he appreciates about the Packers quarterback and the competitive level he has.

Tomlin on Sunday moment with Rodgers:
“It’s chess, not checkers. If you’re a competitor, you love being in that environment. You love pitting you skills and talents and preparedness versus people like those guys, led by a guy like that guy." #Steelers pic.twitter.com/MwTShkCUQ5

“You know, it’s chess, not checkers,” Tomlin said. “If you’re competitor, you love being in that environment. You love pitting your skills and talents and preparedness versus people like those guys [the Packers], led by a guy like that guy [Rodgers]. And as I mentioned, particularly in his venue, because of the latitude it provides him in terms of getting in and out of things at the line of scrimmage and having the ability to thoughtfully change pace, whether to speed it up or slow it down, the challenges that that brings.”

After Sunday’s game ended, Rodgers had a detailed response about the cameras catching his exchange with Tomlin and all that did was continue to fuel heavy speculation that the Packers quarterback is angling to become a member of the Steelers in 2022. On Tuesday, Rodgers was again asked about his Sunday exchange with Tomlin during his weekly appearance on ‘The Pat McAfee Show.’

“I’m a big Mike Tomlin fan,” Rodgers said. “I have been for a long time. I like the way that he speaks about his team. I like the way that he goes about his business. You know, I like his confidence. I’ve heard nothing but good things from guys that have played there. I like Mike Tomlin. And I also liked that he called that timeout. We tried to catch them with 12 on the field. He was kind of smirking about it. I liked that and I respect that.”

Rodgers was then asked during his Tuesday interview if he knows that the stir he’s now created with Steelers fans because of his recent comments about Tomlin and his Sunday exchange with the head coach will essentially likely continue on and well into after the 2021 season ends. Rodgers then essentially shot down the notion that he’s undoubtedly looking to be a member of the Steelers in 2022.

“Look, I’m just speaking the truth,” Rodgers said. “They asked me a question about Mike Tomlin, I’m going to tell them how I feel about Mike Tomlin. If you want to take that and run with it and say, you know, I’m angling for some sort of next team or something, I’m not. I’m just answering a question about my respect for Mike and what he’s accomplished in the league. And the same for, you know, when i talked about Ben [Roethlisberger]. A lot of respect for everything he’s accomplished over the years.”

I’ve said all along that I will be shocked if Rodgers winds up being a member of the Steelers down the road. Sure, it’s fun to think about such a thing happening, but the fact of the matter is that Rodgers just has a ton of respect for Tomlin as a coach and as a person and it’s nothing more than that. In short, the Sunday exchange between Tomlin and Rodgers was just game recognizing game and nothing more. It was just mutual respect in its finest hour between two likely Hall of Famers on the hallowed grounds of the legendary Lambeau Field.