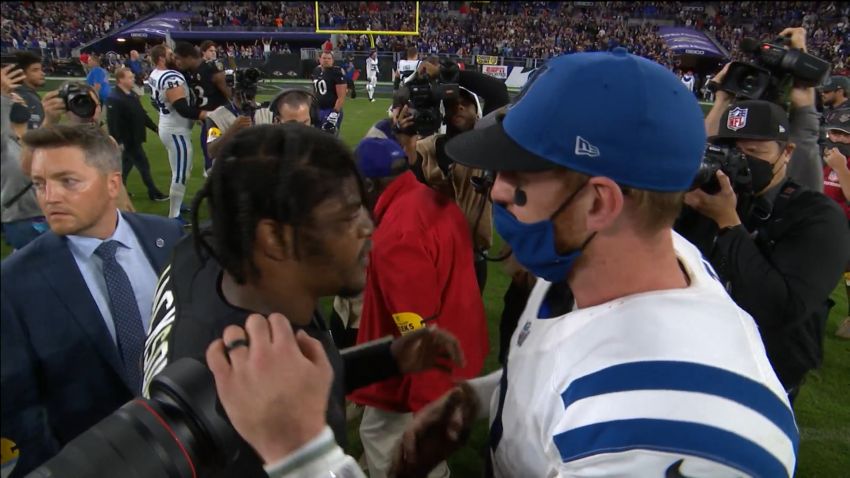 The Baltimore Ravens were thrilled to set a record in last night’s huge come-from-behind victory over the Indianapolis Colts, in which they erased a 19-point deficit, the largest since Lamar Jackson took over at quarterback midway through the 2018 season.

That record, however, was not the one that they spent the past few weeks pretending to care about. In fact, they didn’t even come particularly close to it. They needed 100 rushing yards as a team to extend their consecutive 100-yard rushing games to 44, which would have broken a tie with the 1970s Pittsburgh Steelers teams. Despite going into overtime, they finished with 86 yards, 62 of them coming from Jackson.

That’s because they spent most of the night trailing, and that forced Jackson and the Ravens to put the ball in the air, leading to unprecedented numbers in the Jackson era. He completed a stunning 37 out of 43 pass attempts for 442 yards, shattering his previous record for just his third or fourth 300-yard game of his career, also tossing four touchdowns, the game-winner coming on the opening drive of overtime to his favorite target, tight end Mark Andrews.

Not only did he set a franchise passing record, he also posted the highest completion percentage in a 400-yard or 40-pass attempt game in NFL history. It was just his second game of his career with 40-plus pass attempts, the first being a week-three loss to the Chiefs in 2019.

And he has thrown for 1,513 yards, averaging more than 300 yards per game, though he has only thrown for at least 300 yards in two of the five games played. He doubled his touchdown pass total from four to now eight, and he did not throw an interception, his total on the season standing at three.

He did, however, have a huge fumble at the goal line, which eventually led to the Colts quickly scoring a touchdown on the ensuing drive. It was initially ruled a touchdown on the return, but Darius Leonard was flagged for an illegal forward pass hen he attempted to lateral the ball to Isaiah Rodgers.

But it was the Ravens who won, and, while it came up against a banged-up secondary, it was Jackson and his arm—certainly not the running game—that won the day. Andrews caught 11 passes for 147 yards and two scores, while Marquise Brown caught nine passes for 125 yards and the other two scores. Nine different players caught at least two passes.

Le’Veon Bell was not called up from the practice squad this week to participate.