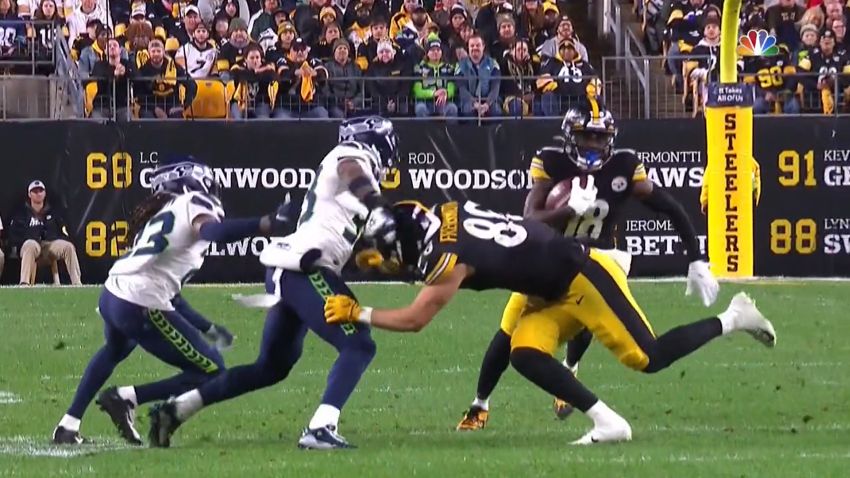 Pittsburgh Steelers rookie second-round pick Pat Freiermuth has developed into the team’s number one tight end, the only one of the three on the roster that has been on the field for at least 50 percent of the team’s offensive snaps. It’s not a landslide, however, as both Eric Ebron and even Zach Gentry are getting their share of playing time.

It was inevitable from the moment that he was drafted, of course, that Freiermuth would be destined for the number one role. He was named a co-starter at the beginning of the regular season, which was a slight surprise, but he has so far proven to be worthy of that confidence, even as he grows on the job—both as a receiver and a blocker.

“I definitely got adjusted to the game, blocking-wise”, he told reporters earlier today. “I think I’ve created some pretty big holes for Naj and the other running backs. But obviously it’s always a learning process and improvement process. I’m just gonna come in every single day and listen to [tight ends coach Alfredo Roberts] and the other tight ends on how they block and what kind of things they see”.

Freiermuth billed himself as a complete tight end coming out of college, and that’s why the Steelers were interested in him. It’s the model that they have long sought in the position, and so far, he’s showing the indications that would lead you to believe he does have that sort of ability.

While he still has work to do as a blocker, you can see the progress being made over time, though some of that is just getting used to the NFL. He admitted that he “probably” saw a bit less playing time earlier on than he might have otherwise du to “getting used to the blocking ability in the NFL”, but added, “I think it was just kind of more getting used to game speed and getting used to the feel of the game out there, because it’s a lot faster than college”.

He does appear to be adjusting well to the speed of the game, including as a receiver, and quarterback Ben Roethlisberger is beginning to look for him more. He was targeted seven times on Sunday, catching all seven passes for 158 yards. He has 18 catches on the season now for 158 yards and one touchdown.

And he’s contributed positively to a number of the Steelers’ most successful runs, as well. As you see in the header image, he was out in front blocking for wide receiver Diontae Johnson on his 25-yard end-around on Sunday. He was on the play side of Ebron’s one-yard rushing touchdown as well—though he didn’t have to touch anybody.