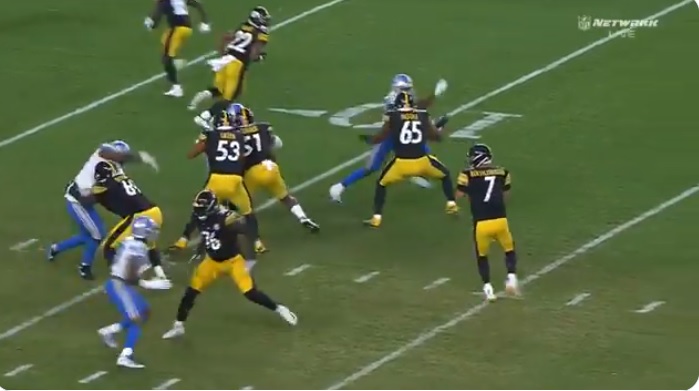 Through the first three games of the 2021 season, the Pittsburgh Steelers appear to have picked up right where they left off in 2020 on the offensive side of the ball. The run game is nonexistent up to this point, averaging a meager 53 yards per game on the ground which remarkably is even worse than the 84 yards per game average that ranked dead last in the league last season. The team is second-to-last in rush attempts, seemingly abandoning the running game altogether as the game wears on. While you would like to see more of a commitment to get the ground game going, the play upfront by the offensive line hasn’t exactly inspired confidence.

The 2021 unit has been completed remade from the starting unit the previous season with only RT Chukwuma Okorafor being the lone returner at his starting position from last season. This only is the case because Zach Banner was placed on short-term IR to begin the year, making Okorafor move from playing the LT spot back to the right side. This has allowed rookie fourth-round pick Dan Moore Jr. to get the nod to protect Ben Roethlisberger’s blindside after impressing in preseason action. Rookie third-round pick Kendrick Green got the nod to be the starting center to replace long-time stalwart Maurkice Pouncey and the team acquired RG Trai Turner vis free agency after surprisingly cutting David DeCastro due to complications with his ankle.

LG Kevin Dotson started three games in 2020, but mainly played behind Matt Feiler who since left to sign a FA deal with the Los Angeles Chargers. Now Dotson has stepped in as the full-time starter in the same position. While the unit boasts a lot of youth and potential, it has yet to culminate into production on the football field. There has been no cohesion to begin the season as there is constantly a free defender running to the ball due to missed assignments in the blocking scheme with often multiple linemen missing blocks. As I have mentioned previously, rookie RB Najee Harris does need to shoulder some of the blame, but a vast majority falls upon the ineffectiveness upfront along the offensive line.

The offensive line has been criticized by many including former Steelers RB Merrill Hoge recently stating that “they get no movement” in reference to the running game. Too often we have seen Green get walked back by the nose tackle across from him or watch Okorafor pop a defender initially then let up after his initial punch. To make matters worse, the pass protection hasn’t been there either in the first three games with Roethlisberger getting sacked eight times. For reference, Ben was sacked 13 times in 15 games played last season. There are moments where you see the aggressiveness and physicality that OL coach Adrian Klemm wants to instill, but the lack of consistency and low moments far outweigh those bright spots so far.

While the offensive line has made life hard or Ben Roethlisberger so far in 2021, Ben isn’t without blame here, either. The 39-year-old QB looks to be on his last legs out there, failing to connect on the deep ball and showing numerous instances of terrible ball placement on his throws, not giving his receiver a chance to make a play. He never challenges the middle of the field as Dave Bryan has pointed out before, allowing defenses to play in a single-high safety look and sit on the short throws, daring Ben to beat them deep with his arm down the sideline. He looks archaic in the pocket, not having the mobility to evade pressure and string plays out the way he used to.

So, this begs the question: regardless of how the 2021 season turns out, should Pittsburgh prioritize finding the future successor to Ben at QB or look to build up the offensive line? It is often stated that if you don’t have a franchise QB at the helm, you aren’t really in contention to make a title run. Hence why we see many teams every draft season sell the farm in terms of draft capital to move up to the top of the draft order to select a premiere QB prospect that has the chance to lead the franchise for the next decade.

However, should the atmosphere around this rookie QB not provide enough support to help them win games, often times we see these promising prospects flame out due to broken confidence and the inability to develop and adjust to the speed of the NFL game. Take, for example, Sam Darnold who flamed out in New York due to a poor supporting cast and offensive system around him with Adam Gase at the helm or most recently Trevor Lawrence and Zach Wilson, who went first and second overall, respectively in the most recent draft class, struggle to get a footing for the NFL game.

This isn’t to say that their careers are doomed by any means, but both players lead the league in turnovers and remain searching for that first win whilst running for their lives, trying to create something out of nothing due to the lack of talent around them. That is why we often see the strategy of teams sitting their young QBs in attempt to bring them along slowly and allow them to adjust to the NFL game before throwing them into the fire. The Kansas City Chiefs famously sat Patrick Mahomes for nearly an entire season before giving him the reigns in Year 2, eventually going on to win the NFL MVP and become what he is today.

Knowing this, we have to look at the situation in Pittsburgh and determine whether or not a rookie QB would have the pieces available around him to be successful or whether it would be more prudent to fortify the offensive line before plopping in the future of the franchise. As far as skill positions go, Pittsburgh looks to be in good shape with Najee Harris, Anthony McFarland Jr., Diontae Johnson, Chase Claypool, and Pat Freiermuth all young and under contract heading into 2022. Hopefully, we see the likes of Dan Moore Jr., Kevin Dotson, and Kendrick Green show some growth over the course of the rest of 2021, giving confidence that one if not more can be a long-term solution at their respective positions.

Zach Banner is also under contract for 2022, meaning we will get a long look at him as well when he returns to see if he can competently man the RT spot next season. Overall, there are plenty of promising QB prospects in this upcoming draft class: Sam Howell, Carson Strong, Malik Willis, and Matt Corral to name a few. However, should the environment not be right for one of these prospects to succeed at the next level, the potential to bust drastically increases. Hence why players including Rasheed Walker, Evan Neal Jr., Trevor Penning, Kenyon Green, and other top prospects at offensive line need to be thoroughly vetted to determine if one can be a mainstay that fortifies the unit for the future.

What are your thoughts on the current state of the offensive line and QB situation in Pittsburgh? Should the Steelers look to lock down their future successor to Ben Roethlisberger as early as this offseason, or should they look to build up the trenches first to improve the running game and provide protection for whoever lines up under center going forward? Please leave your thoughts in the comments section below and thanks again for reading!